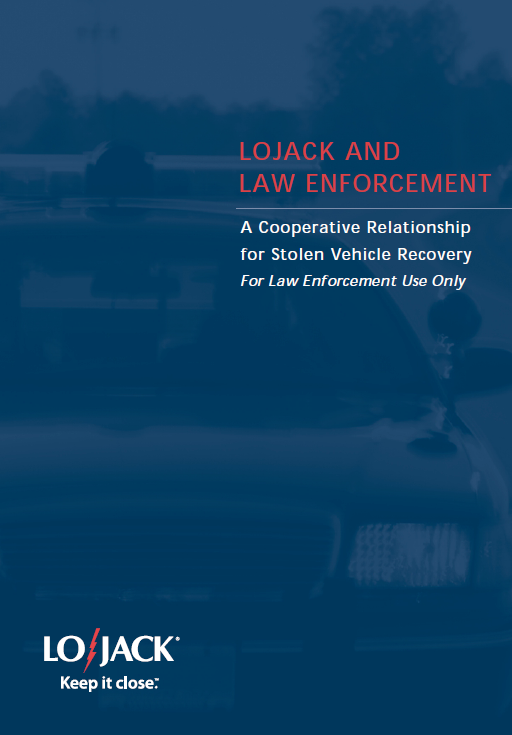 The following primer on LoJack stolen vehicle recovery systems is written for law enforcement officers who communicate with the media. It’s designed to factually explain the various components of the LoJack Stolen Vehicle Recovery System and how it is used by officers to track and recover vehicles that have been reported stolen by their owners. If you have additional questions on LoJack, please contact your local LoJack Law Enforcement Liaison or LoJack Corporate Communications.

WHO IS LOJACK CORPORATION?

Headquartered in Westwood, Mass., LoJack (Nasdaq: LOJN) is the recognized
world leader in stolen vehicle tracking and recovery. Our proven radio
frequency based system – the most successful tracking technology available
today – is used by federal, state, and local law enforcement agencies
throughout the United States and more than 20 countries worldwide.
With a vehicle recovery rate of more than 90 percent, LoJack is the trusted
stolen vehicle recovery solution with more than 3 million units installed
worldwide. Law enforcement officials using LoJack are responsible for the
recovery of more than 100,000 vehicles worldwide worth nearly $2 billion
and the discovery and breakup of hundreds of “chop shops” and organized
theft rings.

WHAT ARE LOJACK’S PRODUCTS?

There are two LoJack recovery systems for consumers:

• LoJack Stolen Vehicle Recovery System – This consists of a small,
silent transmitter hidden within the consumer’s vehicle. After police enter
a stolen vehicle report in the state crime computer, the LoJack transmitter
is activated and begins to send a signal that police can track using LoJack
Police Tracking Computers to recover the stolen vehicle.

In addition to these stolen vehicle recovery systems, LoJack markets a portfolio
of complementary automotive security products. LoJack also markets a Stolen
Vehicle Recovery System that is designed for the construction industry.

• The LoJack Transmitter – A LoJack customer purchases this small
transmitter device for his vehicle.

Hidden – This device is installed in any of dozens of hidden locations
within a consumer’s vehicle. There are no decals, aerials, or other
indications that it is present in the vehicle.

Powered – The LoJack is connected to the car’s electrical system and can
also transmit for several days using its own self-contained backup battery.

• LoJack Database – When a state crime computer receives notification
of a stolen vehicle, it connects to a LoJack database to determine if the
stolen vehicle is equipped with a LoJack transmitter. If so, that LoJack
transmitter is activated.

• LoJack Radio Towers – LoJack operates a network of radio towers that
communicate with and activate the LoJack transmitter hidden within
the stolen vehicle.

This automotive security system builds on the technology of the LoJack Stolen
Vehicle Recovery System. LoJack Early Warning notifies the owner if his
vehicle has been moved without his permission, enabling him to be aware of a
possible vehicle theft much sooner. LoJack Early Warning dramatically reduces
the time between theft discovery and vehicle recovery, which can significantly
minimize vehicle damages and repair costs. The system components are:

LoJack Stolen Vehicle Recovery System – The same LoJack
transmitter is used in the LoJack Early Warning Recovery System.
• Early Warning Motion Sensor – This hidden, unmarked sensor detects
when the protected vehicle has been moved.
• Two Early Warning Key Passes – The presence of the key pass indicates
an authorized user is driving the vehicle. If a key pass is not present when
the motion sensor detects vehicle movement (indicating an unauthorized
movement), the consumer is notified that the vehicle has moved.

Consumers can receive notification in their preferred priority through five
forms: home, work and/or cell phone, alpha pager, e-mail, and text messaging.
Once notified, the consumer can verify whether the vehicle has been stolen
and report the theft to police sooner.

Occasionally, some confusion arises regarding the LoJack radio frequency
and its permitted uses.

• LoJack technology operates on a specific radio frequency explicitly allocated
by the U.S. Federal Communications Commission and limited to use by
law enforcement agencies solely and exclusively for stolen vehicle recovery.

LoJack operates in areas of the country with the greatest population and
density, highest number of new vehicle sales, and highest incidence of
vehicle theft. LoJack operates in all or part of the following states:
On a global scale, LoJack systems are in use in more than 20 countries
throughout Latin America, Europe, Africa, Asia, and the Western Hemisphere.