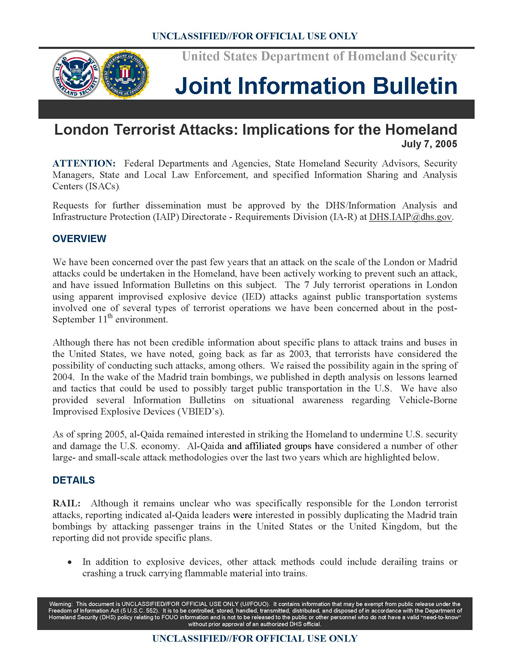 Requests for further dissemination must be approved by the DHS/Information Analysis and Infrastructure Protection (IAIP) Directorate – Requirements Division (IA-R) at DHS.IAIP@dhs.gov.

We have been concerned over the past few years that an attack on the scale of the London or Madrid attacks could be undertaken in the Homeland, have been actively working to prevent such an attack, and have issued Information Bulletins on this subject. The 7 July terrorist operations in London using apparent improvised explosive device (IED) attacks against public transportation systems involved one of several types of terrorist operations we have been concerned about in the post-September 11th environment.

Although there has not been credible information about specific plans to attack trains and buses in the United States, we have noted, going back as far as 2003, that terrorists have considered the possibility of conducting such attacks, among others. We raised the possibility again in the spring of 2004. In the wake of the Madrid train bombings, we published in depth analysis on lessons learned and tactics that could be used to possibly target public transportation in the U.S. We have also provided several Information Bulletins on situational awareness regarding Vehicle-Borne Improvised Explosive Devices (VBIED’s).
As of spring 2005, al-Qaida remained interested in striking the Homeland to undermine U.S. security and damage the U.S. economy. Al-Qaida and affiliated groups have considered a number of other large- and small-scale attack methodologies over the last two years which are highlighted below.

RAIL: Although it remains unclear who was specifically responsible for the London terrorist attacks, reporting indicated al-Qaida leaders were interested in possibly duplicating the Madrid train bombings by attacking passenger trains in the United States or the United Kingdom, but the reporting did not provide specific plans.

• In addition to explosive devices, other attack methods could include derailing trains or crashing a truck carrying flammable material into trains.

• Al-Qaida is interested in sending unidentified potential operatives to pilot schools, specifically pilot schools not falling under the scrutiny of the U.S. government.
• Al-Qaida has a continued interest in seizure of aircraft as an attack method.
• Al-Qaida may seek to involve an increased number of operatives in aviation-focused operations to overcome increased flight security or the resistance of passengers or crew members.
• Al-Qaida may pursue various methods of concealing explosives as seemingly innocuous items that are typically authorized to be carried onboard aircraft.

BUILDINGS: We believe al-Qaida may consider using natural gas as an explosive to destroy high-rise buildings. However, the technical feasibility of such attack methodology is questionable. Primary effect of this type of attack would be a thermal impact, not structural.

• One possible attack method involves renting several rooms in a targeted building and then filling the rooms with natural gas, with a timer and detonator placed on the ceiling of a room to detonate the gas.
• A related possible attack method would be to secure rooms that are higher up in targeted buildings in order to prevent firefighters from having easier access to a targeted blast site.

• Al-Qaida could consider using a tanker loaded with flammable material to disrupt traffic, destroy infrastructure, or to attack a location or building. Impact using this method would produce a thermal fireball and detonation would be minimal.

DHS and FBI encourage recipients of this document to report information concerning suspicious or criminal activity to the local FBI Joint Terrorism Task Force (JTTF) – the FBI regional phone numbers can be found online at http://www.fbi.gov/contact/fo/fo.htm – For transportation suspicious incidents and threat reporting contact the Transportation Security Operations Center (TSOC) at 703-563-3236/3237 and email M&L.TSOC@tsa.dot.gov. For information affecting the private sector and critical infrastructure, contact the National Infrastructure Coordinating Center (NICC), a sub-element of the HSOC. The NICC can be reached via telephone at 202-282-9201 or via email at NICC@dhs.gov. When available, each report submitted should include the date, time, location, type of activity, number of people and type of equipment used for the activity, the name of the submitting company or organization, and a designated point of contact (POC).

For comments or questions related to the content or dissemination of this document, please contact the DHS/IAIP, IA-R – Information Management staff at DHS.IAIP@dhs.gov.