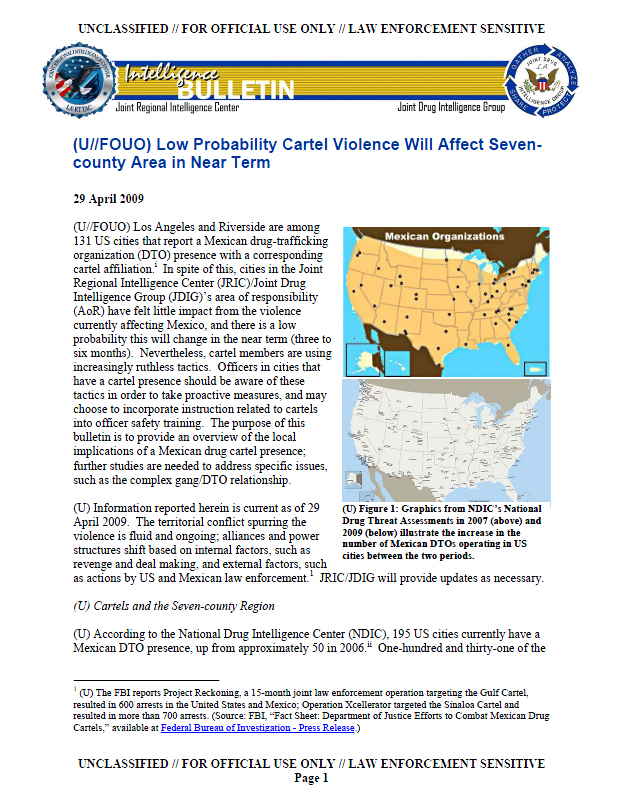 (U//FOUO) Los Angeles and Riverside are among 131 U.S. cities that report a Mexican drug-trafficking organization (DTO) presence with a corresponding cartel affiliation. In spite of this, cities in the Joint Regional Intelligence Center (JRIC)/Joint Drug Intelligence Group (JDIG)’s area of responsibility (AoR) have felt little impact from the violence currently affecting Mexico. and there is a low probability this will change in the near term (three to six months). Nevertheless, cartel members are using increasingly ruthless tactics. Officers in cities that have a cartel presence should be aware of these tactics in order to take proactive measures. and may choose to incorporate instruction related to cartels into officer safety training. The purpose of this bulletin is to provide an overview of the local implications of a Mexican drug cartel presence: further studies are needed to address specific issues. such as the complex gang DTO relationship.

(U) Cartels and the Seven-county Region

(U) According to the National Drug Intelligence center (NDIC). 195 Us cities currently have a Mexican DTO presence, up from approximately 50 in 2006. One-hundred and thirty-one of the 195 have a corresponding Mexican drug cartel affiliation. The NDIC reports niembers of the Federation and Tijuana cartels operate in the Los Angeles area. while members of lhe Federation Cartel also operate in Riverside, LA

(U) Although cartel-related crime on the tS side of the torder remains relatively limited. there has been sporadie violence attributed to the groups. including murders in Binuingham. Alabama. and Atlanta. Georgia. An El Paso Police Department spokesperson announced his department had credible reports that cartel leaders had authodized assassinations in the United states.

(U) Cartel-related murders remain relatively isolated incidents: however. kidnappings are trending upward. Phoenix. Arizona has been hit particularly hard. and Atlanta reports a significant increase. Not all of the crimes are cartel-related. but the majority involve drug trafficking and human smuggling operations. 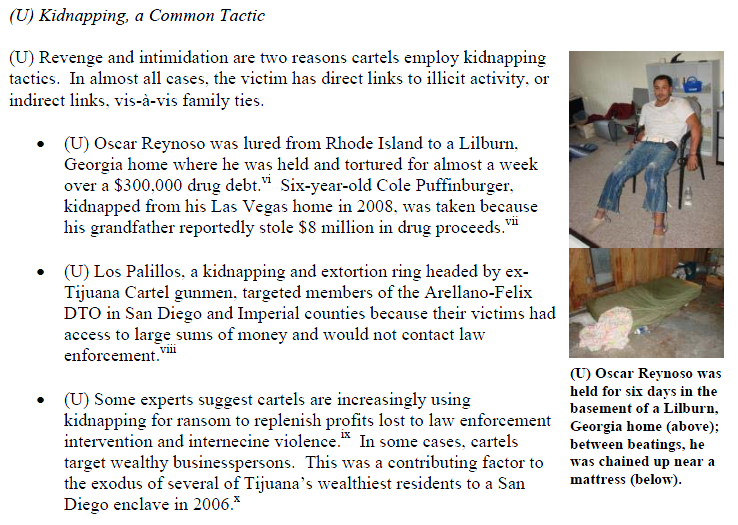 (U) Cartel Members Unlikely to Target US Law Enforcement

(t) The DEA reports there is no indication in the near temi that cartels will deliberately target US government personnel or civilians. or Us interests. Some theorize this might be partly due to the perceived US response and subsequent disruption to cartel operations. Nevertheless, isolated reports exist. For example, circa June 2oo8, Immigrations and Customs Enforcement officials reportedly gave authorities in New Mexico and Texas a cartel “hit list” that contained the names of 15-20 people living in the two states.

(U//FOUO//LES)) Until recently, Los Zetas worked as enforcers for the Gulf Cartel. Current reports in the Mexican press are the Zetas have split from the organization and formed a cartel of heir own, or are now contracting out to a variety of DTO’s.  New reports also suggest a potentially dangerous trend: Zetas have been ordered to protect and maintain control of their drug loads even if confronted by US law enforcment. They have allegedly prepared for such confrontations by using paintball guns. To date there has been little evidence of a Zetas presence in the JRIC JDIG AoR. Most reports indicate that the group continues to focus on the Texas area and points east territory primed through its Gulf Cartel roots.