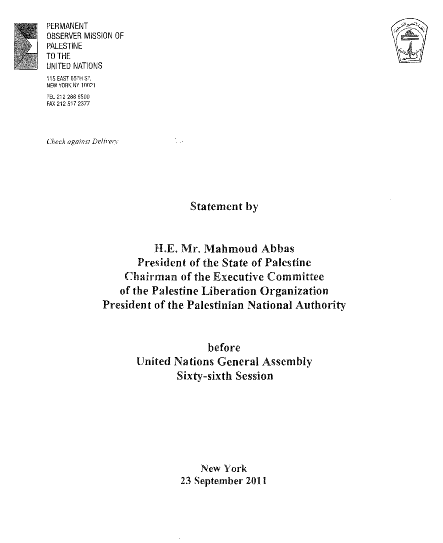 A year ago, at this same time, distinguished leaders in this hall addressed the stalled peace efforts in our region. Everyone had high hopes for a new round of final status negotiations, which had begun in early September in Washington under the direct auspices of President Barack Obama and with participation of the Quartet, and with Egyptian and Jordanian participation, to reach a peace agreement within one year. We entered those negotiations with open hearts and attentive ears and sincere intentions, and we were ready with our documents, papers and proposals. But the negotiations broke down just weeks after their launch.

After this, we did not give up and did not cease our efforts for initiatives and contacts. Over the past year we did not leave a door to be knocked or channel to be tested or path to be taken and we did not ignore any formal or informal party of influence and stature to be addressed. We positively considered the various ideas and proposals and initiatives presented from many countries and parties. But all of these sincere efforts and endeavors undertaken by international parties were repeatedly wrecked by the positions of the Israeli government, which quickly dashed the hopes raised by the launch of negotiations last September.

The core issue here is that the Israeli government refuses to commit to terms of reference for the negotiations that are based on international law and United Nations resolutions, and that it frantically continues to intensify building of settlements on the territory of the State of Palestine. Settlement activities embody the core of the policy of colonial military occupation of the land of the Palestinian people and all of the brutality of aggression and racial discrimination against our people that this policy entails. This policy, which constitutes a breach of international humanitarian law and United Nations resolutions, is the primary cause for the failure of the peace process, the collapse of dozens of opportunities, and the burial of the great hopes that arose from the signing of the Declaration of Principles in 1993 between the Palestine
Liberation Organization and Israel to achieve a just peace that would begin a new era for our region.

The reports of United Nations missions as well as by several Israeli institutions and civil societies convey a horrific picture about the size of the settlement campaign, which the Israeli government does not hesitate to boast about and which it continues to execute through the systematic confiscation of the Palestinian lands and the construction of thousands of new settlement units in various areas of the West Bank, particularly in East Jerusalem, and accelerated construction of the annexation Wall that is eating up large tracts of our land, dividing it into separate and isolated islands and cantons, destroying family life and communities and the livelihoods of tens of thousands of families. The occupying Power also continues to refuse permits for our people to build in Occupied East Jerusalem, at the same time that it intensifies its decades-long campaign of demolition and confiscation of homes, displacing Palestinian owners and residents under a multi-pronged policy of ethnic cleansing aimed at pushing them away from their ancestral homeland. In addition, orders have been issued to deport elected representatives from the city of Jerusalem. The occupying Power also continues to undertake excavations that threaten our holy places, and its military checkpoints prevent our citizens from getting access to their mosques and churches, and it continues to besiege the Holy City with a ring of settlements imposed to separate the Holy City from the rest of the Palestinian cities.

The occupation is racing against time to redraw the borders on our land according to what it wants and to impose a fait accompli on the ground that changes the realities and that is undermining the realistic potential for the existence of the State of Palestine.

At the same time, the occupying Power continues to impose its blockade on the Gaza Strip and to target Palestinian civilians by assassinations, air strikes and artillery shelling, persisting with its war of aggression of three years ago on Gaza, which resulted in massive destruction of homes, schools, hospitals, and mosques, and the thousands of martyrs and wounded.

The occupying Power also continues its incursions in areas of the Palestinian National Authority through raids, arrests and killings at the checkpoints. In recent years, the criminal actions of armed settler militias, who enjoy the special protection of the occupation army, has intensified with the perpetration of frequent attacks against our people, targeting their homes, schools, universities, mosques, fields, crops and trees. Despite our repeated warnings, the occupying Power has not acted to curb these attacks and we hold them fully responsible for the crimes of the settlers.

These are just a few examples of the policy of the Israeli colonial settlement occupation, and this policy is responsible for the continued failure of the successive international attempts to salvage the peace process.

This policy will destroy the chances of achieving a two-State solution upon which there is an international consensus, and here I caution aloud: This settlement policy threatens to also undermine the structure of the Palestinian National Authority and even end its existence. In addition, we now face the imposition new conditions not previously raised, conditions that will transform the raging conflict in our inflamed region into a religious conflict and a threat to the future of a million and a half Christian and Muslim Palestinians, citizens of Israel, a matter which we reject and which is impossible for us to accept being dragged into.

All of these actions taken by Israel in our country are unilateral actions and are not based on any earlier agreements. Indeed, what we witness is a selective application of the agreements aimed at perpetuating the occupation. Israel reoccupied the cities of the West Bank by a unilateral action, and reestablished the civil and military occupation by a unilateral action, and it is the one that determines whether or not a Palestinian citizen has the right to reside in any part of the Palestinian Territory. And it is confiscating our land and our water and obstructing our movement as well as the movement of goods. And it is the one obstructing our whole destiny. All of this is unilateral.

It is no longer possible to redress the issue of the blockage of the horizon of the peace talks with the same means and methods that have been repeatedly tried and proven unsuccessful over the past years. The crisis is far too deep to be neglected, and what is more dangerous are attempts to simply circumvent it or postpone its explosion.

It is neither possible, nor practical, nor acceptable to return to conducting business as usual, as if everything is fine. It is futile to go into negotiations without clear parameters and in the absence of credibility and a specific timetable. Negotiations will be meaningless as long as the occupation army on the ground continues to entrench its occupation, instead of rolling it back, and continues to change the demography of our country in order to create a new basis on which to alter the borders.