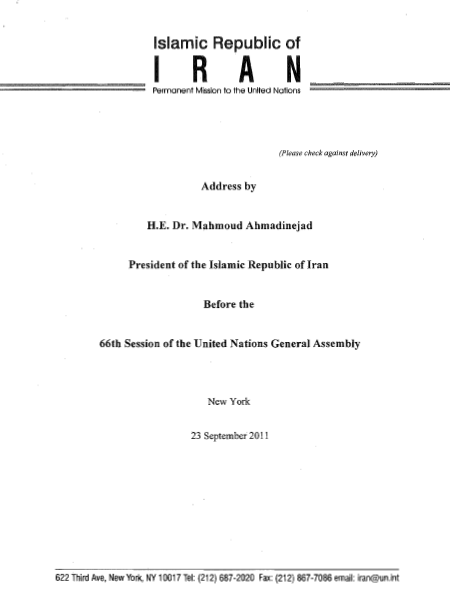 Address by H.E. Dr. Mahmoud Ahmadinejad President of the Islamic Repu blic of Iran Before the 66th Session of the United Nations General Assembly

It is vividly clear that despite all historical achievements, including creation of the United-Nations, which was a product of untiring struggles and efforts offree-minded and justice-seeking individuals as well as the international cooperation, human societies are yet far from fulfilling their noble desires and aspirations;

Most nations of the world are unhappy with the current international circumstances;

And despite the general longing and aspiration to promote peace, progress, and fraternity, wars, mass-murder, widespread poverty, and socioeconomic and political crises continue to infringe upon the rights and sovereignty of nations, leaving behind irreparable damage worldwide;

Approximately, three billion people of the world live on less than 2.5 dollars a day, and over a billion people live without having even one sufficient meal on a daily basis;

More than twenty thousand innocent and destitute children die every day in the world because of poverty.

What are the causes and reasons behind these inequalities? How can bone remedy such injustice?

The rulers of the global management circles divide the social life from ethics and spirituality while claiming the situation is the outcome of the pursuit of thepath of divine prophets or the vulnerability of nations or the ill performance of a few groups or individuals. They claim that only their views and approaches can save the human society.

Wouldn’t you think that the root cause of the problems must be sought in the prevailing international order, or the way the world is governed? I would like to draw your kind attention to the following questions:

Who abducted forcefully tens of millions of people from their homes in Africa and other regions of the world during the dark period of slavery , making them a victim of their materialistic greed.

Who imposed colonialism for over four centuries upon this world. Who occupied lands and massively plundered resources of other nations, destroyed talents, and alienated languages, cultures and identities of nations?

Who triggered the first and second world wars, that left seventy millions killedand hundreds of millions injured or homeless. Who created the wars in Korean peninsula and in Vietnam?

Who imposed, through deceits and hypocrisy, the Zionism and over sixty years of war, homelessness, terror and mass murder on the Palestinian people and on countries of the region?

Who imposed and supported for decades military dictatorship and totalitarian regimes on Asian, African, and Latin American nations.

Who used nuclear bomb against defenseless people, and stockpiled thousands of warheads in their arsenals?

Whose economies rely on waging wars and selling arms?

Who provoked and encouraged Saddam Hussein to invade and impose an eight-year war on Iran, and who assisted and equipped him to deploy chemical weapons against our cities and our people.

Who used the mysterious September 11 incident as a pretext to attack Afghanistan and Iraq, killing, injuring, and displacing millions in two countries with the ultimate goal of bringing into its domination the Middle East and its oil resources?

Who nullified the Breton Woods system by printing trillions of dollars without the backing of gold reserves or equivalent currency? A move that triggered inflation worldwide and was intended to prey on the economic gains of other nations.

Which country’s military spending exceeds annually a thousand billion dollars, more than the military budgets of all countries of the world combined?

Which governments are the most indebted ones in the world?

Who dominates the policy-making establishments of the world economy?

Who are responsible for the world economic recession, and are imposing the consequences on America, Europe and the world in general?

Which governments are always ready to drop thousands of bombs on other countries, but ponder and hesitate to provide aid to famine-stricken people in
Somalia or in other places?

Who are the ones dominating the Security Council which is ostensibly responsible for safeguarding the international security?

There exist tens of other similar questions. Of course, the answers are clear. The majority of nations and governments of the world have had no role in the creation of the current global crises, and as a matter of fact, they were themselves the victims of such policies.

It is as lucid as daylight that the same slave masters and colonial powers that once instigated the two world wars have caused widespread misery and disorder with far-reaching effects across the globe since then.

All cultures, identities, lives, values and wealth of nations, women, youth, families as well as the wealth of nations are sacrificed to their imperialistic tendencies and their inclination to enslave and captivate others. Hypocrisy and deceit are allowed in order to secure their interests and imperialistic goals. Drug- trafficking and killing of innocent human beings are also allowed in pursuit of such diabolic goals. Despite NATO’s presence in theoccupied Afghanistan, there has been a dramatic increase in the production of illicit drugs there.

They tolerate no question or criticism, and instead of presenting a reason for their violations, they always put themselves in the position of a claimant.By using their imperialistic media network which is under the influence of colonialism they threaten anyone who questions the Holocaust and the September 11 event with sanctions and military action.

Last year, when the need to form a fact-finding team to undertake a thorough investigation concerning the hidden elements involved in September 11 incident was brought up; an idea also endorsed by all independent governments and nations as well as by the majority in the United States, my country and myself came under pressure and threat by the government of the United States.

Instead of assigning a fact-finding team, they killed the main perpetrator and threw his body into the sea.