Maryland Coordination and Analysis Center: Stages of an Active Shooter 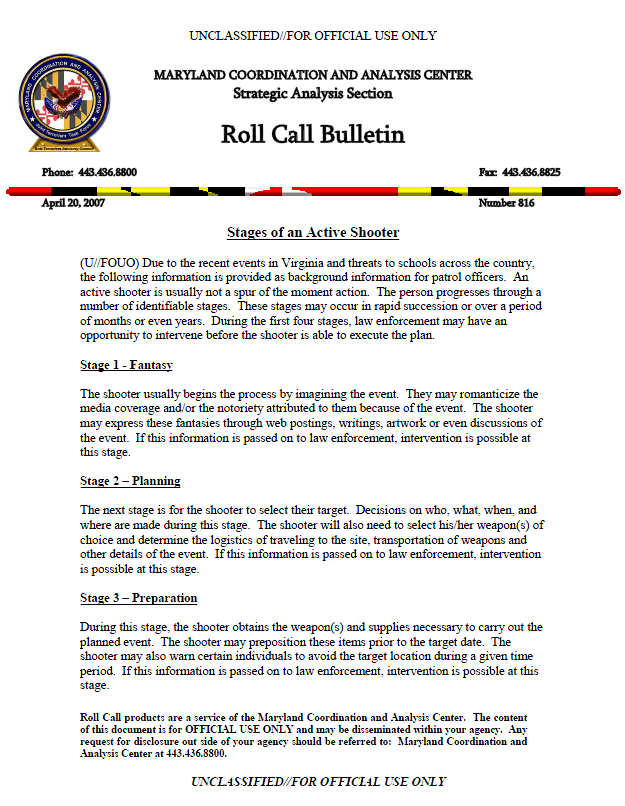 Stages of an Active Shooter

(U//FOUO) Due to the recent events in Virginia and threats to schools across the country, the following information is provided as background information for patrol officers. An active shooter is usually not a spur of the moment action. The person progresses through a number of identifiable stages. These stages may occur in rapid succession or over a period of months or even years. During the first four stages, law enforcement may have an
opportunity to intervene before the shooter is able to execute the plan.

The shooter usually begins the process by imagining the event. They may romanticize the
media coverage and/or the notoriety attributed to them because of the event. The shooter
may express these fantasies through web postings, writings, artwork or even discussions of
the event. If this information is passed on to law enforcement, intervention is possible at
this stage.

The next stage is for the shooter to select their target. Decisions on who, what, when, and
where are made during this stage. The shooter will also need to select his/her weapon(s) of
choice and determine the logistics of traveling to the site, transportation of weapons and
other details of the event. If this information is passed on to law enforcement, intervention
is possible at this stage.

During this stage, the shooter obtains the weapon(s) and supplies necessary to carry out the
planned event. The shooter may preposition these items prior to the target date. The
shooter may also warn certain individuals to avoid the target location during a given time
period. If this information is passed on to law enforcement, intervention is possible at this
stage.

Stage 4 – Approach
At this point, the shooter has developed a plan, obtained the necessary weapons and
supplies and is acting on the plans. The shooter is traveling to the target location and, most
likely, will be armed with his weapons of choice. Patrol officers may encounter the shooter
through a traffic stop, a “Terry Stop,” or a citizen complaint. Contact with the shooter at
this point is very dangerous. However, if approached in a tactically sound manner, the
officer may be able to stop the shooter before anyone is harmed.

The shooter is executing the plan. Because he is highly focused on his targets, the shooter
will not stop until he/she runs out of ammunition or victims, or he/she takes their own life.
Responding officers should rely on their training and take immediate appropriate action.
Active shooter events occur across the country in many different locations including
schools, shopping malls, businesses, streets, and other public venues. Review your
agency’s policies and procedures for addressing active shooter scenarios. Familiarize
yourself with possibly targets on your post and all possible approach routes, building
layouts, security features, etc. Prior knowledge of the locations will work to your
advantage in a crisis.