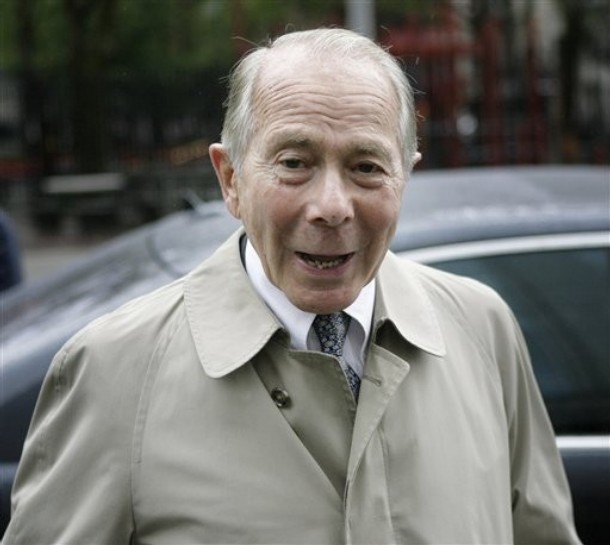 Maurice Raymond “Hank” Greenberg was born May 4, 1925 in New York City, the son of a Jewish candy store owner Jacob Greenberg.  His father died when he was seven and his mother, Ada Rheingold, married a dairy farmer who lived in the Catskill mountains.  Greenberg lied about his age in 1942, claiming he was seventeen, so that he could enlist in the Army.  He later became an Army Ranger, landing on Omaha Beach on D-Day and participating in the liberation of Dachau in 1945.  After the war, Mr. Greenberg received his undergraduate degree from the University of Miami Florida in 1948 and earned his L.L.B. from New York Law School in 1950.3  He was admitted to the bar in 1952.4  He went on to serve during the Korean conflict, taking a position in the Judge Advocate General’s Corps.

In 1953, Mr. Greenberg talked his way into a position at the offices of Continental Casualty in Manhattan.  In 1959, he was appointed vice-president, becoming the youngest executive in the company’s history.  In 1960, J. Milburn Smith, the president of Chicago-based Continental Casualty Co., recommended Greenberg to Cornelius Vander Starr, founder of C.V. Starr & Co.   Starr was a former/current intelligence operative with the Office of Strategic Services (OSS), the precursor to the modern Central Intelligence Agency, who had run a succesful insurance company in Hong Kong and was utilized tapped by American intelligence officials to operate covert networks in China prior to the Communist Revolution.5

Towards the end of Mr. Starr’s life, he took a particular dislike of Mr. Greenberg.  A memo circulated to C.V. Starr shareholders in 1968 said:

Another sign of the effect of Mr. Starr’s illness on him has been his tendency lately to criticise severely or attack almost everybody with whom he works. In recent months, he has criticized Greenberg for being
greedy, rough and Jewish; Manton for being stupid; Ahlers for being narrow, bad with people and endangering the UBank in illiquid Latin American investments; Tweedy for being weak and run by Mrs.
Tweedy; Roberts as being inadequate to run AIUO worldwide, hence he should share it with Buck Freeman; Freeman for not knowing the business; Stempel for being merely a caretaker and one who could not run and should not run AIRCO; even K.K. he says is no good in recruiting and training people or building replacements. . . . I would hate to hear what he says about “yours truly.”6 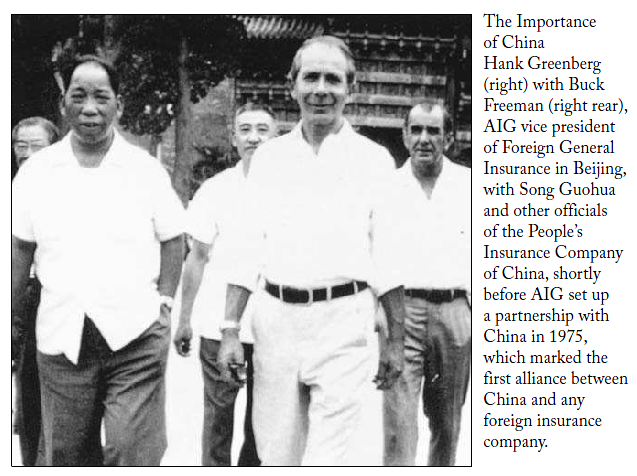 During his tenure as CEO of AIG, Mr. Greenberg greatly expanded the company’s offshore reach, by overseeing the creation of hundreds of shell companies in offshore jurisdcitions.

One of the heated criticisms people have made about AIG for many years, and especially since the company confronted its accounting and related crises, is that it is too complicated.When Starr was alive there were fewer than 100 companies, many offshore. By the time Greenberg resigned, there were hundreds of companies, again many offshore. Some would argue it is not only complex, but impenetrable to an outsider, and especially to insurance regulators. That has its advantages. Good for dealing with regulators, bad for investors, especially in this age of transparency. Yet to someone familiar with the corporation, the maze really is not so complicated, and Starr clearly was not trying to make it more complicated, especially since the regulatory issues of the 1940s were not what they are today. The overriding issue is that because so many of the companies are incorporated and domiciled offshore, it makes regulators suspicious, and it is true that the elaborate corporate organization chart could provide the means for chicanery.7

In 2004, New York Attorney General Eliot Spitzer brought bid rigging charges against Marsh & McLennan and several insurance companies, including AIG.  At the time of the alleged rigging, the CEO of Marsh & McLennan was Jeffrey W. Greenberg, son of Maurice Greenberg. 8

In 2003 and 2004, AIG became embroiled in a series of fraud investigations conducted by the Securities and Exchange Commission, U.S. Justice Department, and New York State Attorney General’s Office.  One of the cases, involving PNC Financial Services, involved utilizing AIG’s Financial Products Division to create “special purpose vehicles” for moving $762 million into off-balance-sheet entities to improve the companies fiscal appearance. According to Fortune magazine, the board of AIG was particularly bothered by Mr. Greenberg’s “pushing around” regulators during the settlement process.  A group of individuals, including Council on Foreign Relations co-chair Carla Hills and Henry Kissinger, reportedly appealed to the board to not force Mr. Greenberg to leave amid the growing scandals.  On March 13, 2005 Greenberg was reportedly asked to resign in a meeting of AIG’s directors which he attended via periodic phone calls from his yacht, the Serendipity II, off the coast of Florida.9  On March 23, 2005 a team sent by Mr. Greenberg’s lawyer used an employee passkey to access the empty office of AIG’s Bermuda operations and removed 80 boxes of documents.

A Christian Science Monitor report in 2005 summarized the case:

American International Group (AIG) – which is part of the Dow Jones Industrial Average – which has now admitted to $1.7 billion in improper accounting. And, it has enveloped some legends in the financial arena: Maurice “Hank” Greenberg, forced out as chairman of AIG, and Warren Buffet, the Omaha stock market guru, who will be questioned about his possible involvement.

Because AIG is so massive and important to the financial world, regulators will have to tread carefully. The company’s main business is providing reinsurance, that is, it insures insurance companies. This helps the industry to spread its risk among many large and financially sound companies so a single event does not become a financial disaster for one company.

Also, because of AIG’s huge size, lawyers don’t think the government will bring a criminal charge against the company as it did for Arthur Andersen, Enron’s accountant. The criminal charge was a death sentence for the accountant.

“There is an increased reluctance to bring criminal charges that ultimately have the effect of killing a company that otherwise employs a lot of innocent people and has lots of value to it,” says Michael Gass, an expert on SEC enforcement at Palmer & Dodge, a Boston law firm. “Instead, there is an increased focus on the individuals responsible.”

The investigation is likely to also expand overseas. AIG has operations offshore, particularly in Bermuda where it has used a company to provide financial rewards for its executives. “It’s common for insurance companies to use offshore companies and not be public about it,” says Gass. “There is nothing illegal about it unless there is misuse.”

So far, it’s expected Mr. Buffet will be questioned as a possible witness, not necessarily a target. Buffet is chairman of a company called Berkshire Hathaway, which owns a company called General Re, which provides reinsurance. It agreed to a $500 million AIG deal that is now under scrutiny. Investigators are now trying to determine what Buffet knew and when he knew it.

“With the icon of integrity and master of morality even mentioned with AIG causes some people to ask, ‘Is everyone now suspect?'” asks Sam Stovall, chief investment strategist at Standard & Poor’s in New York.

The scandal links two of the world’s richest men. According to Forbes Magazine, Buffet is the world’s second-richest person with assets of $41 billion. Greenberg is ranked 132 in the world and 59th in the US with assets of $3.1 billion. Recently, two of Greenberg’s sons, both executives in the insurance business, have also been tarnished by scandal.10

Former AIG employee Ronald Shelp’s 2006 book on Mr. Greenberg, called Fallen Giant: The Amazing Story of Hank Greenberg and the History of AIG, includes the following description of AIG’s accounting problems in regard to the Spitzer lawsuit:

First, there was the overarching accusation that from the 1980s (if not earlier) until Greenberg’s departure from AIG in 2005, the defendants routinely engaged in misleading accounting and financial reporting. Thisreporting gave an unduly positive picture of AIG’s underwriting performance for the investing public. Specifically, it:

• Engaged in two sham insurance transactions to give the investing public the impression that AIG had a larger cushion of reserves to pay claims than it actually did—transactions that Greenberg personally proposed and negotiated in phone calls with the then CEO of General Reinsurance Corporation.

As a result, there were investment losses rather than the more embarrassing underwriting losses.

The suit discusses Greenberg’s active involvement in monitoring the price of AIG stock and in urging the AIG traders to buy the stock. But it makes no specific charges.

The book goes on to describe how during the 198os, under Mr. Greenberg’s guidance and personal involvement, a series of offshore entities for the purposes of “reinsuring” itself and its own subsidiaries.  The Spitzer lawsuit charged is that AIG repeatedly misled regulators about the nature of it relationship with these entities.

In April 2005, Spitzer defended the case on This Week with George Stephanopoulos on ABC, saying that:

“The evidence is overwhelming that these were transactions created for the purpose of deceiving the market.  We call that fraud.  It is deceptive.  It is wrong.  It is illegal . . . AIG is a black box, run with an iron fist by a CEO who did not tell the public the truth.”12

SICO is controlled by Maurice ‘Hank’ Greenberg, who led AIG for nearly four decades before being forced out during an accounting scandal in 2005. AIG claims that after leaving AIG, Greenberg engineered a takeover of SICO, which had been controlled by AIG during Greenberg’s tenure, and violated SICO’s fiduciary responsibility for what AIG claims was a trust primarily designed to fund executive compensation plans. AIG claims Starr converted the stock held in the trust, valued at one time at as much as $20 billion, for its own use.15

In addition to having worked for 37 years as the head of AIG, a firm which was founded by a U.S. intelligence operative and is rumored to be an underwriter of CIA facilities around the world,16 Mr. Greenberg is also connected to the U.S. intelligence community in many other ways.

Following his business trips to China in the 1980s,  Mr. Greenberg is said to have been debriefed by the CIA. 17  Greenberg’s level of familiarity with CIA officials is described as being unique:

A real asset in advancing AIG interests abroad was Hank Greenberg himself. His contacts around the world are legendary and are sorely missed by the new AIG management team. Whenever he went to the
Philippines in the 1970s and early 1980s, he dined with President Marcos and then was debriefed by the CIA, part of the continuing symbiotic relationship with the intelligence community that started with Starr and continued with Youngman, Tweedy, Greenberg, and others. The New York Times magazine once ran an interview with CIA Director Bill Casey in which he commented on the few individuals outside government he tapped most often for advice. One was former Nevada Senator Paul Laxalt. Another was Hank Greenberg, who, needless to say, was absolutely furious over the article. “How in the hell,” he asked me, “can you possibly conduct covert operations when you end up in the New York Times?”

In 1996, Mr. Greenberg participated in a a task force organized by the Council on Foreign Relations on intelligence reform.  The task force produced a report “Making Intelligence Smarter: The Future of U.S. Intelligence” which is cited in official CIA histories.18

In 2005, the Christian Science Monitor reported that Greenberg is well-known in Washington where he known for raising large amounts of money. Greenberg was one of the President Bush’s ‘Rangers’ which means he personally raked in more than $200,000 for the reelection campaign. At the same time, he is also known for his access to members of the cabinet and Congress. This access has paid-off as the administration has often supported Greenberg on a number of issues ranging from access to China to terrorism insurance.19