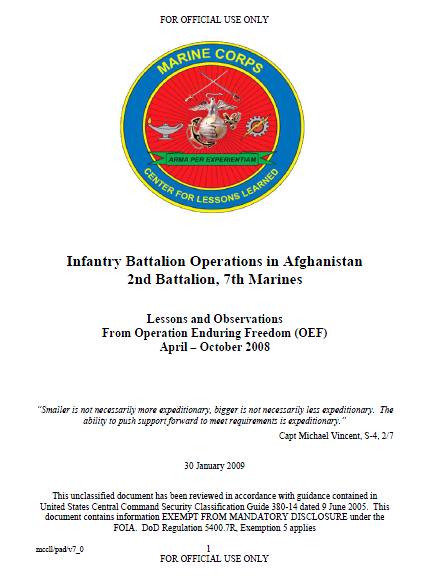 The 2nd Battalion, 7th Marines (Task Force 2/7) deployed to southern Afghanistan from April to October 2008, on short notice in order to fill a critical request for forces in support of U.S. Central Command.

Bottom Line Up Front: The mission of training and mentoring Afghani police was complicated by (1) the need to establish and occupy nine forward operating bases (FOBs) spread over an area of approximately 28,700 square kilometers, while (2) simultaneously maintaining a level of security that (3) permitted identification of suitable candidates for police and training them, since a police force did not exist yet in the areas in which 2/7 operated and (4) accomplishing this without any established support network. The operational environment was more kinetic and austere than conditions generally experienced by recent veterans of Operation Iraqi Freedom (OIF). Companies and platoons were widely dispersed and follow-on units deploying to such areas in Afghanistan must be prepared to operate in a semi-autonomous manner. Training and organization need to be tailored to those conditions and their specific area of operations (AO), and consideration should be given to the proven utility of the MAGTF in such an environment. Battalion operations were viewed as effective in establishing a foundation for follow-on units in the following areas: FOB construction, logistics processes, communications infrastructure, initiation of civil military operations, a mentoring and training process, and disrupting insurgent control of areas previously unoccupied by coalition forces.

Police mentoring and training efforts were hampered by ongoing anti-coalition activities. “It’s like doing Fallujah before Al Fajr. We’re in the midst of it and trying to fight Taliban while doing civil-military operations (CMO) and while trying to train police and mentor them, because they’re learning as they go. You’re doing everything concurrently. The mantra is ‘clear, hold, build.’ We’re trying to do it all at the same time. …We should be clearing. … certainly to a point of creating a stable, more secured, environment. When you bring in a police force, that’s the building piece. When you’re doing CMO, that’s building, but you’ve got to hold your ground. We don’t really hold much ground outside of our FOB. We go out there and influence it. We disrupt, but we don’t hold it. And the reason we don’t hold it is because we haven’t cleared it, and by providing that security buffer through clearing and then establishing the security footprint to hold it, you’re more able to effectively build. However, during that transition piece, you’re going to get the willing assistance of the people themselves. … I use the term, ‘turning four into forty’, and a four-man fire team now become 40 local citizens in addition to them, that’s now enabling security and taking an interest in their own prosperity.”

The command relationship for 2/7 was in line with their mentoring mission, which placed them under Afghan Regional Security Integration Command (ARSIC) who is under TF Phoenix which reported to CSTC-A, who in turn reported to CENTCOM. This command structure was outside International Security and Assistance Force (ISAF) control. Most of the warfighting capabilities in Afghanistan resided with ISAF, which reported to NATO. The CSTC-A command relationship had significant consequences for 2/7 and impacted on their operations and logistics. “ISAF has the ability to source equipment. ISAF has the priority for all the capabilities whether it is air support, air assets in particular, ISR assets; they are the operational arm. CSTCA is … a train and mentor organization and there is a mindset – because of how they’ve operated in the last few years – that CSTCA will go to established FOBs. They will benefit from the battle space manager’s generosity to host them at their FOBs and then they will take the mission of training that Army and police force. That hasn’t been 2/7’s experience. …. We went to the most austere location of the country … and established a footprint where there wasn’t one previously. That puts us in kind of a problem there because … the equipment, the air support, the war fighting capabilities – exist in ISAF and we were not an ISAF unit, we were a CSTCA unit. A lot of people in the beginning felt ‘You’re just training and mentoring Army and police. Why do you need close air support? Why do you need Predator feeds? Why do you need ISR capabilities? Why do you need all this ammo? This doesn’t make sense. This isn’t how CSTCA has operated’ …We turned to our higher headquarters and said ‘I need you to be a source of supply for me for ammunition, for more equipment, for better force protection measures’ – camera systems, new technologies whatever it may be – as we determined our requirements.” The logistics officer stated that they quickly learned that TF Phoenix and CSTCA had little of the support capabilities needed, and approached the U.S. Army Combat Service Support Battalion (CSSB) 189 at Kandahar, part of Combined Joint Task Force 101 in the ISAF chain of command, who provided them common item support such as water, fuel, construction materials, and medical supplies. The Army CSSB also served as an ammunition supply point for USMC provided ammunition, but the CSSB did not have other USMC unique items, which in many cases had to be ordered from CONUS.