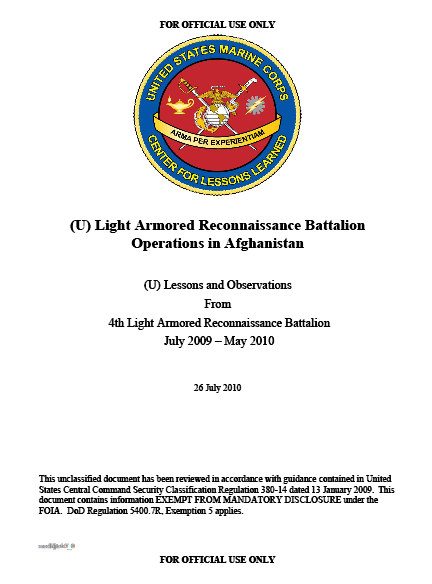 (U//FOUO) The battalion mobilized one month prior to participating in Enhanced Mojave Viper (EMV). Other than for drill weekends prior to mobilization, this four week period was the only time allotted for pre-deployment training (PTP). While the unit was able to meet all of its requirements, a longer mobilization period should be the goal.

(U//FOUO) During drill weekends, the battalion’s main effort was crew cohesion, conducting gunnery and scout integration and platoon level tactics, focusing on “brilliance of the basics.”

(U//FOUO) EMV was still in the process of converting from Iraq to an Afghanistan focus. It was also oriented around a standard infantry battalion and not an LAR unit.

(U//FOUO) The primary mission of the battalion is combined arms reconnaissance and security missions to shape the battlespace. Many of the operations conducted in Afghanistan were not typical LAR operations.

(U//FOUO) As with other units in Afghanistan, 4th LAR operated in a dispersed and distributed manner, often out of platoon size patrol bases. If such operations continue, the numbers of each vehicle variants may have to be modified to better support them.

(U//FOUO) Fluctuating information on force cap restrictions impacted the mobilization process and the decisions made on the final composition of the unit.

(U//FOUO) The late decision to mobilize the battalion impacted the mobilization process for Navy medical personnel and contributed to the delayed arrival of corpsmen to support the battalion.

(U//FOUO) The lack of replacements for casualties in country increased what was already a shortage of light armored vehicle (LAV) crewman for some of the companies.

(U//FOUO) Marine Corps Base (MCB), Camp Pendleton is a particularly well-suited intermediate location (ILOC) site for mobilizing reserve units, due to its proximity to Marine Corps Air Ground Combat Center, 29 Palms and EMV, although it may require more capacity and resources to support multiple units.

(U//FOUO) Some Marines continue to outfit themselves with personally procured equipment and gear.

(U//FOUO) While the upgraded LAV, the A2 variant, generally received praise as an overall improvement, many considered it underpowered with the Ballistic Protection Upgrade Package (BPUP) armor additions mounted.

(U//FOUO) Each platoon should have at least two Marines trained to operate UAVs.

(U//FOUO) Wasp performed well; a very quiet system, although they were susceptible to damage and replacements were not available. As the system was small and man portable, it extended a level of intelligence, surveillance and reconnaissance (ISR) and force protection to patrol bases and other areas where systems such as G-BOSS were not available.

(U//FOUO) The UAVs used by the unit generally received praise, but both Scan Eagle and Raven were cited as having a noise signature, which can have its own use as a deterrent and force protection, but limits some of their usefulness as a collection platform. Additionally, subordinate units, especially those operating from smaller COPs/FOBs, need to have access to overhead imagery and video, as well an imagery analyst to make it more useful.

(U//FOUO) Scan Eagle was very ineffective in trying to queue off other data collection methods due to its slow speed. LAR’s large AO also impacted the use of Scan Eagle because of range issues.

(U//FOUO) Opinion of the battalion leadership was mixed on the value of biometrics:

(U//FOUO) Commander‟s Emergency Response Program (CERP) funds rules and regulations can be very confusing and bureaucratic to use:

(U//FOUO) The amount of money spent is not an appropriate measure of success. It is simply a means to develop relationships.

(U//FOUO) The Department of State stabilization advisor had more flexibility in regards to spending so the battalion was able to work with him and combine monies to work on larger projects. Also, those projects that only required Marine expeditionary brigade (MEB) level concurrence, generally up to $500,000, were easier to receive approval.

(U//FOUO) Projects, whether bridges, roads, schools, or even playing soccer with local children were tactically important, because they often led to tips on IEDs and enemy forces.

(U//FOUO) The civil affairs group (CAG) detachment, with only four personnel, was undermanned; a team of at least eight, if not ten, was recommended. More team members would allow for decentralization and the ability to support separate COPs and patrol bases.

(U//FOUO) Civil affair projects were difficult to do in some areas. Local leaders would often be roadblocks and would only be relatively tolerant if the project were to benefit them directly.