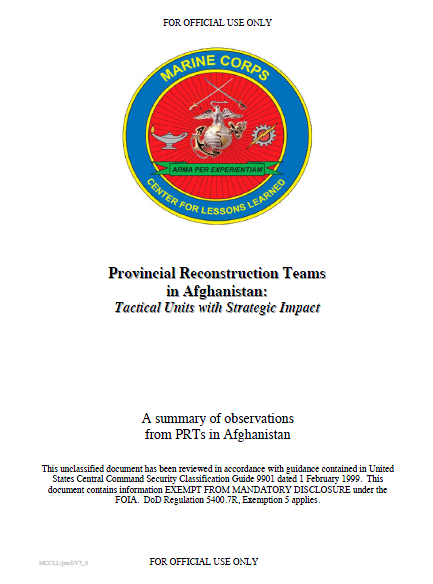 A Provincial Reconstruction Team (PRT) is a civil-military organization, task-organized to a geographical province, whose purpose is to extend the reach and legitimacy of the Central Government of Afghanistan by developing a self-sustaining, peaceful, civil-society. It is a tactical organization with strategic impact. The ratio of military to other governmental, United Nations (UN), and non-governmental organizations depends heavily on the degree to which the area is pacified. The success of a PRT is measured by its ability to increase Central Government capacity and good governance as well as to, “Seize the human terrain and defeat the enemy.” One important element of this is to identify and mentor key Afghan personnel in democratic governance and leadership.

The observations and lessons in this report are based mainly on information from three PRTs, particularly PRT Sharana located in the Paktika Province in southeastern Afghanistan. All the PRT personnel interviewed described their assignment as one of the most rewarding missions of their careers, but at times one of the most frustrating.

Because a PRT is a civil-military organization, doctrinal relationships regarding chain of command and command and control are often less than perfectly clear. Moreover, even when strategic and operational level doctrine is clear, it is not always followed at the tactical level as personality, maturity, experience, and resources often drive the local situation. The issue is further complicated by the fact that different nations have different command and control arrangements for PRTs, and by the potential presence of UN agencies, non-governmental organizations (NGOs) and other entities. Successful and efficient PRT efforts require full value from the participation and expertise of these organizations. Clarification of the relationships between U.S. departments and agencies, other government organizations, UN and other international organizations (IOs), and NGOs is needed, followed by training for leaders about these relationships.

Army Civil Affairs (CA) personnel received 14 weeks of training but said that they needed more preparation for the varied tasks needed to reconstruct and develop a foreign province. They stressed the need for detailed training in negotiating, contract development, evaluating and vetting contractors, and program budgeting and management.

The personnel assigned to a PRT are typically a mix of soldiers, Marines, airmen, and sailors of varying ranks, gender, MOSs, and active/reserve components, without regard to specific qualifications. The Sharana PRT Commander has an armor MOS and had no civil affairs experience or training prior to this assignment. A communications operator may be responsible for maintaining the vehicle fleet, while an infantry Marine may be responsible for the computer network and SATCOM equipment. Many of them are on their first deployment and have a noncombat MOS. Personnel assigned to PRTs need more pre-deployment civil affairs training and more force protection training, including the use of crew served weapons. The U.S. Army has recognized the need for specialized training of PRT personnel. U.S. Forces Command has issued specific guidance and established web-based training resources.

Cultural awareness at both the micro and macro level is critical to the success of a PRT. In at least one instance, a female US Army Civil Affairs (CA) officer filled a critical leadership position. In spite of her excellent credentials, she may be being set up for failure because of the cultural bias regarding women of the Afghani tribal leadership with whom she must negotiate. There is no repair parts block to support corrective maintenance on equipment. Parts are often cannibalized from destroyed HMMWVs to repair the remaining rolling stock.

The PRT commander and his designated Commander’s Emergency Response Program (CERP) manager need to be adequately trained in CERP processes and regulations prior to deploying. In addition, the use of contracting officers and standard procurement procedures is encouraged to maintain the fiscal integrity of their CERP programs, particularly for large high dollar projects. Some PRT personnel, and other relief and assistance personnel, perceive that the principal measure of effectiveness (MOE) is based on spending money rather than achieving results. The local population, among whom corruption seems to be commonplace, readily exploits this. ‘Skimming off the top’ graft at all levels reduces the resources getting to the people who have the greatest needs. Political and economic corruption is an Afghan cultural problem that is systemic at all levels in the country.