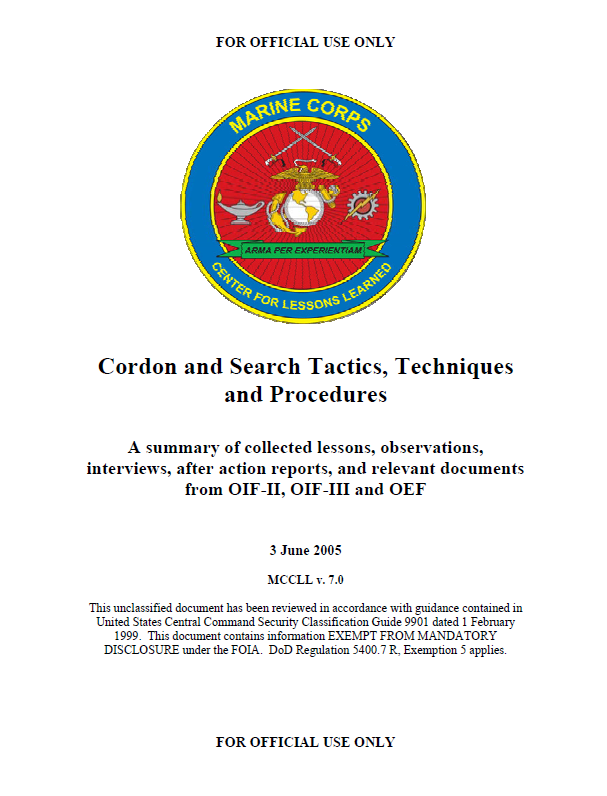 Cordon and Search Tactics, Techniques and Procedures A summary of collected lessons, observations, interviews, after action reports, and relevant documents from OIF-II, OIF-III and OEF

Information resident in the MMCLL LMS reflects frequent employment of Marine forces in cordon and search and cordon and knock operations, with the preponderance of observations stemming from OIF II and OIF 04-06. This document includes numerous functional area and tactical recommendations discussed in the LMS, but reaches no conclusions concerning the validity of current doctrine as it was applied in OIF.

Cordon and search missions have been an almost daily activity in conjunction with other tactical operations within Stability and Support Operations (SASO) in both OEF and OIF. As in all tactical operations, units refined individual tactics, techniques and procedures (TTP) to meet the requirements of the situations they encountered. Cordon and search activities were not always conducted as discreet missions but as supporting operations within SASO, and can begin as less invasive “cordon and knock” efforts to gain information, and rapidly evolve into “cordon and raid” or “cordon and destroy” as the tactical situation dictates. While these terms may not be found in doctrinal references, units in their observations use them.

Units cited preparatory actions in planning SASO that presumed the need to rapidly transition between missions within the “three block war”. The requirement for tactical flexibility in task organizing for Military Operations Other Than War (MOOTW) as well as combat operations in a MOUT environment is reflected in observations and lessons included in the LMS. Hasty cordon and search was rehearsed and executed as a planned immediate action following Improvised Explosive Device (IED) detonation by units in OIF II.

Specific doctrinal deficiencies regarding cordon and search were not noted in the document review. Cordon and search doctrine and tactics were applied in at least one “Millennium Dragon 2” experiment conducted by the Marine Corps Warfighting Laboratory, without comment in the final report.

Marine Corps experiences in OIF II truly reflect the concept of the 3-Block War, and cordon and search/knock/raid/destroy missions have provided key examples, observations and lessons across the spectrum of conflict in both the urban and rural battlespace.

There are numerous publications that provide guidance on conducting cordon and search operations. The following is extracted from observations and represents the common recommendations submitted. This mission involves isolating a pre-designated area by cordoning it off and systematically searching for enemy personnel, weapons, supplies, explosives, or communication equipment. Here is the technique for a squad-sized urban patrol in what is called a point search: a search of one house or building identified by intelligence as a possible cache.

• To the maximum extent possible, to conduct it with limited inconvenience to the population.

─ The populace may be inconvenienced to the point where they will discourage urban guerillas/insurgents from remaining in the area, but not to the point that they will assist the enemy as a result of the search.

• Assault & Security elements patrol elements establish an inner cordon around the target building to seal it off, with the primary intent of preventing movement out of the targeted building.

─ Cover routes leading into the area in order to prevent outside interference or reinforcement.

• Reaction force maintains a reserve to reinforce either the inner or outer cordon, or react to problems such as civil disturbance in response to the operation.

• Once cordons are established, the commander, with assistance of local police and/or translators, does the following:

─ Informs the locals that a building is about to be searched.
─ Establishes a house curfew if permitted by higher HQ.
─ Requests that all occupants remain indoors.
─ Instructs occupants within the target house to gather at a central location to facilitate the search operation.

─ Include a female searcher if appropriate and available.

• Have the head of the household accompany the search party throughout the operation to prevent denial of incriminating evidence and possible accusations of theft and looting against Marines.

• Have a prominent member of the local community accompany the search party―if at all possible―to act as a witness.

• Evacuate any suspicious/apprehended persons as soon as possible.

• Search the building(s) from top to bottom.

• Ideally, conduct the search with the assistance of combat engineers using mine detectors to
locate hidden arms and ammunition.

• If the targeted building is empty or the occupant refuses entry to friendly forces, it may be
necessary to forcefully enter the premises to conduct a search.

• If an unoccupied house containing property is searched, make arrangements to secure it until
its occupants return.

─ Either with local police or own forces.