For more background information on this document and its importance, see: 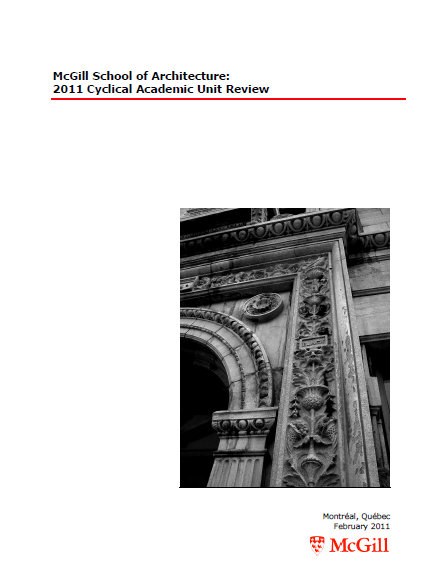 On June 30th 2011, Michael Jemtrud, Director of McGill University’s School of Architecture for four years now, stepped down from his post. An event which left the students and staff confused.  This event took place a few weeks after the completion of a trial process instigated by the university called the Cyclical Academic Unit Review. The SoA (School of Architecture) and SoUP (School of Urban Planning) were test subjects for this pilot project.

Professor Jemtrud’s resignation was not announced to students. Efforts from the students to reach out and ask questions about this produced these answers:

1. Professor Jemtrud resigned from his administrative duties in order to follow up on personal projects and research (Annmarie Adams in an interview to the McGill Daily).

2. There was no more faith in Professor Jemtrud’s leadership, and measures needed to be taken to ‘resolve’ the situation, even if it involved spending more money (referring to a severance package and to the added cost of a second director salary).

3. Professor Jemtrud had committed unethical acts and the gag order put in place on Jemtrud and those involved – whoever they were – was to protect his reputation (told on many occasions by Aaron Sprecher and Martin Bressani to numerous students including during a recorded conversation).

In the aftermath of Jemtrud’s department, Derek Drummond – a man who had served as the SoA’s director for almost 20 years, and who had dedicated more than 40 years to teaching – resigned. No announcement was made. Ricardo Castro – associate director – stepped down from his post. No announcement was made. Those who asked about these events were told that the three were isolated incidents that were not related.

This document, the Cyclical Academic Unit Review (referred in the document as AUR) brings clarity to a lot of the events of the last 5 months.

It outlines the problematic relationship between the SoA and the Faculty of Engineering, a conclusion that both reviewing committees come to after their interviews and assessments, and an ambitious and thorough plan of Jemtrud’s to give the SoA more autonomy and to bring in new disciplines and program. It also brings to the table a generous endowment that would facilitate the transition, a gift that is conditional upon the SoA’s independence. In this, it is clear that Jemtrud had no intention of leaving the SoA to pursue personal research; he was very much dedicated to his vision.

The AUR also attests to the fact that there is a clear division in the faculty over their support of Jemtrud. However, both teams of reviewers find Jemtrud’s work over the last 4 years exemplary. They attest that he has steadily brought the school to a level where it can compete with international giants like the GSD and the AA. Moreover, the review committees highlight that Jemtrud has managed to create important redundancies in the curriculum which will eventually reduce costs and allow the SoA to turn over its recent deficit (a deficit which can be linked to the way in which the Faculty of Engineering redistributes funding). In this, it makes clear that although Jemtrud’s leadership might have been in question, this came from within the faculty of the SoA and this was a sentiment not reciprocated by the committee, nor was it backed up by any evidence or verifiable data.

As for the unethical and immoral acts, Dean Christophe Pierre spoke on record and confirmed that this was not the case, and that Jemtrud was simply asked to leave the school because it needed ‘a cooling off period’.

Of course, there is a lot more in the report.

Those who participated in the writing of this document, staff, students and the reviewers were told that this document would be presented at the University’s first Senate meeting in mid-September.

Students who asked to see the document, hoping to find in it some explanation for the swift and drastic changes made in the school, changes that had a direct impact on their academic careers, were told that the document was always intended to serve only as advisory to the Provost and as such would only been seen by an academic review committee, who would in turn draft a report (of the AUR) and present its findings to the Senate. The first meeting came and went, and the document was not brought up, not even alluded to.

Over the last four months, the individuals who stood up to question the significant changes within the SoA were either ignored or intimidated into keeping their voices down. When they commented on the significant lack of transparency over the mentioned processes, they were told transparency was not necessary. When they asked for a public presentation by the new director to discuss the events of the summer, the significant changes in classes and curriculum, or simply an indication of the new direction of the school (and how it is an improvement over Jemtrud’s), they were told these questions could perhaps be addressed personally but that answers were not guaranteed and the public forum was not the proper place for this.

McGill is a public institution, and the SoA a very small community within it. Given the current position of McGill vis-a-vis the MUNACA strike, it has become evident that the hierarchical distribution of power has led to certain abuses; this perhaps being one. The publication of this document is important such that it may allow students, parents, teachers, potential students to ask the proper questions. The new directors of the school, Annmarie Adams, David Covo and Martin Bressani said (on record and in a recording) that the university was a corporation and their first interest was not education. If education is a business, shouldn’t we know what we are paying for?