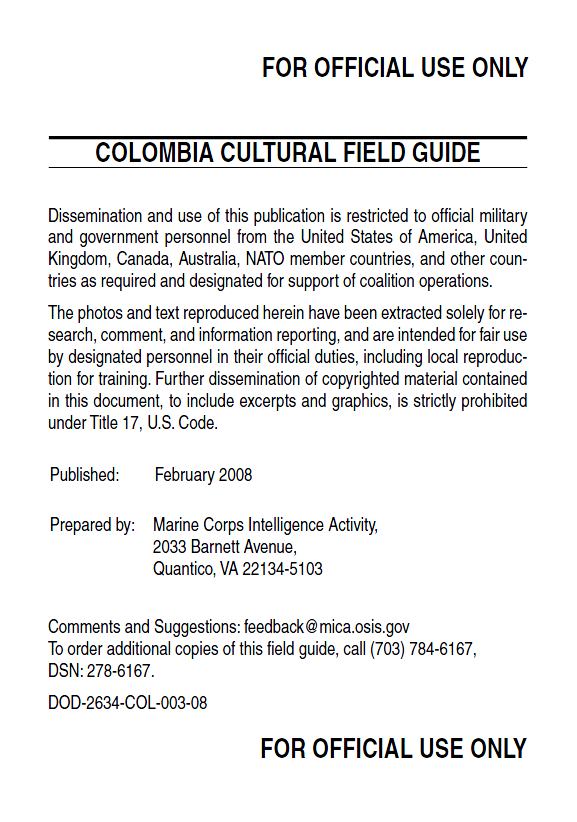 The Colombia Cultural Field Guide is designed to provide deploying military personnel an overview of Colombia’s cultural terrain. In this field guide, Colombia’s cultural history has been synopsized to capture the more significant aspects of the Colombia cultural environment, with emphasis on factors having the greatest potential to impact operations.

The field guide presents background information to show the Colombia mind-set through its history, language, and religion. It also contains practical sections on lifestyle, customs and habits. For those seeking more extensive information, MCIA produces a series of cultural intelligence studies on Colombia that explore the dynamics of Colombia culture at a deeper level.

Modern Colombia retains race and class hierarchies that were originally established during the colonial period. Within these hierarchies, the white elite generally occupy the top of Colombian society, followed by the mestizos, and finally by Afro-Colombians and indigenous peoples. Exceptions to this social structure do exist, but ethnicity-based social stratification is common in Colombia.

Inheriting power from their colonial ancestors, the white elite has structured Colombian society to fit its needs, creating a society designed to reaffirm colonial structure and grant the elite sole access to political, social, and economic power. Colombia’s white elite continues to view the indigenous and black populations, and to a lesser degree the nation’s mestizo population, as inferior. Whites define themselves as civilized, cultured, urbane, and decent; they believe other ethnic groups lack these qualities.

White Colombians, in general, are physically similar to Anglo-North Americans or Europeans; however, they can also have a slightly darker skin tone than what one might consider Caucasian in the United States.

Mestizos, individuals of mixed Spanish and indigenous descent, began as the lower-class in colonial society but eventually grew into a large and dominant middle-class. Mestizos emerged as an ethnic group soon after the Spanish Conquest. The word mestizo (mixed race) was first used by the Spanish to describe a child of a Spanish father and an indigenous mother. The mestizo ethnic identity quickly acquired a cultural and ethnic dimension. After Colombia gained its independence, a state-sponsored process of mestizaje (blending cultures) attempted to promote a broader national mestizo identity.

This process, called mestizaje, increased the mestizo population in Colombia by incorporating people from both the indigenous and white ethnic groups. The process of mestizaje also provided more opportunities for mobility among classes. A mestizo who is wealthy, has attended an elite educational establishment, and has internalized the mannerisms and customs of white society, is capable of achieving political power through elected office and isable to establish himself as a member of the political elite, a status typically reserved for Colombian whites.

Social gatherings among whites and mestizos generally provide a chance to get to know friends and family. Topics of business, politics, and religion should be avoided during social gatherings, unless someone else brings it up.

At indigenous social gatherings, drinking is very common and is expected of all those present. Age and gender are factored into the seating arrangement in an indigenous household. Men are given chairs. A male visitor deemed particularly important may also be seated in the center of the room while others stand. Women, even visitors, will be seated on the floor. Children normally are not allowed to be in the same room when visitors are present. Eat and drink everything that is offered to you when visiting a home or party. The food may be difficult to identify, but sharing food is a basic function of personal relationships, and refusing food or drink can offend indigenous peoples.

Hospitality is central to Afro-Colombian culture. By welcoming others into their homes and lives, Afro-Colombians demonstrate a mutual respect and solidarity with others. Guests should likewise pay respect to the host and his family with profuse thanks and appreciation. In addition to the Afro-Colombian culture, it is common to encounter hospitality in any poor household. An obligation to share what little one has is a widely-held value among poor, especially rural, Colombians.

Negotiations often take a great deal of time in Colombia. Colombians emphasize the long-term cultivation of business relationships. Expect to meet several times before an agreement is reached.

Be punctual for business meetings, but be prepared for your contacts to arrive late and for meetings to be slow to start. A period of introductions and coffee before business is common. Urban business men and women dress professionally; a suit and business card is expected. Conducting business in English is common but should not be expected; it is polite to speak in Spanish or to have a translator present. Though not necessarily the case for executives in major urban areas, many Colombians take a 2-hour break in the middle of the day, and most businesses and government agencies do not operate during this period. It is generally considered inappropriate to discuss business in social situations, including a business lunch.

In social situations, Colombians adhere to a different concept of punctuality than is common in the United States. Schedules operate as general guidelines rather than rigid structures. It is typical for Colombians to arrive half an hour late for most events, and it is polite to arrive at least half an hour late to a social gathering.

■■ Do try to speak Spanish or an indigenous language. Colombians will appreciate the effort.
■■ Do eat all food offered. Failing to do so is disrespectful.
■■ Do be tactful when discussing local politics. Colombians can be easily offended if they believe that they are being criticized by someone from the United States.
■■ Do respect rank structure. Colombian officers adhere to rank and protocol more stringently than U.S. officers.
■■ Do use a strong tone of voice during instruction.
■■ Do expect strict rules and customs against fraternization to be followed.
■■ Do incorporate basic principles into training, such as weapons maintenance.
■■ Don’t use slang terms to describe people of different races. While it is common among Colombians, it is not acceptable for foreigners.
■■ Don’t be offended if foreign troops use slang terms like gringo (pejorative term for white person).
■■ Don’t refer to the United States as America, as Latin American schools teach that the Americas are one rather than two continents. Colombians consider themselves American. Terms such as North America or the United States are more appropriate.
■■ Don’t be insulted if trainees interrupt to ask questions or make comments, as this is common.
■■ Don’t be surprised if trainees require more basic lessons and assistance than expected.
■■ Don’t be blunt, as social and business relations are cushioned by a thick layer of civility.