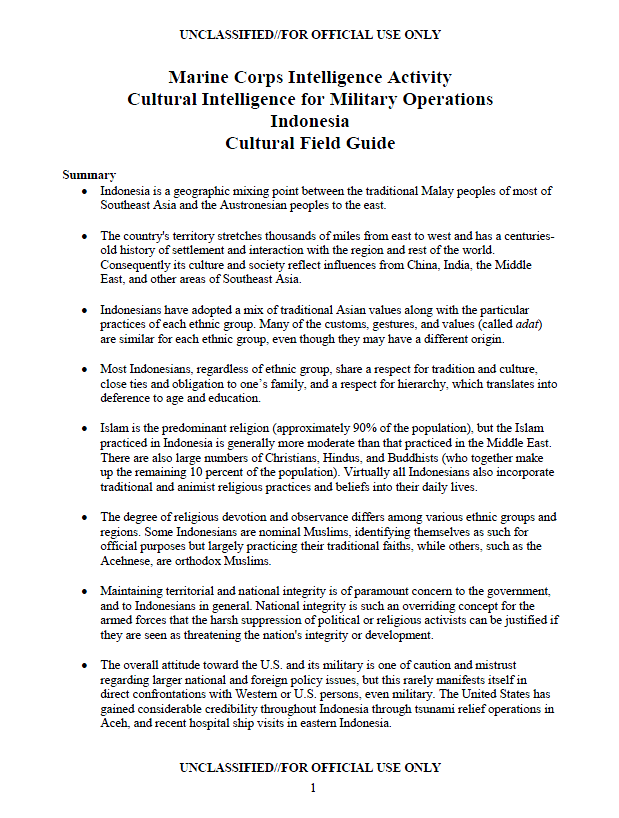 Indonesia is a geographic mixing point between the traditional Malay peoples of most of Southeast Asia and the Austronesian peoples to the east.

The country’s territory stretches thousands of miles from east to west and has a centuries-old history of settlement and interaction with the region and rest of the world. Consequently its culture and society reflect influences from China, India, the Middle East, and other areas of Southeast Asia.

Indonesians have adopted a mix of traditional Asian values along with the particular practices of each ethnic group. Many of the customs, gestures, and values (called adat) are similar for each ethnic group, even though they may have a different origin.

Most Indonesians, regardless of ethnic group, share a respect for tradition and culture, close ties and obligation to one’s family, and a respect for hierarchy, which translates into deference to age and education.

Islam is the predominant religion (approximately 90% of the population), but the Islam practiced in Indonesia is generally more moderate than that practiced in the Middle East. There are also large numbers of Christians, Hindus, and Buddhists (who together make up the remaining 10 percent of the population). Virtually all Indonesians also incorporate traditional and animist religious practices and beliefs into their daily lives.

The degree of religious devotion and observance differs among various ethnic groups and regions. Some Indonesians are nominal Muslims, identifying themselves as such for official purposes but largely practicing their traditional faiths, while others, such as the Acehnese, are orthodox Muslims.

Maintaining territorial and national integrity is of paramount concern to the government, and to Indonesians in general. National integrity is such an overriding concept for the armed forces that the harsh suppression of political or religious activists can be justified if they are seen as threatening the nation’s integrity or development.

The overall attitude toward the U.S. and its military is one of caution and mistrust regarding larger national and foreign policy issues, but this rarely manifests itself in direct confrontations with Western or U.S. persons, even military.

The United States has gained considerable credibility throughout Indonesia through tsunami relief operations in Aceh, and recent hospital ship visits in eastern Indonesia.

The national language, Bahasa Indonesia (“Indonesian Language”), is a standardized form of the Malay language. It is the common language of commerce and interaction throughout the country. However, there are also hundreds of regional or ethnic languages and dialects, often distinct to individual villages or locales, and the level of proficiency in Bahasa Indonesia is lower in more remote areas of the country. In many cases, an individual will use the local or ethnic language in daily life, but Bahasa Indonesia for communicating with members of other ethnic groups or the government. English proficiency declines dramatically outside urban areas, with virtually no English capability in rural villages. Though Indonesians are predominantly Muslim, Arabic is not commonly used in the region except in the most orthodox Muslim provinces.

Most Indonesians will likely exhibit some Western manners and behaviors but also retain distinct cultural values at the same time.

Religion plays a large role in the mindset and daily life of most Indonesians. Many relationships are established with initial questions regarding religion (as well as family status and occupation. Adat, or customary law, guides the important ceremonies and events in life, such as birth, coming of age, and marriage.

The Chinese tend to value success, measured in both academic and economic terms; the Chinese community tends to be better educated than the other ethnic groups. They also play a disproportionate role in the country’s economy.

Eating customs differ among Indonesia’s ethnic groups, as well as within each ethnic group. Rice is the most common food, an essential ingredient of any meal. Taro is also a major source of starch. Given the proximity of the sea, fish and other sea foods are prevalent. Shrimp paste is a standard part of many dishes. Most meals also will feature at least one vegetable dish, usually more. Green beans are very popular, fixed in a variety of ways. Coconut milk and palm oil are often the basis of many sauces. Beef is enjoyed, but is not common, and what is called beef is often water buffalo. Pork is exceedingly rare, especially in Muslim areas. Most Indonesian foods contain shrimp or shrimp paste, peanuts, palm oil, chilies or other hot spices, and coconut milk. Milk and dairy products are rare.

Plates and bowls of food are usually laid out in the center of a table, where it is eaten communal style, with people taking a small portion to their own plate before being placed in the mouth. It is rude to pass food between two people with chopsticks—allow the food to be placed on a plate before picking it up. Guests are often served food by their hosts, and it is considered rude to leave food on the plate. Drinks and small dishes are passed using the right hand or both hands. Use of the left hand for anything other than providing support to the right hand for a heavy dish should be avoided. The left hand should not be used to signal or pass things to others. Meals can last several hours, especially formal or official dinners. Placing a hand or leaving ones chopsticks over the plate signals that one is finished eating.

Most urban Indonesians wear Western-style clothing, sometimes in combination with a few traditional articles that are unique to their ethnic group. Many men wear the traditional sarong with a loose tunic for a shirt. Most women wear the hijab head covering, with a tunic that covers their arms down to their wrists. Western dress, such as blue jeans and short-sleeved t-shirts, are often worn by younger individuals and in Westernized/tourist areas. It is advisable to dress conservatively whenever leaving urban areas, and especially when going into remote village areas. Men should wear long pants and a long-sleeved shirt (with the sleeves down). Women should also dress conservatively, covering their arms and legs to at least below the knee, ideally to the ankle. Women should carry a scarf with which to cover their heads if the need arises.

Clothing that is considered appropriate Islamic fashion has gained in popularity after the fall of Suharto in 1998. Under Suharto, traditional Muslim clothing often was seen as a sign of backwardness and militancy. Traditional Islamic clothing has recently become increasingly important for both women and men, both as a personal statement of freedom of clothing, and also due to widespread public pressure. Men may wear a songkuk (skull cap) and a sarong, usually with an untucked loose long-sleeved shirt. Women increasingly wear the hijab head covering, but in a variety of highly fashionable colors and fabrics. Women in urban areas sometimes wear the hijab with tight jeans and tight t-shirts, but many women and young girls also wear the more conservative baju kurung outfit. Chinese rarely wear non-Western clothing other than perhaps a sarong in informal settings.