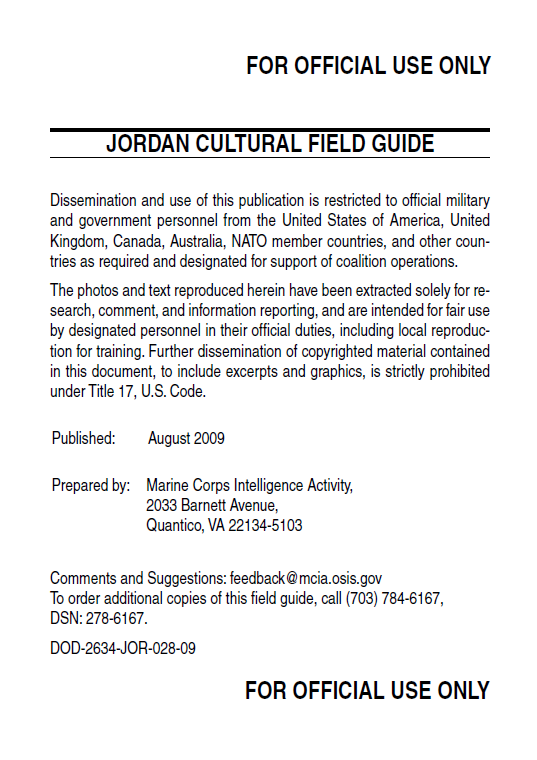 The field guide presents background information to show the Jordan mind-set through its history, language, and religion. It also contains practical sections on lifestyle, customs and habits. For those seeking more extensive information, MCIA produces a series of cultural intelligence studies on Jordan that explore the dynamics of Jordan culture at a deeper level.

Jordan has a patriarchal society. Within the family, members interact under a well-understood hierarchy based on age and gender; gender garners more authority than age. The eldest male, typically the father, is the decision-maker. It is generally considered unacceptable for other family members to challenge his authority in public. However, family members can influence him in private, commonly by enlisting the support of the eldest female. Despite this general hierarchy, Jordanian families are diverse; factors such as employment, residence, and religion also influence hierarchy within families.

Traditional Jordanian society was also influenced by a hierarchy based on lifestyle and mobility. Camel-herding tribes considered themselves the most noble. They demanded that lower-ranking tribes and settled populations pay tribute to the tribes for protection. However, each tribe, regardless of lifestyle, felt superior to other tribes and espoused long tribal histories and lineages to claim their nobility. Most tribal Jordanians have settled in villages or urban areas; however, claims of tribal superiority are still common. Most tribesmen know the basis of their tribe’s historical claims of nobility.

The influence of hierarchy in Jordan is limited by shared ideals of autonomy and independence. Tribal autonomy is a strong ideal among Jordanian tribesmen. Many consider the lack of tribal autonomy in contemporary society a sign of tribal weakness. The desire for autonomy also shapes internal tribal relations. Tribal leaders have authority; they are considered first among equals and rule through example and persuasion.

Jordan’s lack of historical or naturally defined borders hamper efforts to establish a national identity. Most of its population has lived in Jordan for less than a century. Still, national identity has become important for many Jordanians. Jordan’s national identity has been actively cultivated by the state, which focuses on tribal heritage, the role of Jordan’s leaders in the Arab Revolt, and the Hashemites’ descent from the Prophet and guardianship of religious sites. National identity has also been reinforced as citizens develop vested interests in the bureaucratic and military institutions of the state. As younger generations are born and raised in Jordan, they increasingly consider themselves “Jordanian.”

Iraqi refugees have had a significant impact on Jordan. It is estimated that there are between 450,000 and 750,000 Iraqi refugees in Jordan. Most arrived after 2006. The impact of these refugees has been mixed. Most Jordanians view the refugees negatively and believe they are draining the country’s resources and raising unemployment rates. However, the actual effects have been more balanced because Iraqis are generally well educated and some have invested money in Jordan’s economy. The government is eager to secure economic aid to help with the burden of the refugees; however, the state is wary of providing refugees with services that might encourage long-term settlement.

Foreign workers are also a significant part of Jordan’s society. Most foreign workers come from Egypt; however, there are also large numbers of workers from Pakistan and the Philippines. Foreign workers fill low-wage positions throughout Jordan. It is estimated that female migrant workers in the domestic sector in Jordan number 60,000 to 70,000. There are few regulations protecting these workers. Allegations of abuse at the hands of their employers are common.