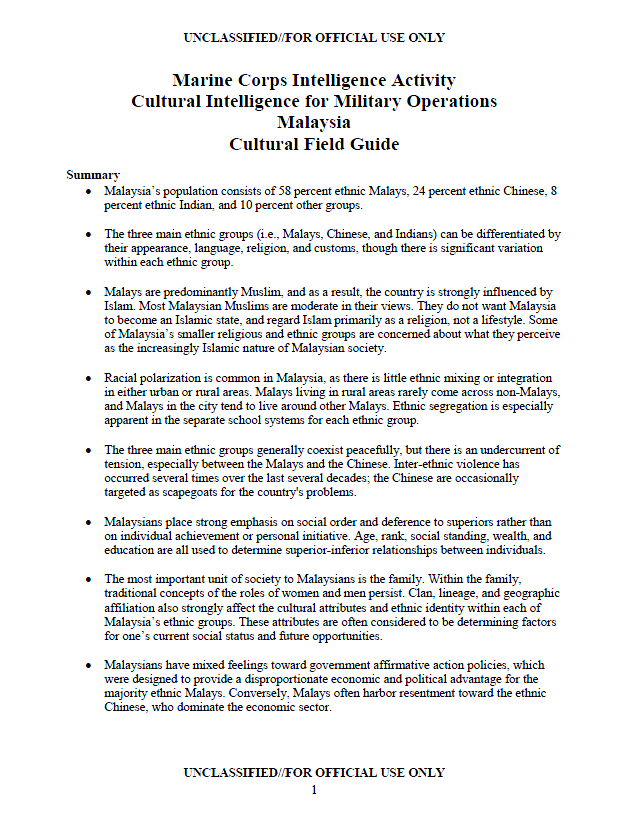 The three main ethnic groups (i.e., Malays, Chinese, and Indians) can be differentiated by their appearance, language, religion, and customs, though there is significant variation within each ethnic group.

Racial polarization is common in Malaysia, as there is little ethnic mixing or integration in either urban or rural areas. Malays living in rural areas rarely come across non-Malays, and Malays in the city tend to live around other Malays. Ethnic segregation is especially apparent in the separate school systems for each ethnic group.

The three main ethnic groups generally coexist peacefully, but there is an undercurrent of tension, especially between the Malays and the Chinese. Inter-ethnic violence has occurred several times over the last several decades; the Chinese are occasionally targeted as scapegoats for the country’s problems.

Malaysians place strong emphasis on social order and deference to superiors rather than on individual achievement or personal initiative. Age, rank, social standing, wealth, and education are all used to determine superior-inferior relationships between individuals.

The most important unit of society to Malaysians is the family. Within the family, traditional concepts of the roles of women and men persist. Clan, lineage, and geographic affiliation also strongly affect the cultural attributes and ethnic identity within each of Malaysia’s ethnic groups. These attributes are often considered to be determining factors for one’s current social status and future opportunities.

Malaysians have mixed feelings toward government affirmative action policies, which were designed to provide a disproportionate economic and political advantage for the majority ethnic Malays. Conversely, Malays often harbor resentment toward the ethnic Chinese, who dominate the economic sector.

• One gets another person’s attention by waving all fingers of the right hand with the palm facing down, in a downward fanning motion; it is considered rude to wave by curling the fingers with the palm facing up
• Pointing at someone or forming the rounded “okay” sign with the fingers is considered rude; to point to something or someone, it is best to open the palm facing upwards and extend the hand in that direction
• It is always better to use the right hand to give and receive objects or to point
• Prolonged direct eye contact may be interpreted as a sign of aggression; it is polite to catch a counterpart’s eyes for a second, then lower the head and look down
• The head is the most sacred area and should not be touched by others unless absolutely necessary
• The foot is considered the lowest part of the body, so it is rude to show the bottom of one’s feet or soles, or to move important objects with a foot; most Malaysians cross their legs at the ankle when sitting instead of resting the ankle on the knee
• Tapping the foot implies a lack of interest
• Pounding a fist into an open palm is considered rude or vulgar

While conversing or listening, Indians commonly shake their head from side to side in a circular way resembling the way Americans signal “no.” For Indians, this movement signifies consent or agreement with what is being said, or appreciation for what they are hearing.

• It is generally impolite to arrive late for meetings and business events, though many Malaysians do not follow the practice of punctuality
• It is common to remove shoes before entering private homes and most sacred sites
• All ethnic groups place a strong emphasis on family, and tend to visit relatives often
• It is usually impolite to refuse initial offers of food or drink; to refuse seconds, place the hand above the plate; when finished, place the utensils together perpendicularly on the plate; if they are not placed together, more food may be offered

The concept of saving face is significant in negotiations with all Malaysians, and most significantly with the Chinese. A person loses face by making a mistake, failing to live up to others’ expectations, demonstrating ignorance, or losing his composure. One gains respect by remaining dignified and by showing respect to others, by showing care for guests, arriving early or on time to a meeting, praising someone in front of that person’s superior, and not drawing attention to others’ mistakes in public. During negotiations, if negotiators feel at any time that their own image or that of their organization or country has been harmed, they may terminate the discussions. It is also considered a loss of face to say “no” outright. Phrases like, “It is difficult,” or, “It is inconvenient,” are used instead. Subtle changes in body language also give clues to the outlook of the negotiator. Leaning forward slightly tends to signal agreement, while having a stern face or looking down indicates opposition to the idea. Raising one’s voice is not likely to be productive, as it causes a loss of face for all involved.

Malaysians maintain separation of the sexes in terms of displays of affection. They generally do not touch members of the opposite sex in public, and public displays of affection are more rare than in the West. However, this attitude is less strictly observed by younger Malaysians and non-Malays, and is most evident in urban areas.
Business

Malaysian business frequently draws on family and personal connections. Therefore, nepotism is considered good business practice rather than a corrupt practice. Introductions or referrals are extremely important for an outsider conducting business in these cases. It is customary to arrange meetings in advance, and meetings are generally more successful when arranged by a mutual acquaintance if the parties do not initially know each other.

Malaysians have an appreciation for U.S. culture, especially popular culture. U.S. movies and television programs are broadcast with both Malay and Chinese subtitles, although they are frequently censored for content. Some Malays have strong negative views toward the United States because of its perceived immoral and overtly sexual culture. U.S. involvement in the Israeli-Palestinian conflict and as military operations in Afghanistan and Iraq also have caused many Malays to consider the United States as being anti-Islamic. Misbehavior by U.S. service members is often used as a pretext to voice these grievances. Other Malaysians see the United States as providing an important counterbalance to increasing Chinese influence in the region.

Other Ethnic and Regional Groups

After gaining independence, Malaysia had tense relations with its regional neighbors and the minority ethnic groups within its borders. Malaysia continues to have a somewhat strained relationship with its northern and southern neighbors, Thailand and Singapore, respectively. Thailand has implied that its problems with Islamic insurgents have been complicated by insurgents which may have trained or been based in Malaysia. Singapore and Malaysia have not fully reconciled their differences regarding the race-driven separation of the ethnic-Chinese city-state from the Malaysian Federation in the 1960s. The Malays are particularly uncomfortable with the economic success of ethnic Chinese throughout Southeast Asia, and view the Chinese as a threat, especially with the growing economic and military power of the People’s Republic of China.