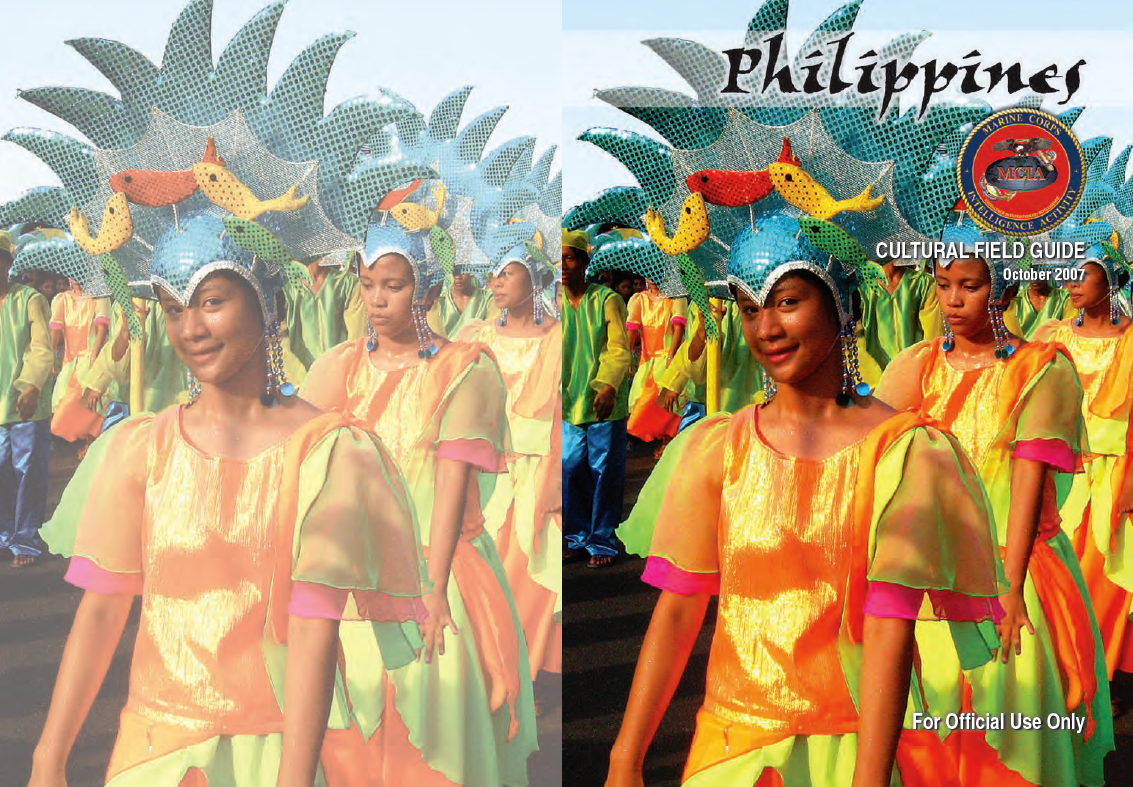 The field guide presents background information to show the Philippine mind-set through its history, language, and religion. It also contains practical sections on lifestyle, customs and habits. For those seeking more extensive information, MCIA produces a series of cultural intelligence studies on the Philippines that explore the dynamics of Philippine culture at a deeper level.

Culture in the Philippines comprises a mixture of traditions from early indigenous Philippine groups; Spanish, Japanese, and American occupiers; and influences from the Chinese, Indonesians, and Indians. This unique blend of tradition and influence has shaped the overall cultural landscape of the Philippines. The people of the Philippines are typically grouped by religion, culture, and geographic regions that are distinguished by characteristic traits, beliefs, and languages. There are many ways to classify the people of the Philippines although no specific grouping will truly include every Filipino. Centuries of intermarriage in the Philippines have led to a unique blend of diverse ethnic and linguistic groups with Chinese, Malay, Spanish, and American ancestry. Most Filipinos identify themselves through their shared cultural history, ethnicity, language, geographic location, village (barangay), or their town, and their religion.

The Philippines is a majority Christian nation (93 percent); approximately two-thirds of the population adhere to Roman Catholicism and the rest are Protestants or members of indigenous, independent churches. Filipino Muslims make up approximately five percent of the population and are found predominately in western Mindanao and the Sulu archipelago. These Muslims share their religious beliefs with the neighboring majority Muslim nations of Indonesia and Malaysia. The rest of the approximately two percent of the population is composed of Buddhists or Taoists (the Chinese overseas population in particular), Hindus, and indigenous peoples who retain their pre-colonial, pre-Islamic or Christian belief system to varying degrees.

The Muslim insurgency in the Philippines’ southern islands was formed in response to a loss of ancestral lands to Christian immigration in the 20th century, a loss of political autonomy during the American colonial period, the Muslim religious minority status, and their feeling of marginalization by the Philippine government. There are various armed Muslim insurgent groups seeking independence or an expansion and reconfiguration of the current Autonomous Region of Muslim Mindanao (ARMM) in the southern Philippines. There is also an ongoing armed struggle by Communist insurgent groups in the Philippines seeking to overthrow the current regime. These armed groups have helped to create political, economical, and societal instability in the country.

■ Bayanihan is the belief in creating alliances with neighbors and the helping attitude whenever one is in need.

■ Especially in rural areas, the communal spirit is crucial to the success of the farming enterprise and labor is gladly offered to a neighbor in need.

■ Reciprocity of favors is expected.

■ The primary societal welfare system for the Filipino is the family, which explains the close familial ties in society.

■ Respect for elders is a deep seeded value which is expressed in many areas by bringing the right hand of the elderly (to include parents, uncles, people in authority, the elderly) to one’s forehead.

■ To receive favors from Filipinos, it is often essential to obtain approval or acceptance from their families.

■ Gift giving begins in the family and it is customary to give gifts for Christmas, birthdays, weddings, anniversaries, baptisms, and other significant events.

■ The extended Filipino family concept is inclusive and often includes cousins, uncles, close friends of parents or siblings, and others who are accepted into the family circle.

■ Pakikisama, or harmony, in English entails getting along with others to preserve a harmonious relationship. This is often expressed by common courtesy, a pleasant greeting. Often this value leads to conformity for the sake of a relationship, avoiding confrontation, not discussing sensitive issues, etc.

■ Hospitality is an expression of this value, and families will bend over backward to open up their homes and resources to establish and promote harmonious relationships.

■ Utang na Loob, or debt of gratitude, is owed to a person who has helped one through hardships endured. An example of this value is that Filipino children do everything in their power to care for their aging parents.

■ Reciprocity is a way of paying this debt of gratitude, if not directly back to the benefactor then indirectly through the benefactor’s family or village.