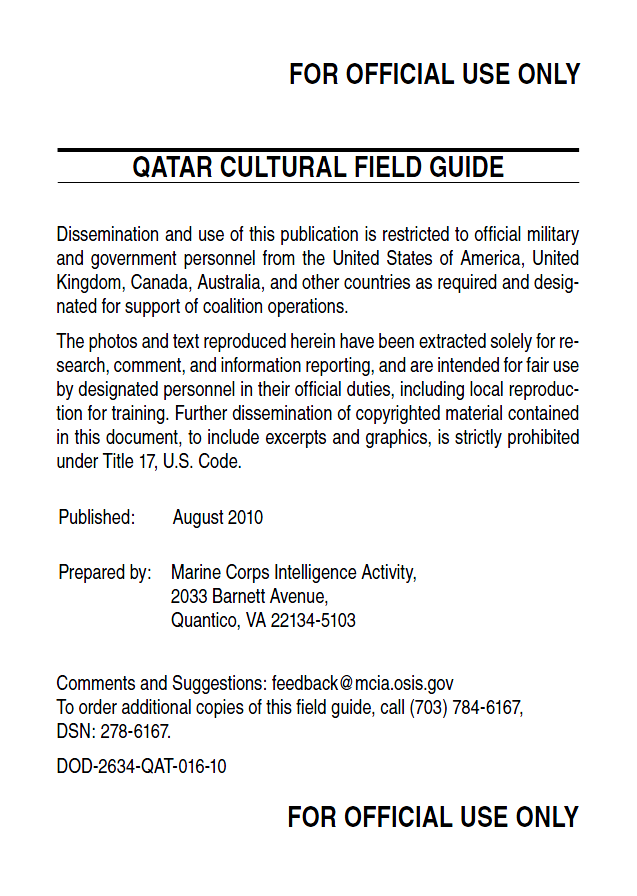 The Qatar Cultural Field Guide is designed to provide deploying military personnel an overview of Qatar’s cultural terrain. In this field guide, Qatar’s cultural history has been synopsized to capture the more significant aspects of the country’s cultural environment, with emphasis on factors having the greatest potential to impact operations.

The field guide presents background information to show the Qatar mind-set through its history, language, and religion. It also contains practical sections on lifestyle, customs and habits. For those seeking more extensive information, MCIA produces a series of cultural intelligence studies on Qatar that explore the dynamics of Qatar culture at a deeper level.

The State of Qatar is a small country on a peninsula in the Arabian Gulf. As of 2009, its population was more than 800,000 people. Although English is widely spoken, the official language is Arabic. The official religion is Islam. Approximately 85 percent of Qatari citizens are Sunni Muslims, who follow the Wahhabi form of Islam, and 15 percent are Shi’a Muslims. Qatar has been ruled by the al-Thani family for more than a century. Today, the emir of Qatar and members of his family control nearly all aspects of the government. During al-Thani rule, Qatar has been transformed from a collection of underdeveloped coastal villages subsisting on pearling and fishing to one of the wealthiest oil- and gas-producing states in the world. Qatari citizens have the second highest per capita income in the world—US$121,400 (2009 estimate).

Approximately 200,000 citizens of Qatar are the beneficiaries of a vast welfare state. In contrast, non-citizens, who currently make up approximately 80 percent of the population, lack the legal protections, access to wealth, and right to social services enjoyed by citizens. Qatar’s non-citizen population is ethnically, religiously, and linguistically diverse. This sector of the population is roughly 20 percent Arab, 20 percent Indian, 13 percent Nepalese, 10 percent Filipino, 7 percent Pakistani, 5 percent Sri Lankan, and 5 percent other nationalities. High rates of immigration have also distorted Qatar’s gender balance, resulting in a ratio of 200 men to 100 women as of 2004.

Qataris are proud of their culture, traditions, and beliefs, which promote what they see as the traditional Arab and Islamic values of hospitality, generosity, loyalty, connection to family, and respect for elders. These values have survived, even in the face of rapid modernization, widespread globalization, and Qatari citizens’ status as a minority population within their own country. Although values and beliefs vary between individuals, Qataris generally place an emphasis on hierarchies that privilege the old over the young and men over women.

Most Qataris highly value their honor and reputations, which are maintained by upholding social norms, particularly those surrounding interactions between men and women. Men are expected to treat women with respect; women are expected to be modest and chaste.

Many Qataris lament what they see as the culture’s growing focus on material possessions and the increasing popularity of malls, jet-skis, cafes, cars, and television. Some young Qataris express a growing sense of boredom and aimlessness despite (or, perhaps, because of) their wealth, which can remove some of life’s daily challenges. Intergenerational conflict between Qatari children, parents, and grandparents is becoming increasingly common.

Upon gaining its independence in 1971, the state found that Qatar’s small, diverse, and unstable population had few myths, symbols, and traditions that could unite the population and give its citizens a sense of national identity. Today, Qataris use certain symbols, directly promoted by the state, to express their ties to Qatar’s traditions and culture. Drawing upon the country’s history as a seafaring and desert-dwelling society, the key symbols include: the pearl, boating, falconry, the oryx (a desert antelope), camel racing, horse racing, palm trees, and Gulf national dress.

These symbols are seen in popular television shows that depict a romanticized version of traditional Qatari life, such as camel and horse races, sponsored by wealthy Qataris; the dhows (boats) sailing out of Doha’s harbor; weekend camping trips to the desert; and “Bedouin” events in the desert, staged by non-citizen workers. Qataris too young to remember the poverty of pre-oil Qatar are likely to sentimentalize lives of their ancestors.