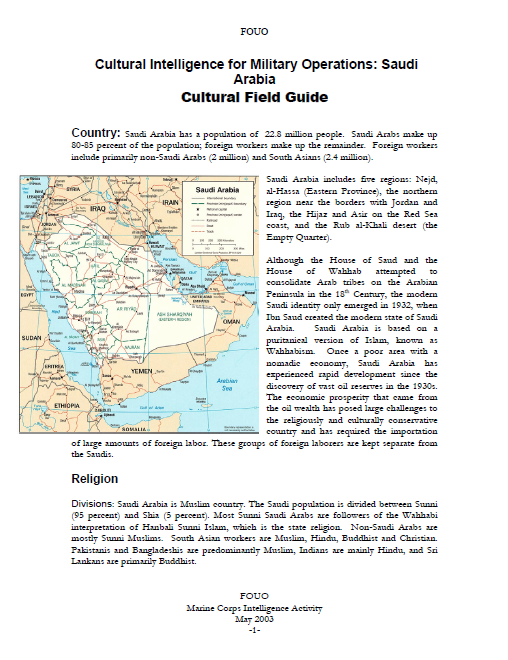 Saudi Arabia includes five regions: Nejd, al-Hassa (Eastern Province), the northern region near the borders with Jordan and Iraq, the Hijaz and Asir on the Red Sea coast, and the Rub al-Khali desert (the Empty Quarter).

Although the House of Saud and the House of Wahhab attempted to consolidate Arab tribes on the Arabian Peninsula in the 18th Century, the modern Saudi identity only emerged in 1932, when Ibn Saud created the modern state of Saudi Arabia. Saudi Arabia is based on a puritanical version of Islam, known as Wahhabism. Once a poor area with a nomadic economy, Saudi Arabia has experienced rapid development since the discovery of vast oil reserves in the 1930s. The economic prosperity that came from the oil wealth has posed large challenges to the religiously and culturally conservative country and has required the importation of large amounts of foreign labor. These groups of foreign laborers are kept separate from the Saudis.

Greetings: Arabs often greet each other with a number of ritual phrases and fixed responses. When a Muslim Arab greets another Muslim, the greeting is: “Peace be upon you” (as-salam alaykum). The other Muslim must then respond, “And upon you be peace” (wa alaykum as-salam). “Salam,” however, is a special greeting for Muslims only. If a non-Muslim greets a Muslim with the greeting “Peace be upon you,” the Muslim is only supposed to respond, “And upon you” (wa alayk). Traditionally, the Muslim was not supposed to initiate the greeting of “salam” to a non-Muslim, as Prophet Muhammad taught that Muslims “should not greet the Jews and Christians before they greet you, and when you meet one of them in the street, force him to go to the narrowest part of it.” The Saudi Arabs continue to teach this hadith (a saying by Prophet Muhammad) in Saudi schools. Saudis will not congratulate non-Muslims on their holidays, such as Christmas, Easter, and any other commemoration that might involve something external to Islam. Saudi Arabs believe that to do so would be to validate the other religion, something that they believe is worse than committing suicide or having illicit sex.

Elaborate greetings and inquiries about health and well-being often take up large amounts of time, but are important in establishing friendly relations. These elaborate greetings originate from Bedouin tradition where the nomadic lifestyle led to frequent encounters with strangers. Arabs will often shake hands every time they meet and every time they depart. Arabs will rise when shaking hands and when an esteemed person enters a room. Handshakes are generally long in length and may involve grasping the elbow. They usually do not possess the same firmness as those of Americans.

Upon entering a room full of people, Arabs will greet those present—especially the elderly—before sitting down. Eye contact is important to Arabs and signals respect to the person greeted. Arabs find public displays of affection between the opposite sex offensive. Arabs typically stand very close when greeting and talking; the concept of personal space in the Western sense is foreign. Hugging and embracing between men is common in the Arab world. Touching noses together three times when greeting is a Bedouin gesture of friendship and respect. Two men kissing each other quickly on the lips when greeting is also an expression of friendship.

Namaskar or Namaste is the most popular form of greeting among Indians. Both palms are placed together and raised below the face. It is a general salutation that is used to both welcome somebody and to bid farewell. Other forms of greeting common among India’s various communities include the Sikh Sat-Sri-akal and the Tamilian Vannakkam.

Handshakes are the common form of greeting between two Pakistani males. Close friends and relatives may embrace. Women may greet each other with a kiss or an embrace.

Ayubowan, which means ‘May you live long,’ is the customary Sri Lankan greeting. Palms held close together against the chest denotes welcome, goodbye, respect, devotion, or loyalty. Gifts should be given or received with both hands.

When greeting non-Muslims, Bangladeshis use the Indian Namaskar greeting. When greeting fellow Muslims, they use Asalaam walaikhum, which means ‘Peace be upon you.’

Gestures/Hand Signs: Arabs, like most people, use gestures and body movements to communicate. It is said that “To tie an Arab’s hands while he is speaking is tantamount to tying his tongue.” However, Arab gestures differ a great deal from American ones.

• Placing the right hand or its forefinger on the tip of the nose, on the right lower eyelid, on top of the head, or on the mustache or beard means “It’s in front of me,” “I see it,” or, “It’s my obligation.”
• Placing the palm of the right hand on the chest immediately after shaking hands with another man shows respect or thanks.
• Touching the tips of the right fingertips to the forehead while bowing the head slightly also connotes respect.
• Holding the fingers in a pear shaped configuration with the tips pointing up at about waist level and moving the hand slightly up and down signals “Be patient” or “Be careful.”
• Flicking the right thumbnail on front teeth can mean “I have no money.”
• Biting the right forefinger, which has been placed sideways in the mouth, is an expression of regret.
• The “OK” sign, if shaken at another person, symbolizes the evil eye.
• Hitting the right fist into the open palm of the left hand indicates obscenity or contempt.
• Placing the palm of the right hand on the chest, bowing the head a little and closing one’s eyes means “Thank you” (in the name of Allah).
• A quick snap of the head upwards with an accompanying click of the tongue signals, “No” or “Perhaps.”
• Flipping the hand near the mouth and simultaneously making a clicking sound with the tongue and teeth indicates “Don’t worry.”
• Holding the right hand in front of the face with the back facing forward and then flipping the hand so that the palm is up means that the person asked for is not present.
• Placing a half closed hand in front of the stomach, and then turning it slightly connotes that the person to whom the gesture is made is a liar.
• Touching the tip of the right forefinger on the tongue and then placing it on the tip of the nose, means “Hurry up.”
• Pointing fingers or writing utensils at anyone is considered threatening and is reserved for animals.

United States: The overall attitude of Saudis toward the United States is positive, but tempered by ambivalence, with a small portion of the population harboring feelings of strong dislike. While Saudis appreciate U.S. assistance and support, Saudi dependence on the United States is demeaning because it reveals Saudi weakness and lack of self-reliance.

Other Ethnic Groups: South Asians are seen as a group apart, who have few connections to the Saudi Arabs, though most of them are Muslim. Non-Saudi Arabs are seen as having certain cultural characteristics that are shared with Saudis, such as Arabic language and Islamic faith, but they are still set apart from the Saudis because they are not Wahhabis and are not members of the Saudi national group.

Yemen: Saudi relations with Yemen have been problematic over time, but have experienced improvement since September 2001. The Asir province of Saudi Arabia is culturally similar to northern Yemen. Both sides of the border near the Asir province share problems of smuggling, crime and other security issues that complicate monitoring of the border. The history of disputes between the two countries is fading, but the Saudis still look at Yemen as a place where lawlessness and religious extremism are allowed to flourish, and which may pose a danger to Saudi stability.

Gulf States: Kuwait, Qatar, United Arab Emirates, Oman: Relations with the Gulf states are generally positive. However, many Saudis disagree with the numerous liberal reforms that are being implemented in these countries and resent the pressure that such reforms are putting on Saudi Arabia to make similar changes.

Iraq: Saudi-Iraqi relations turned sharply negative with the Iraqi invasion of Kuwait. Saudis felt betrayed by the invasion because the kingdom had provided billions of dollars to Iraq during the Iran-Iraq war in the 1980s. Saudis feel an affinity for Iraqis because they are fellow Muslims and Arabs, but the two states do not share a deep relationship.

Iran: The Saudi royal family and the Wahhabi population look at Iran with wariness and trepidation. At its founding, the Saudis viewed the Islamic Republic of Iran as a threat to internal Saudi security because of Iranian propaganda that targeted the Saudi Shia population in the oil-rich Eastern Province. As the relationship has moderated, the Saudi view of Iran remains suspicious, but less acutely fearful.