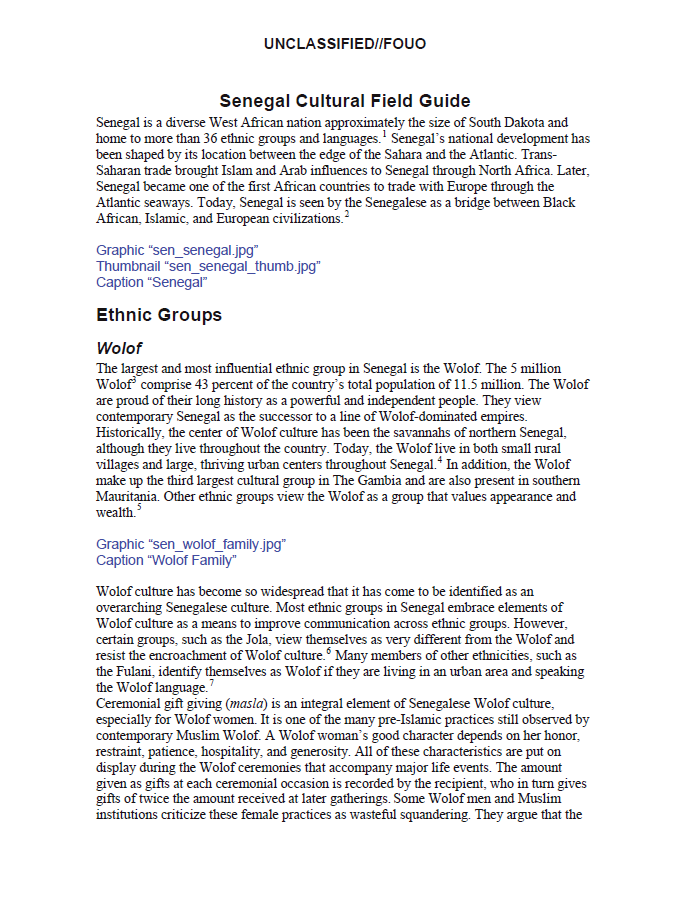 Senegal is a diverse West African nation approximately the size of South Dakota and home to more than 36 ethnic groups and languages. Senegal’s national development has been shaped by its location between the edge of the Sahara and the Atlantic. Trans-Saharan trade brought Islam and Arab influences to Senegal through North Africa. Later, Senegal became one of the first African countries to trade with Europe through the Atlantic seaways. Today, Senegal is seen by the Senegalese as a bridge between Black African, Islamic, and European civilizations.

In contemporary Senegal, nearly all Muslim Senegalese belong to a Sufi brotherhood and follow a marabout, living saints associated with a specific Sufi brotherhood who are believed to have supernatural powers. They serve as teachers and intermediaries between brotherhood members and god. The Senegalese visit their marabouts for guidance and advice, particularly before making important decisions, such as choosing whom to marry. Senegalese women, though they cannot be official members, are usually affiliated with the brotherhoods of their fathers or husbands. Like men, they consult with their marabouts and give generously to the brotherhoods and their charities. The brotherhoods are traditionally associated with certain ethnicities; however, contemporary brotherhoods are integrated in terms of both ethnicity and caste. The Tijaniyya remains the largest brotherhood in Senegal and it is traditionally associated with the Fulani. The Mouride brotherhood’s membership is almost entirely Wolof, and increasing numbers of Wolof are leaving the Tijaniyya to join the Mourides. Most members of the Qadiriyya brotherhood live near the Mauritanian border or among the Moors of Senegal. While the Baye Fall, a subgroup of the Mourides, stand out for their numerous unorthodox practices (such as shunning prayer and fasting in favor of hard work), there are few ideological differences between the Mourides, the Qadiriyya, and the Tijaniyya. The main differences among the three brotherhoods are their unique forms of prayer and ritual observance.

Mouride marabout Sheik Amadou Bamba is by far the most popular and revered figure in Senegal. The Senegalese view Bamba as a saint, poet, and hero of the resistance to French colonialism. He symbolizes Muslim piety, selflessness, and peaceful resistance. His image as a Sufi saint is painted on buildings, automobiles, and necklaces, and has come to represent all of Senegal. The image is based on the only known photograph of Bamba, which shows him standing in front of a wooden wall wearing white robes, a white turban, and a white scarf across the lower half of his face.

Family is another significant aspect of Senegalese culture and identity. Senegalese identity is strongly linked to shared ancestors and familial relations. Most Senegalese view getting married as essential to becoming a complete, mature adult. Polygamy with up to four wives is still practiced among some Muslim Senegalese, per Sunni shar’ia (Islamic law). However, since Sunni shar’ia dictates that a man must support all of his wives and children equally, in practice polygamy is rare. Polygamy is practiced more often in rural areas where multiple wives help run farms and manage trade and small businesses than in urban centers. Multiple wives are seen as a status symbol of wealth and power. Interethnic marriage is acceptable in Senegal; however, some ethnic groups have more reservations than others. Fulani believe it is acceptable to marry a member of any ethnic group, provided they are Muslims. The Serer believe that a wife will not truly understand her Serer husband if she is not herself a Serer.