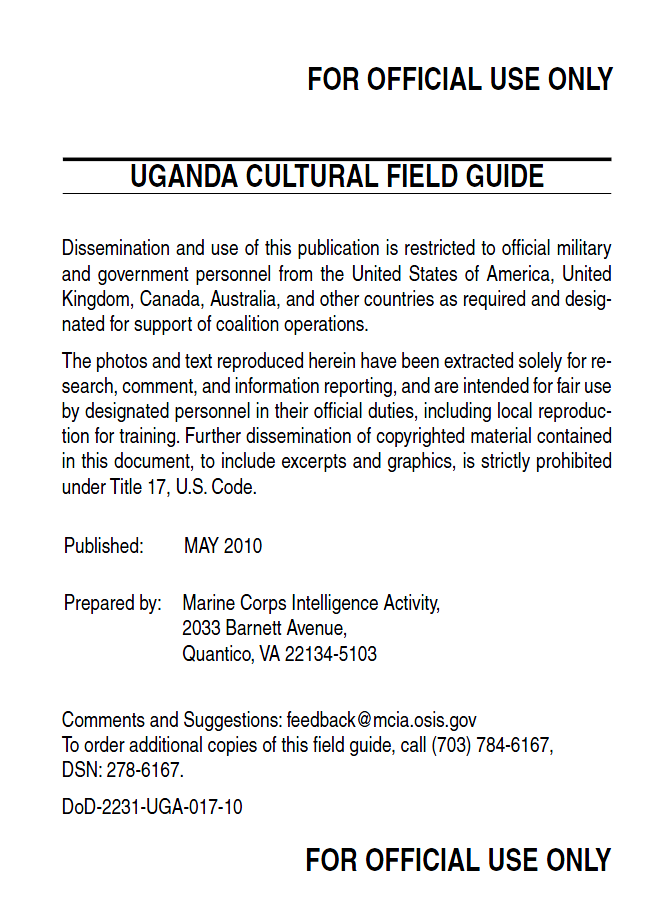 The Uganda Cultural Field Guide is designed to provide deploying military personnel an overview of Uganda’s cultural terrain. In this field guide, Uganda’s cultural history has been synopsized to capture the more significant aspects of the country’s cultural environment, with emphasis on factors having the greatest potential to impact operations.

The field guide presents background information to show the Uganda mind-set through its history, language, and religion. It also contains practical sections on lifestyle, customs and habits. For those seeking more extensive information, MCIA produces a series of cultural intelligence studies on Uganda that explore the dynamics of Uganda culture at a deeper level.

As in most African countries, the pre-recorded history of Uganda is difficult to establish. With no written records, the origin and classification of the modern people is often the subject of academic debate.

The first people in the area defined today as Uganda are believed to have arrived 3,000 years ago from the region of modern day Democratic Republic of Congo (DRoC). These inhabitants were hunter-gatherers, known as Bambuti or Batwa. They were slightly built and similar in appearance to the Khoisan of southern Africa and the pygmoid people, who lived in the rainforests near the Congolese border.

The second migration of humans into the region reached the shores of Lake Victoria in approximately 200 B.C.

Western influences are evident in Uganda culture. These influences are more pronounced in urban areas, such as Kampala; rural Uganda is more traditional. Urban areas have more access to foreign media, and the urban population generally has a higher education than rural populations. Ugandans in Kampala may dress and act differently than they would when visiting relatives in a rural setting. This double standard is kept out of respect. Do not be surprised to see a friend dress or behave differently in these different situations.

Uganda’s population has experienced acquired immune deficiency syndrome/human immunodeficiency virus (AIDS/HIV) at a high rate of infection. The disease was first recognized in Uganda in 1982, since then more than a million people have died and more than 2 million children have been orphaned. It had been known previously as “slimming disease.” The infection rate reached 15 percent in the 1990s; today it is 5.4 percent. The reduction in infection rate is attributed to deaths from AIDS as well as prevention of new infections. The government embraced an education program based on abstinence, being faithful, and using condoms; it was called the ABCs of AIDS prevention. The presence of AIDS/HIV has changed Ugandan society. There are fewer polygamous marriages, and the custom of wife inheritance is no longer practiced. Wife inheritance occurred when a man died; his wife would be inherited by his brother. The prospect of inheriting a wife with AIDS was not seen as advantageous.

Uganda like many countries around the world is making transitions in gender roles; however, it is a male-dominated society. Women are primarily responsible for child care and subsistence agriculture, while also contributing to cash crop agriculture.

Women have fewer economic opportunities than men. Men have authority in the family and are responsible for clothing, school fees, farming, and financial support. Household tasks are divided among women and older girls who also weed gardens, help with the harvest, and sell produce in the market. Women are economically dependent on male relatives (husband, father, or brother) and have little influence in family and community matters.

The Museveni administration has encouraged women to participate in politics. Each of Uganda’s districts has a female Member of Parliament, and one-third of all local council seats are reserved for women. As a result, women make up 24 percent of the legislature. Emancipation and suffrage occur at 18 years of age regardless of gender.

Treatment of men and women under the law is uneven. However, Uganda’s law regarding men and women committing adulterous acts was challenged in 2007. The former law allowed married men to carry on relationships with single women, but considered it illegal for married women to have a relationship with single men. The law was changed, and extra-marital affairs are now legal for men and women. Women are considered subordinate to men despite their substantial economic and social responsibilities.