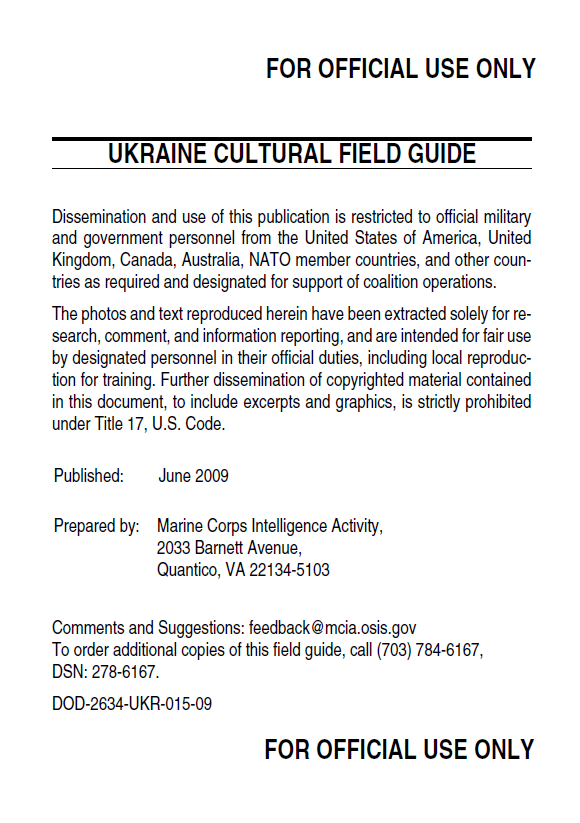 Ukraine is positioned between Eurasia and Europe, and the region has been influenced by many major civilizations. Ukraine, whose name means “borderland,” has lived under foreign powers for most of its existence. This is most recently evidenced by the creation of the Ukrainian Soviet Socialist Republic, controlled by the centralized establishment in Moscow under the communist regime. Even today the capital, Kiev, struggles internally between Moscow and the West, forcing Ukrainians to more closely identify with either their own cultural brethren or a new, more independent direction for the country.

The State and Identity Formation

Historic lack of a Ukraine centralized state and continuous conquests of territory shaped identity. The bombardment of conquerors forced Ukrainians to be resilient and uphold their identity as a means of survival, preserving their language and religion despite foreign attempts to suppress them. Scholars debate when a distinct Ukrainian identity emerged, but Ukrainians most often trace their roots to the Polonians living in western Ukraine, Poland, and Belarus around the 6th century.

The Kievan Rus era also shaped cultural identity, as it was a major civilization of Slavic and Orthodox history. The Orthodox Church, Cossacks, and minority intelligentsia of the 18th to 20th centuries were influential in propagating a Ukrainian identity.

The state did not play a large role in identity formation until Ukraine was a Soviet Socialist Republic. While Muscovites and Catherine the Great brought Russian culture to Ukraine during the 18th century, it was not until Ukraine came under the Soviet Union that their identity was brutally suppressed. The Soviet State controlled all aspects of life and strongly encouraged the sentiments of “brotherhood” and “Sovietness.” The Soviets suppressed Ukraine’s language, literature, and religion; broke its economic backbone; and reinterpreted history to weaken any ideas of Ukraine nationhood.

From 1990 to 2004, Ukraine, like many post-Soviet states, had  “virtual politics,” where elections were held, though later delegitimized by voter intimidation, limited press coverage of all the candidates, fraudulent ballot tallying, and candidate intimidation. Burdened with decades of propaganda, people found trusting governing institutions difficult. Politicians undermined and intimidated the opposition rather than engage in debate.

Progress also was marred by politicians who organized in ways that guaranteed their continued stronghold of power. Resistance movements emerged. Some were inspired by the tolerant communism of Alexander Dubcek in Czechoslovakia in the 1960s; others were inspired by nationalist efforts from the Lviv region such as the Rukh movement, which arose in 1988 as a unique noncommunist voice in Soviet Ukraine.

Today, as democracy and civil society develop in a post-Soviet Ukraine, the political culture is transitioning as well. Older generations find it difficult to adapt to the open society and their new role in the political process. Transforming the political culture of a society after decades of suppression is challenging. Moving beyond the memory of life in the USSR proves hard because many former nomenklatura, top echelons of the former Soviet Union, hold positions in government and business in newly independent Ukraine.

The Orange Revolution signaled a shift, and progress is being made. Transparency, free press, and political participation are on the rise. The 2004 Orange Revolution had tremendous implications for Ukraine’s political culture. Ukrainians across all sectors of society, not only the educated elite or western Ukrainians, desired a new direction for their country. After decades of oppression, people changed the political process. Such a successful popular revolt would not have been possible previously. However, few reforms were implemented, corruption ensued, and deep clashes between Tymoshenko and Yushchenko marred hopes of progress.

Many Ukrainians have become discouraged by the political squabbling and economic decline since the Orange Revolution. Nonetheless, political culture has changed positively. The media is freer, journalists do not fear for their lives, elections are fair, and a much larger proportion of the population participates in political processes.

The Central Committee of the Soviet Union kept a tight rein on media. Speaking against the Party or its policies was strictly forbidden, and all media outlets were owned and operated by the state. U.S. broadcasting companies, such as Voice of America and Radio Free Europe/Radio Liberty, were examples of the few free media outlets in the Soviet Union.

Even after Ukraine gained its independence, the media was controlled by Kiev and the corrupt oligarchs. Harassment and kidnapping of journalists was common. The most famous case involved Georgiy Gongadze in 2001. Gongadze founded an independent newspaper called Ukrayinska Pravda. He was critical of the cronyism rampant throughout government and business. The journalist was abducted and found decapitated outside Kiev. The case became more prominent after evidence emerged indicating that Ukraine’s president, Leonid Kuchma, ordered the journalist to be “taken care of,” along with many other dissidents. Since the Orange Revolution, improvements to the system have been visible. The media has been deemed largely free and independent, and there are many additional news outlets, compared to the scarcity of preceding years.

Ukraine’s military mirrors the deeply rooted nationalism of the civilian population. The Ministry of Defense is undergoing serious reforms to decrease the size of the military and to establish more mobile and better trained forces. Peacekeeping and counterterrorism are the main missions, and the Ministry of Defense goal is to have a fully professional armed forces by 2011.

Morale can be low among the armed services. The defense budget crisis, due to political squabbling in Kiev and the poor economy, delayed implementation of necessary reforms. Much of the equipment is worn, and training techniques are from the Soviet era.

The Ukraine Armed Forces endorses NATO accession and participates in multinational exercises. The Ministry of Defense and servicemen recognize the significance of these exercises and value training with international forces, particularly the U.S. military.

Immediate and extended family are highly valued in Ukraine. The average family has two children, and both parents work outside the home. Elderly parents often live with their adult children and provide child care. Women perform household chores, and grandmothers living in the home are significant in decision making for the household. It is common for parents to support childrenthrough their adulthood and even marriage. In turn, children step up when their aging parents can no longer support themselves. The elderly are treated with love and respect. Passers-by in the street generally do not smile or acknowledge one another; however, once acquaintances are met, Ukrainians are hospitable people.

Individualism in Ukraine, though formerly discouraged during the Soviet era, is highly valued, as are friendships. Ukrainians have a strong sense of nationalism and cultural identity, particularly after their long struggle for independence. They take pride in their national heritage and are optimistic despite economic hardship, environmental problems, and ongoing social change. Work patterns, for example, are shifting from the old Soviet style to private enterprise, individual labor, and personal initiative.