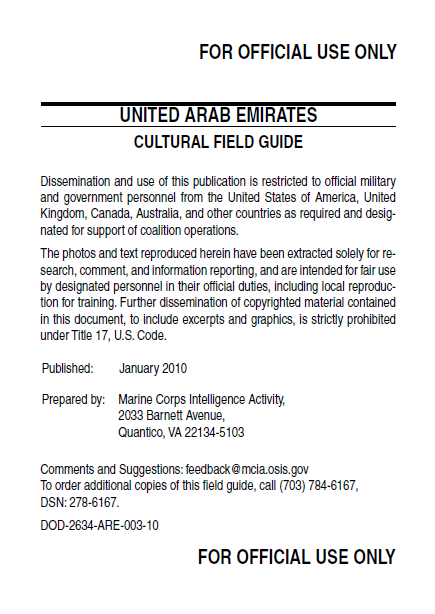 The United Arab Emirates Cultural Field Guide is designed to provide deploying military personnel an overview of UAE’s cultural terrain. In this field guide, UAE’s cultural history has been synopsized to capture the more significant aspects of the country’s cultural environment, with emphasis on factors having the greatest potential to impact operations.

The field guide presents background information to show the UAE mind-set through its history, language, and religion. It also contains practical sections on lifestyle, customs and habits. For those seeking more extensive information, MCIA produces a series of cultural intelligence studies on UAE that explore the dynamics of UAE culture at a deeper level.

The United Arab Emirates (UAE) is a federation of seven emirates located on the Arabian Peninsula. It borders the Arabian Gulf to the north and northwest, Oman and the Indian Ocean to the east, Saudi Arabia to the west and southwest, and Qatar to the northwest.It encompasses total of 83,600 square kilometers (32,378 square miles), making it roughly the size of Maine. Although much of the UAE is desert, it does have significant geographic variation including the Sabkah sandy flats along the coastline and the Hajar Mountains in the eastern peninsula. UAE’s climate is among the hottest and driest in the world, though the mountains receive limited rainfall.

Family and tribal relationships are among the most significant sources of identity for Emiratis. Kinship ties constitute the basic foundations of society and culture and an individual’s social status and position in society is largely derived from these ties. The significance of kinship ties has made social mobility fairly difficult in UAE society.

Tribal ties remain significant in Emirati society, which continues to be shaped by a tribal structure. Tribes are composed of groups of individuals who trace their lineage to a common ancestor. Most tribes in the UAE have thousands of members and multiple branches. The tribes continuing significance is evidenced in the correlation between tribes and the emirate’s political structure. Each emirate is governed by the head of the largest or most powerful local tribe. Traditional tribal decision-making mechanisms, such as negotiation and consultation, remain significant means of contemporary political discourse.

The ruling tribes of each emirate have significant authority in UAE society. The Bani Yas, which has branches that rule Abu Dhabi and Dubai, is the most powerful tribal confederation. Abu Dhabi is more tribally complex than Dubai, where the main group, the Al Bu Falasa branch of the Bani Yas, is dominant and includes the ruling al-Maktoum family. In Abu Dhabi, the ruling family, the al-Nahyan, comes from the Al Bu Falah branch of the Bani Yas and has formed strategic alliances with other powerful branches of the Bani Yas and other tribes. Among these are the al-Sudan, Mahasir, and the al-Dhwahir. Tribes, or branches of tribes, are often very different based on their location, relative power, and primary economic pursuits. Although the al-Maktoum and al-Nahyan come from the same tribe, they are very different in orientation. The al-Nahyan have a strong connection to the desert and Bedouin life, while the al-Maktoum are urban and mercantile in their outlook.

The UAE has had a long history as a center for illegal economic activities including smuggling, human trafficking, money laundering, and the arms trade. This is particularly true in Dubai, whose free-market economy places few restrictions on commercial and financial transactions. The massive numbers of foreigners moving across the country’s borders and its relatively free financial market have made it a center for illegal economic activity. Money laundering has been particularly difficult for the UAE to control. In the 1990s, the Bank of Credit and Commerce International (BCCI) scandal revealed the depth of the issue. The BBCI was the world’s fifth largest privately owned bank when accusations of money laundering surfaced. Even the ruler of Abu Dhabi, Sheikh Zayed was implicated in the scandal and reportedly billions in investments were lost. Recent accusations that the UAE is rife with terror-affiliated money-laundering operations have prompted the UAE to enforce stricter financial measures.

Human trafficking is another serious issue in the UAE. Once a key stopover for slave traders, the UAE has continued to be a major destination for human trafficking. Accusations that the UAE had used trafficked Pakistani children as camel jockeys prompted the government to ban human jockeys and replace them with mechanical robot jockeys. The sex trade is another booming business in the UAE, particularly Dubai. Although some of the women arrive willingly to work as prostitutes, large numbers are tricked into prostitution after being told they would fill other jobs and then having their passports confiscated by their sponsors once they arrive.