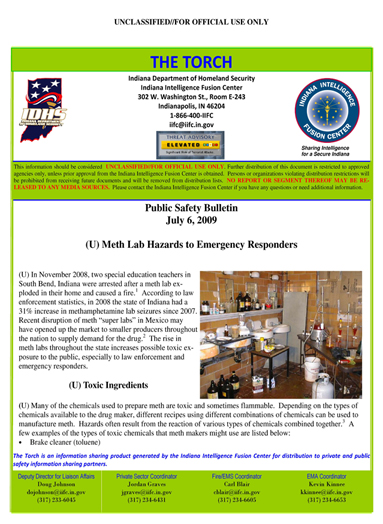 (U) In November 2008, two special education teachers in South Bend, Indiana were arrested after a meth lab exploded in their home and caused a fire. According to law enforcement statistics, in 2008 the state of Indiana had a 31% increase in methamphetamine lab seizures since 2007. Recent disruption of meth “super labs” in Mexico may have opened up the market to smaller producers throughout the nation to supply demand for the drug. The rise in meth labs throughout the state increases possible toxic exposure to the public, especially to law enforcement and emergency responders.

(U) Risks to Emergency Responders from Meth Labs

(U) Explosions— The most immediate danger is the risk of combustion from the mixture of gases emitted by cooking with toxic chemicals. If a clandestine lab is uncovered in active production mode, only trained personnel should enter and contain the facility. Do not attempt to stop the chemical reaction. Turning an electrical device on or off or switching on a flashlight could spark an explosion. Evacuate the immediate area and if the lab is very large, the surrounding neighborhood may need to be evacuated.

(U) Chemical Toxicity—In the state of Washington, a suspect with chemical burns from a meth explosion was treated by three hospital employees. Shortly after, the three employees began vomiting from exposure to the chemical residue on the suspect. Three EMTs and two law enforcement personnel also became sick from exposure to the suspect. When first responders unexpectedly come across an active meth lab they can be susceptible to acute chemical exposure which can cause lung damage and burns to the body.6 In statistics compiled on meth lab incidents in five states, 51% of injuries occurring at meth labs occurred to first responders and 69.9% of those injuries occurred to police officers responding to the scene.

(U) Anti-personnel devices—Meth makers have been known to rig clandestine lab sites to ambush law enforcement or other intruders. Anti-personnel devices can also give the lab workers advance warning of an intruder to help give them time to escape. The devices can be rigged to cause death or injury to first responders. A few examples of hidden devices rigged by meth makers are listed below:

(U//FOUO) Trends show expanding numbers of meth labs throughout the state of Indiana, especially in rural sectors. In rural, secluded areas of the state, meth makers find it easier to conceal labs and screen activities from observers. In the case of the two teachers in South Bend, the commonly held profile of meth makers as loners with poor educational background and low income may need to be reassessed by local officials who are on the alert for meth labs in their localities. Because of the spillover of toxic waste and contamination by meth labs, local officials might consider reviewing policies on toxic waste cleanup in the community. Also, consider implementing standards for cleanup and decontamination of buildings that housed clandestine meth labs. Because of the rise in lab seizures throughout the state, it is critical for emergency responders to be trained on the hazards that can be encountered in meth labs so that if a clandestine lab is uncovered, the emergency responders will know how to protect themselves and the surrounding community from injury.