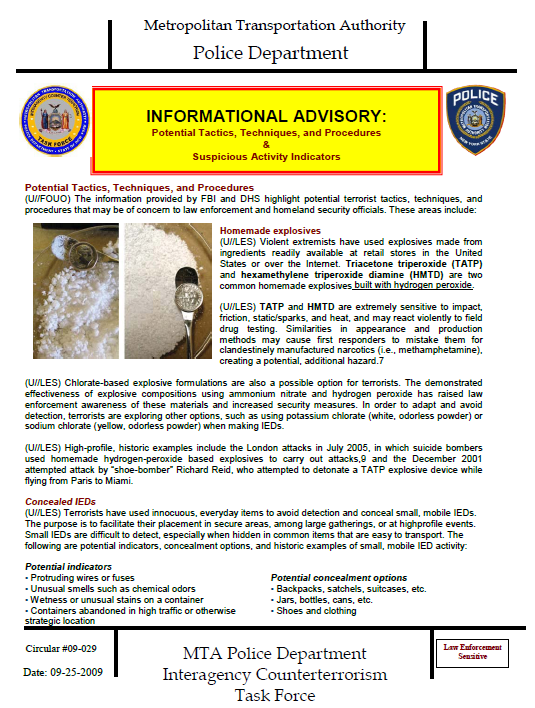 (U//FOUO) The information provided by FBI and DHS highlight potential terrorist tactics, techniques, and procedures that may be of concern to law enforcement and homeland security officials. These areas include:

(U//LES) Violent extremists have used explosives made from ingredients readily available at retail stores in the United States or over the Internet. Triacetone triperoxide (TATP) and hexamethylene triperoxide diamine (HMTD) are two common homemade explosives built with hydrogen peroxide.

(U//LES) TATP and HMTD are extremely sensitive to impact, friction, static/sparks, and heat, and may react violently to field drug testing. Similarities in appearance and production methods may cause first responders to mistake them for clandestinely manufactured narcotics (i.e., methamphetamine), creating a potential, additional hazard.

(U//LES) High-profile, historic examples include the London attacks in July 2005, in which suicide bombers used homemade hydrogen-peroxide based explosives to carry out attacks,9 and the December 2001 attempted attack by “shoe-bomber” Richard Reid, who attempted to detonate a TATP explosive device while flying from Paris to Miami. Concealed IEDs

(U//LES) Terrorists have used innocuous, everyday items to avoid detection and conceal small, mobile IEDs. The purpose is to facilitate their placement in secure areas, among large gatherings, or at highprofile events. Small IEDs are difficult to detect, especially when hidden in common items that are easy to transport. The following are potential indicators, concealment options, and historic examples of small, mobile IED activity:

(U//LES) Suspicious activity is not always actionable, but when placed in context with additional behaviors or with other information, may indicate a potential threat. The following are some examples of potential suspicious activity:

• Individuals who have burn marks on their hands, arms, or face, or who have stains on clothing
• Foul odors or caustic fumes coming from a room or building
• Damage to ceilings and walls – such as corrosion of metal surfaces or structural damage – and paint discoloration from harsh chemical fumes
• Strong chemical odors emanating from sewers and drainage ditches
• Large industrial fans or multiple fans in windows
• Dead vegetation in the surrounding area
• Presence of metal or plastic drums for storing explosives
• Machinery – such as gas burners or mixers – for processing raw materials
• Discoloration of pavement, soil, or structure
• Refrigerators or coolers used to store volatile chemicals and finished products
• Individuals requesting or purchasing information (such as textbooks) on using peroxide
• Large-quantity purchases of hydrogen peroxide (i.e., more than a gallon)