The following is excerpted from Carroll Quigley’s work The Anglo-American Establishment published in 1981. 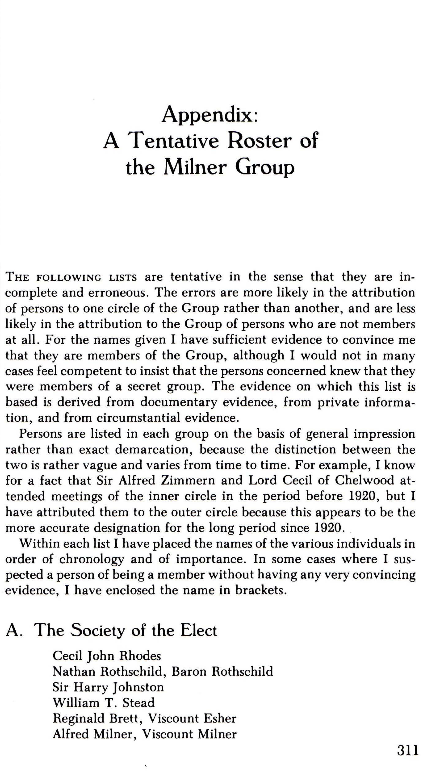 A Tentative Roster of the Milner Group

THE FOLLOWING LISTS are tentative in the sense that they are incomplete and erroneous. The errors are more likely in the attribution of persons to one circle of the Group rather than another, and are less likely in the attribution to the Group of persons who are not members at all. For the names given I have sufficient evidence to convince me that they are members of the Group, although I would not in many cases feel competent to insist that the persons concerned knew that they were members of a secret group. The evidence on which this list is based is derived from documentary evidence, from private information, and from circumstantial evidence.

Persons are listed in each group on the basis of general impression rather than exact demarcation, because the distinction between the two is rather vague and varies from time to time. For example, I know for a fact that Sir Alfred Zimmern and Lord Cecil of Chelwood attended meetings of the inner circle in the period before 1920, but I have attributed them to the outer circle because this appears to be the more accurate designation for the long period since 1920.  Within each list I have placed the names of the various individuals in order of chronology and of importance. In some cases where I suspected a person of being a member without having any very convincing evidence, I have enclosed the name in brackets.

A. The Society of the Elect

3. Members in other countries