Mortuary Affairs – Is USNORTHCOM and the Department of Homeland Security Positioned for Contaminated Mass Fatality Management? 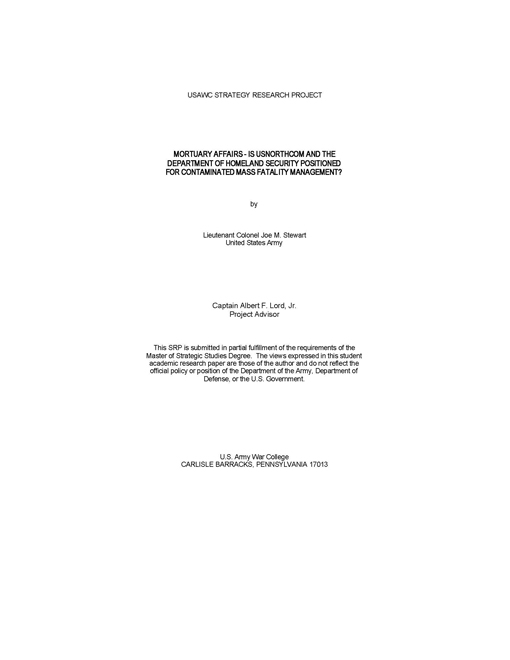 The Global War on Terrorism has emphasized homeland defense and security as a priority for the Nation. U.S. Northern command (USNORTHCOM) recently attained its initial operational capability as the Department of Defense executive agent for Homeland Defense. Terrorists have demonstrated the ability and willingness to obtain and use Weapons of Mass destruction to further their goals. An unfortunate reality of such employment is the creation of contaminated remains. The recovery, identification, disposition of remains to include their decontamination falls within the scope of Mortuary Affairs. This is a hugely sensitive issue. As USNORTHCOM and the Department of Homeland Security grapple with their transition as lead Homeland Defense and Homeland Security agencies; a seam in policy and capabilities may exist. USNORTHCOM’s ability to provide support to meet surge requirements for decontaminating and processing human remains is not articulated or properly sourced. This paper looks at the threat posed within the Nation’s borders that requires a USNORTHCOM and a Department of Homeland Security synchronized response. Policies, directives, programs that highlight current government capability to handle domestic contaminated mortuary affairs incidents and potential seams will be identified. Recommendations for potential policy, training requirements, and force structure will be discussed.

The national dialog about the use of weapons of mass destruction (WMD) by terrorists has caused Americans to examine the nation’s consequence management response readiness. Though the management of remains does not elicit the same hope and optimism as does the caring for casualties and saving lives, how we care for the dead has come to reflect our value and compassion for the living and respect for the deceased. It is clear that no one wants to consider the impact of having to deal with the numerous remains left by a catastrophic incident, but the truth is it may be one of the most demanding responses we are left with after a man-made or naturally occurring event.
—The National Mass Fatality Strategic Concept

President George W. Bush created the DHS to correct perceived inadequacies in the federal government’s structure highlighted by the terrorist attacks of September 11, 2001. America was violently reminded of the fact that the science and technological advances that have effectively shrunk the global community in economic, informational, and travel arenas have also enabled America’s enemies to more effectively execute acts of violence within the nation. DHS organized 22 domestic entities with critical homeland security missions under a single federal department for the first time.

DHS is the lead federal agency for implementing the National Strategy for Homeland Security. It has the responsibility to “streamline relations with the federal government for our state and local governments, private sector, and the American people.” Towards this end DHS produced an initial National Response Plan with a goal of establishing a new model for to establish an integrated all hazard response plan.

“Incident management cannot be event driven. The new paradigm must be approached through increased awareness, preventive measures, and robust preparedness. Preventing an incident from ever occurring reaps far more dividends than simply reducing the costs of post-incident response and recovery. Consequently, in this new Plan, awareness, prevention, and preparedness efforts will be given similar emphasis to that traditionally afforded to the response and recovery domains. To make the response and recovery aspects of our nation’s readiness system as efficient and effective as possible, a cooperative national effort is essential, one with a unified approach to incident management and with the ultimate goal of a significant reduction in our nation’s vulnerability over time. Successful implementation of this new paradigm is critically dependent on information-sharing, consistent and timely communication between all institutions that are party to the National Response Plan, and a common planning framework that captures valuable best practices across the spectrum of contingencies.”

Regardless of how adroitly the DHS accomplishes this mission, the potential for a catastrophic incident that produces appreciable casualties will always be present. Also, the DHS’ phrasing indicates a flawed assumption that response and recovery policies were well along the acceptable path of integration and deconfliction. This is simply not the case. Fatality management has always been a sensitive issue. Psychologically we prefer to focus on the effort to recover potential survivors and the capabilities and means required to accomplish this objective. Fatality management urgency is rightly secondary, but no less critical a mission. The political, religious and operational constraints associated with the proper search, recovery, identification, and disposition of remains are a complex problem. If the source of incident is CBRNE in nature then the problem is further compounded.

Each state is unique in its composition of medical examiners or coroners; however, most states hold them legally responsible for operations and procedures associated with fatality management. State statutes concerning disposition of remains are neither uniform nor intuitive. This presents a significant problem in synchronizing mass fatality management as the system is fragmented. Many states do not currently have any specific statues to address treatment of contaminated remains. Whether this is an oversight or intentional omission is not known. An argument for oversight is the general lack of scientific specific data involving the decomposition of contaminated remains.

The Federal Emergency Management Agency, now subordinate to DHS, is still a key player in coordinating federal assistance. The Federal Emergency Management Agency (FEMA) produces The Federal Response Plan (FRP), current as of January 2003, which allocates federal assistance along 12 functional lines. The intent of this plan is to facilitate the implementation of the Robert T. Stafford Disaster Relief and Emergency Assistance Act as well as coordinate augmentation to overwhelmed state and local governments.16 This is a key point as FEMA brings the most desired resource to the catastrophe, access to federal resources. While volunteers may donate time and some services, the costs of feeding, transportation, consumable replacement, etc., quickly overwhelm the local/state government’s associated capability.

The Department of Defense established USNORTHCOM in October 2002 to consolidate under a single unified command homeland defense and civil support missions that were previously executed by other military organizations. Its primary mission is to conduct homeland defense operations to deter, prevent, and defeat threats and aggression aimed at the United States, its territories, and interests within the assigned area of responsibility. Its secondary mission is to provide military assistance to civil authorities including consequence management operations as directed by the President or Secretary of Defense. Regardless of which mission USNORTHCOM is executing, they must plan for potential situations where they must provide military mortuary affairs capability to accomplish contaminated remains processing. A CBRNE catastrophic event occurring on a United States Department of Defense installation is a homeland defense issue. Such events are likely to produce appreciable contaminated casualties that will require decisions to be made concerning interim burial and decontamination. If this is a deliberate event, such as a terrorist attack, the lead federal agencyis the Department of Justice/Federal Bureau of Investigation. This is due to the criminal nature of the event and the need to preserve evidence. The base commander retains overall command of the installation and may receive assistance from local and state authorities through mutual aid agreements (MAAs).

USNORTHCOM plans, organizes, and executes homeland defense and civil support missions, but has few permanently assigned forces. The command will be assigned forces whenever necessary to execute missions as ordered by the President.30 In October 1999, Joint Task Force Civil Support (JTF-CS) was established. Its mission is “to manage military assets in civil disasters and to establish command of designated Department of Defense forces. JTF-CS focuses on chemical, biological, radiological, nuclear, or explosive (CBRNE) incidents or accidents, and will deploy a command and control element to support the Lead Federal Agency. Management of human remains is one of JTF-CS’ primary tasks when called upon to coordinate military assets in a WMD incident.” JTF-CS has no permanently assigned forces beyond their headquarters. Like USNORTHCOM, the command will be assigned forces as required. The Department of Defense mortuary affairs assets to available to JTF-CS are limited, however. Mr. John Nesler, JTF-CS Senior Planner, estimates that approximately 900-1000 skilled mortuary affairs people exist within the Department of Defense structure. They include three U.S. Army Mortuary Affairs (MA) Companies, the U.S. Air Force Dover Port Mortuary, the Armed Forces Medical Examiners Office, the Armed Forces Institute of Pathology, the Air Force Forensic Dental, and as a last resort the. U.S. Marine Corps Chemical Biological Incident Response Force (CBIRF) due to their limited personnel decontamination capability.  JTF-CS most versatile assets for mortuary affairs are the U.S. Army MA companies. One company, the 54th Quartermaster (QM) Company, exists in the active force structure and is based in Fort Lee, Virginia. The remaining MA companies, the 311 th and 246th QM Companies, are reserve units located in Puerto Rico.

The companies based on type are configured to establish mortuary affairs collection points (MACPs), personal effects depot, and theater mortuary evacuation points. One MACP has the capability to process 20 remains in a 12 hour period. The 54th QM Company has the capability to establish 20 MACPs and is therefore capable of processing 400 uncontaminated remains per day. The 311th QM Company is similarly organized and can also process 400 uncontaminated remains per day. The 246 th QM Company is organized differently and can only establish five MACPs and process 60 uncontaminated remains. Each unit is also capable of establishing and operating a Mortuary Affairs Decontamination Collection Point (MADCP). I will discuss MADCP operations as a part of decontamination.