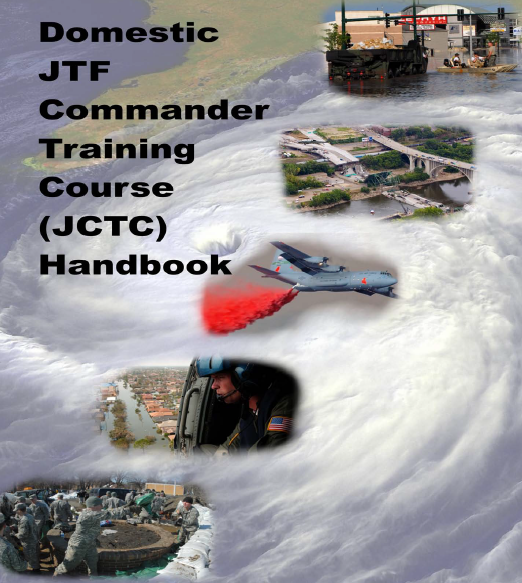 Preparing Guardsmen to become effective Joint Task Force Commanders (CJTFs) is a critical first step in securing the United States from attack through an active layered defense and responding to a wide range of challenging incidents. Initially, the National Guard Bureau (NGB) designed this course to provide potential CJTFs the knowledge and ability to plan and employ National Guard (NG) Joint Task Forces (JTFs) for homeland defense (HD) and defense support of civil authorities (DSCA). The course has become a partnership between NGB and USNORTHCOM.

Specifically, the NG JTF Commander Course is designed to:

The Department of Defense (DOD) “Strategy for Homeland Defense and Civil Support” begins with the statement that protecting the United States homeland from attack is the highest priority for the Department of Defense. The events of recent years have changed the world dramatically. The United States is a nation at war, a war whose length and scope are unprecedented. The aftermath of Hurricane Katrina along the Gulf Coast and the Southwest Border mission clearly demonstrate the immense challenges and demands associated with DSCA. With all these challenging and diverse missions, “unified action” is the goal. Our ability to operate in a joint, interagency, nongovernmental, and intergovernmental environment will be decisive to our future success as a military and a country. A key factor in meeting these challenges and fulfilling the new strategy is the capability of the NG.

JOINT TASK FORCES. A joint task force (JTF) is a joint force that is constituted and so designated by a JTF establishing authority (i.e., the Governor of a State, the Secretary of Defense (SecDef), a Combatant Commander (CCDR), a subordinate unified CDR, or an existing CJTF, to conduct military operations or support to a specific situation. It usually is part of a larger state or national effort to prepare for or react to that situation.

A Dual Status Commander exists when a CDR is subject to both Federal and State chains of command. The 2004 National Defense Authorization Act amended U.S. Code Title 32, Section 325 (32 U.S.C. § 325), to allow a NG officer to retain his or her state commission after ordered to active duty (Title 10). The statutory change allows for a NG officer familiar with the state and local area of operations (AO) to serve both in a federal and state status to provide unity of effort for federal and state chains of command. Command authority for both Federal and State chains of command are mutually exclusive. Additionally, the statute requires both Presidential authorization and a Governor’s consent to the establishment of a Dual Status CDR. Previous Dual Status JTF Commanders have been established for the 2004 Group of Eight (G-8) Summit, 2004 Democratic and Republican Conventions, Operation WINTER FREEZE, 2008 Democratic and Republican Conventions, and the 2009 G-20 Pittsburgh Summit (PITTSUM). 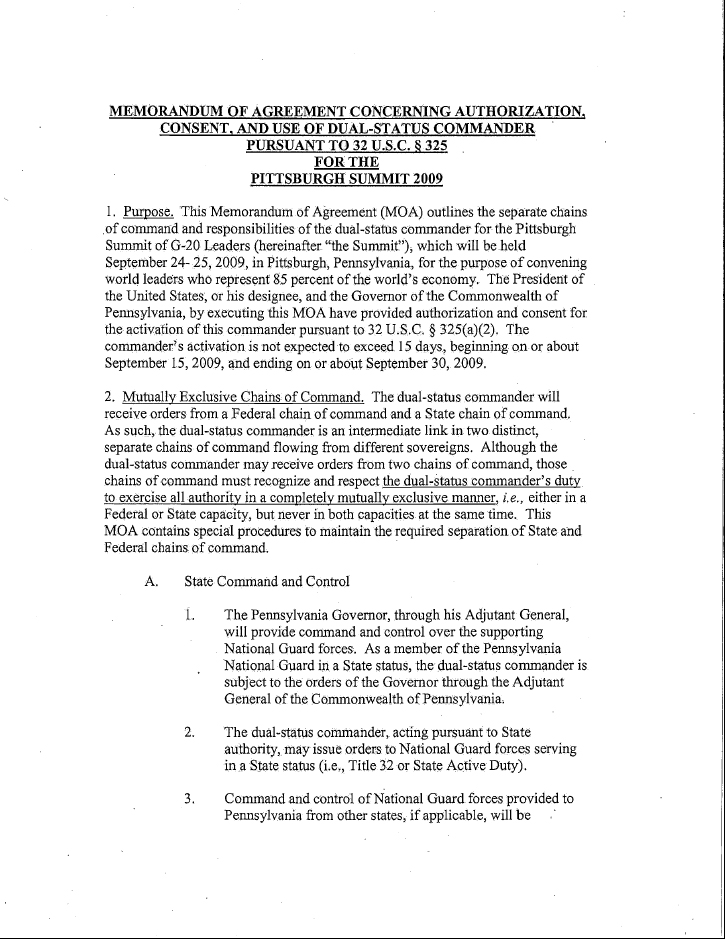