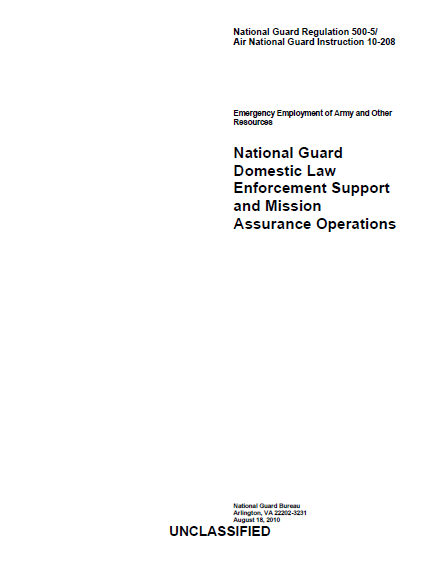 a. Consolidate the policy and responsibilities for National Guard law enforcement support and mission assurance operations.

4-4. Rules of Engagement and Rules for the Use of Force (ROE/RUF)

(2) The use of force must be restricted to the minimum degree consistent with mission requirements. The use of deadly force can be justified only by extreme necessity. Use criteria will be established by the state staff judge advocate.

(7) Pre-commitment briefing to all personnel covering essential information such as the mission, rules for the use of force, procedures governing the accountability and security of weapons, ammunition, and sensitive items; use of weapons and control of ammunition; special orders.

e. Failure to comply with the rules for the use of force may result in criminal prosecution.

g. The force continuum. National Guard forces conducting domestic law enforcement support must use the minimum amount of force necessary to obtain compliance with lawful orders. Military personnel are always authorized and expected to use necessary force proportional to the threat, in self-defense and defense of others. In order to determine the appropriate amount of force to use, Soldiers and Airmen must be familiar with the tactics, techniques and procedures associated with the six phases of the force continuum listed below. The levels of force are designed to correspond to the actions of the subject(s) and the National Guard member’s perceptions of the level of threat with which they are confronted. The use of force continuum describes the progression or de-escalation of force on the basis of the demonstrated level of compliance or resistance from a subject. The force continuum is not a ladder requiring each level to be achieved in sequence. A National Guard member providing law enforcement support may enter the force continuum at any level. The six broad levels are as follows:

(1) Level One – Officer Presence. The mere presence of uniformed law enforcement or National Guard personnel is often enough to stop or prevent most situations from escalating. At this level gestures by National Guard members should be non-threatening and professional. This level of force is always the best way to resolve any situation if possible.

(2) Level Two – Verbal Persuasion. Used in combination with a visible presence, the use of the voice can usually achieve the desired results. Whether the instruction is to, “Stop”, “Don’t Move”, “Be quiet”, “Listen to me”, or, “Let me see your ID” — voice commands in conjunction with mere presence will almost always resolve the situation. The content of the message is as important as demeanor. It is always best to start out calm, but firm and non-threatening. The choice of words and intensity can be increased as necessary, or used in short commands in more serious situations. The right combination of words in combination with presence can de-escalate a tense situation and prevent the need for a physical altercation.

(4) Level Four – Chemical Agents. When the suspect is violent or threatening, more extreme, but nonlethal measures must be used to bring the suspect under control, or affect an arrest. Before moving to this level of force, less physical measures should have been tried or deemed inappropriate. When used by surprise, pepper spray and tear gas are an excellent distraction, allowing National Guard personnel time to call for assistance or subdue a suspect.

(5) Level Five – Temporary Incapacitation. To use force at this level means that the situation was so extreme, violent, and immediate that it was necessary to temporarily incapacitate a suspect prior to arrival of the police. Temporary incapacitation is used to stop a suspect from injuring you or others long enough to restrain and handcuff them. Batons and Tasers may be used at this level to temporarily incapacitate a combative person.

(6) Level Six – Deadly Force. National Guard forces may use deadly force when it can be justified by extreme necessity. Deadly force is force that a person uses causing, or that a person knows or should know would create a substantial risk of causing, death or serious bodily harm. There are four requirements for the use of deadly force:

(a) Lesser means of force have been exhausted or are unavailable.

(b) The subject must have the ability to cause you or another serious bodily harm or death.

(c) You or another must be in imminent danger of serious bodily harm or death.

(d) Its use should not significantly increase the risk of death or serious bodily harm to innocent bystanders.

a. Located in over 3,000 local communities throughout the nation, readily accessible, routinely exercised with local first responders, and experienced in supporting neighboring communities, the National Guard is particularly well suited for domestic law enforcement support missions.

a. National Guard support to domestic law enforcement operations is tailorable and permits a rapid response to local, state and federal requirements. The missions are unique, yet work harmoniously in deterring criminal activity, responding to incidents, and protecting both military and civilian entities.

b. The National Guard in a law enforcement support role conducts myriad operations that include:

d. Deputizing National Guard Members. Criteria for the deputizing of National Guard members operating in a state status (state active duty or Title 32) in support of domestic law enforcement are defined by the laws, policies, directives and executive orders that govern the specific state in which operations will be conducted.

(1) When domestic unrest is beyond the capability of state and local law enforcement, a Governor may direct the involvement of the National Guard in augmenting state and/or local law enforcement agencies (LEA) in restoring public order or governmental functioning, preventing the loss of life or wanton destruction of property, or enforcing state law.

b. National Guard forces may initially deploy in a state active duty status. In doing so, they are not subject to the restrictions of the Posse Comitatus Act (see Appendix D for further discussion). National Guard forces remain under the command of state NG officers. Their assigned missions are coordinated with civil authorities.

c. The Adjutants General of the several states have the authority to use the federal property issued to the National Guard of their state or territory during periods of civil disturbance declared by their Governor. The state however may be responsible for reimbursement for the use of the federal property.

d. National Guard civil disturbance preparations focus on ensuring the ability to assist in the dispersal of those obstructing the enforcement of law and public order. Civil disturbance support operations may take place under various conditions and circumstances. Therefore, considering the potential consequences, planning and preparedness (to include training exercises) are paramount to success. Complete preparedness includes obtaining, maintaining, and training on nonstandard equipment and material unique to civil disturbance operations.

(1) Each of the several states will develop their own civil disturbance training and assessment plan. At a minimum the plan will include training on:

(a) Apprehension, search and detention

(5) All members authorized to carry firearms must have received training, achieved service qualification standards, and possess a current qualification testing on the type of firearm to be carried.

g. In their support to civil disturbance operations, National Guard forces may provide supplies, services, and equipment for use in the preservation of life and property to LEAs.