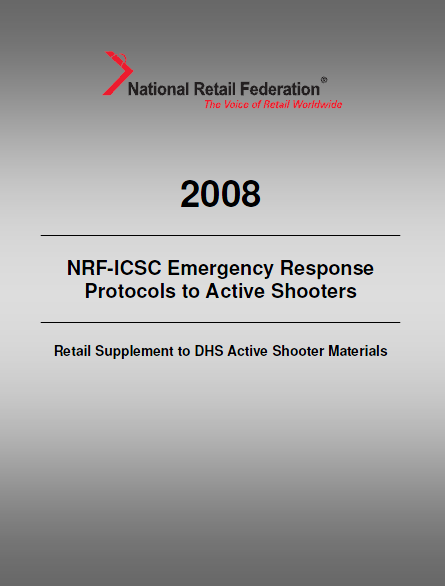 We live in a dangerous world and the stakes keep getting higher. Following the
shootings, which occurred in retail stores, during the 2007 holiday season and
continued into 2008, retailers, mall developers and law enforcement across the country
recognized the need for additional planning and response protocols, similar to the
efforts currently underway in schools and churches, to handle these critical incidents.
On March 31, 2008 over 30 retail loss prevention executives, law enforcement officers
and mall/property management executives met to discuss emergency response
protocols to active shooter situations. The nature of these events, various store
scenarios (specialty stores versus department stores) and case studies from past
incidents were used to create the information below.

The National Retail Federation (NRF) and International Council of Shopping Centers
(ICSC) worked directly with the U.S. Department of Homeland Security and retailers to
expand the information made available to the private and public sectors. The purpose of
this document is to supplement the information published by the U.S. Department of
Homeland Security (DHS) Commercial Facilities Sector Team as a retail-specific
document. DHS published training materials to address response protocols to active
shooters in any commercial facility. This document is a guide for the retail community
and can be adapted for the development of your crisis response in the event of an
active shooting incident at a retail store.

What is an Active Shooter?

According to the U.S. Department of Homeland Security, an Active Shooter is an
individual actively engaged in killing or attempting to kill people in a confined and
populated area; in most cases, active shooters use firearms(s) and there is no pattern
or method to their selection of victims. Active shooter situations are unpredictable and
evolve quickly. Typically, the immediate deployment of law enforcement is required to
stop the shooting and mitigate harm to victims. Because active shooter situations are
often over within 10 to 15 minutes, before law enforcement arrives on the scene,
individuals must be prepared both mentally and physically to deal with an active shooter
situation. 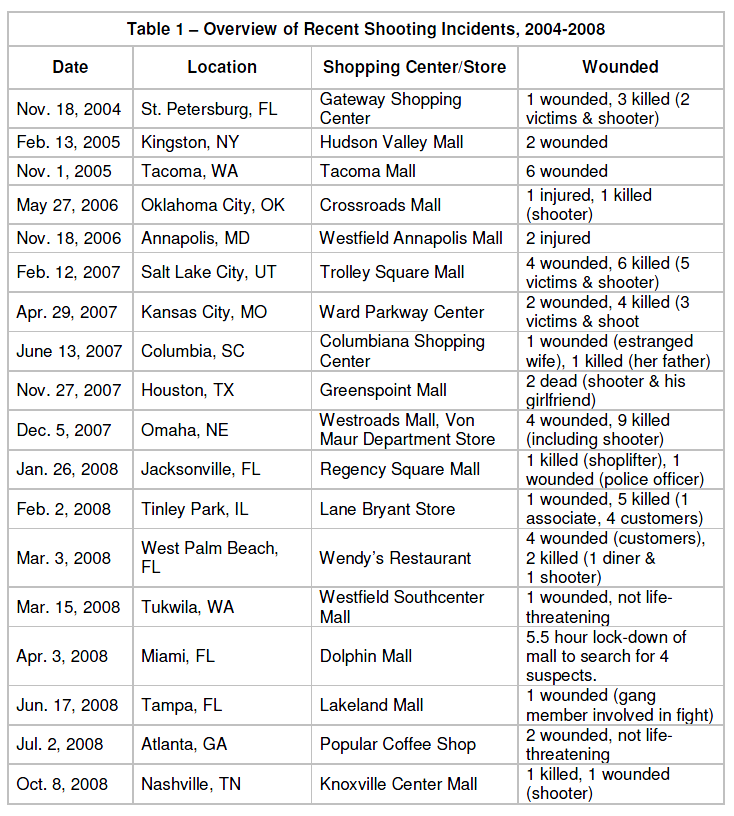 The frequency and devastating effects of the 2007 Holiday Season shootings initiated
reaction from the retail loss prevention community, mall developers and law
enforcement to work together more closely on planning for these occurrences.

Whether you are a retailer, employee, customer, mall management associate or law
enforcement officer, the basic rules apply for shootings that occur within:
• department stores
• specialty stores
• anchor stores/big box
• the common area of a mall
• strip center stores
• parking lot of a mall/strip center

Basic Guidelines for individuals present during an active shooting incident:
1. Assess the situation
2. React
a. Evacuate
b. Hide out/Shelter-in-Place
c. Take action
3. Call 911 when it is safe to do so

For retailers of all sizes and sectors needing assistance, refer to the Supplementary
Document “Active Shooters: In-Store Response Protocol Sample”, which contains
sample policy language being used by retailers. The sample protocols document is
intended to be a reference to help you navigate establishing your own company’s active
shooter policy.