The following is NATO’s strategic communications framework for military intervention in Libya in support of U.N. Security Council Resolution 1973. Though unclassified, NATO doctrine and policy documents are not released to the public. 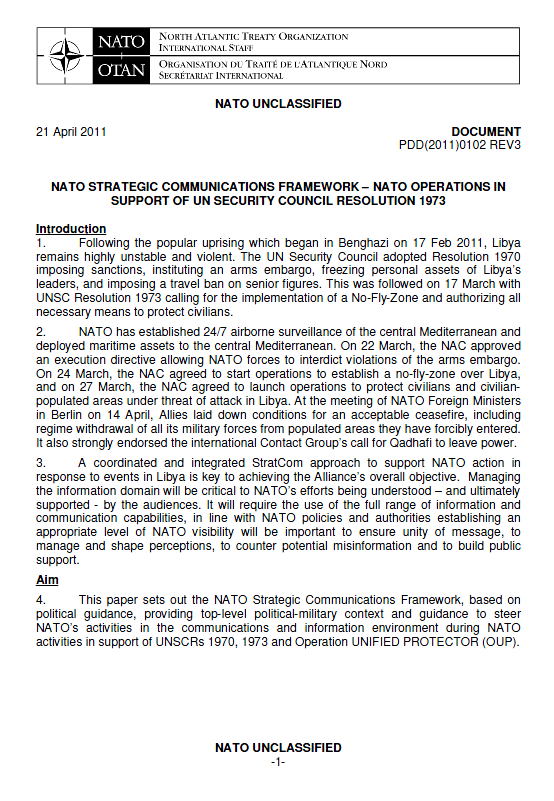 1. Following the popular uprising which began in Benghazi on 17 Feb 2011, Libya remains highly unstable and violent. The UN Security Council adopted Resolution 1970 imposing sanctions, instituting an arms embargo, freezing personal assets of Libya’s leaders, and imposing a travel ban on senior figures. This was followed on 17 March with UNSC Resolution 1973 calling for the implementation of a No-Fly-Zone and authorizing all necessary means to protect civilians.

2. NATO has established 24/7 airborne surveillance of the central Mediterranean and deployed maritime assets to the central Mediterranean. On 22 March, the NAC approved an execution directive allowing NATO forces to interdict violations of the arms embargo. On 24 March, the NAC agreed to start operations to establish a no-fly-zone over Libya, and on 27 March, the NAC agreed to launch operations to protect civilians and civilian-populated areas under threat of attack in Libya. At the meeting of NATO Foreign Ministers in Berlin on 14 April, Allies laid down conditions for an acceptable ceasefire, including regime withdrawal of all its military forces from populated areas they have forcibly entered. It also strongly endorsed the international Contact Group’s call for Qadhafi to leave power.

3. A coordinated and integrated StratCom approach to support NATO action in response to events in Libya is key to achieving the Alliance’s overall objective. Managing the information domain will be critical to NATO’s efforts being understood – and ultimately supported – by the audiences. It will require the use of the full range of information and communication capabilities, in line with NATO policies and authorities establishing an appropriate level of NATO visibility will be important to ensure unity of message, to manage and shape perceptions, to counter potential misinformation and to build public support.

4. This paper sets out the NATO Strategic Communications Framework, based on political guidance, providing top-level political-military context and guidance to steer NATO’s activities in the communications and information environment during NATO activities in support of UNSCRs 1970, 1973 and Operation UNIFIED PROTECTOR (OUP).

a) All audiences clearly understand NATO’s mandate and the scope of its actions, which are seen as a positive contribution to help mitigate the crisis, in support of UNSCRs 1970 and 1973.

b) Support for NATO’s actions is fostered and sustained, regionally and more widely within the International Community.

c) Communications activities and messages by NATO are seen as integrated with other players, including partner nations that are taking an active role.

d) StratCom activities contribute to enhancing cohesion in the Alliance and the wider coalition.

e) Those actors which may contribute to a worsening of the humanitarian situation and/or seek to undermine NATO actions are deterred from doing so. StratCom Core Message

6. The guiding core message for NATO operations and activities in and around Libya is :

“NATO’s operations are taking place in support of the UNSCRs 1970 and 1973 as part of the broad international effort. All NATO allies are committed to meet their responsibilities under the UN Security Council Resolution to stop the violence against the Libyan people and in support of their legitimate aspirations.”

7. The following themes are to be promoted to help achieve our StratCom objectives. These themes will, in turn, be reinforced by communications focus topics. Local circumstances will determine the precise manner in which the themes are promoted, but the aim is to leave audiences with the understanding that our mission reflects the following:

a) Responsibility – NATO is a responsible international actor and takes its obligations seriously. There is a clear and unambiguous responsibility to protect the Libyan people. NATO, as a multinational military alliance whose core tasks include crisis management, is best placed to help.

b) Legitimacy & Support – NATO is operating under a clear international legal mandate, in coordination with the Contact Group on Libya, and with broad regional support.

c) Commitment – NATO Allies are committed to use all necessary measures to protect Libyan civilians from violence or threat of violence, and to uphold the strong and clear mandate from the United Nations.

d) Resolve – NATO has the means and political resolve to sustain the effort against the regime until the will of the international community is obeyed by Qadhafi.

e) Cooperation & Realism – NATO is cooperating with a broad range of other actors, locally and regionally, and within the context of a larger international response. The crisis cannot be resolved by military action alone.

f) NATO as a Crisis Manager – NATO’s action is in line with NATO’s New Strategic Concept that commits NATO “to prevent crises, manage conflicts” in close consultation with its international partners, as they may affect Alliance security.