The following is NATO’s strategic communications framework for counter-piracy operations under Operation Ocean Shield. Though unclassified, NATO doctrine and policy documents are not released to the public. 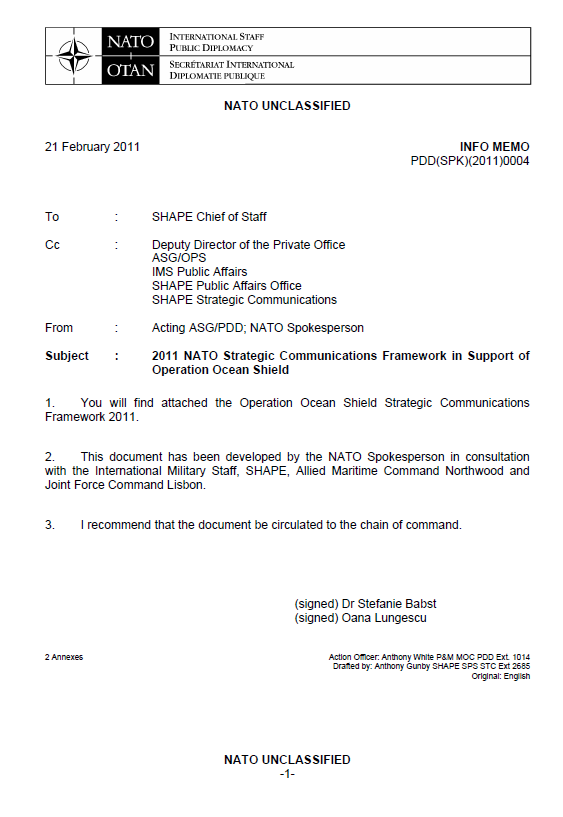 1. OPERATION OCEAN SHIELD was launched by the North Atlantic Council on 17 August 2009. NATO is conducting counter-piracy activities as part of an internationally recognised and supported effort in a region of strategic interest to the Alliance. NATO’s commitment is as a complementary player in coordination with the other international counter-piracy actors including the EU’s Operation ATALANTA, CTF-151, and individual nations.

2. In 2010, Allies agreed to prolong OPERATION OCEAN SHIELD to the end of 2012. In addition, they agreed to extend the Joint Operations Area, to increase the scope of port visits by deployed forces and to escort UN vessels to the harbour entrance of Mogadishu. Improved adoption of Best Management Practices (BMP) and the use self-protection measures by the merchant shipping industry has also had a positive effect. However, notwithstanding these initiatives and the combined efforts of the international counter-piracy actors, the scope and intensity of pirate activity off the Horn of Africa has continued to grow. While the incidence of piracy within the Gulf of Aden/Internationally Recognised Transit Corridor (IRTC) has been reduced to a low level, the total number of attacks has grown and the pirates’ increasing use of mother ships is allowing them to act with impunity.

3. The operational challenges facing NATO and its international partners are further compounded by increasing levels of frustration on the part of the shipping industry and regional actors. At the end of 2010, NATO Allies agreed to conduct a strategic review of all aspects of NATO’s counter-piracy efforts within the context of NATO’s overall maritime operations. A final report with recommendations should be endorsed by NATO Defence Ministers at their June 2011 meeting. The outcome of this review may lead to subsequent amendment to this framework document.

4. The guiding StratCom Core Message for OPERATION OCEAN SHIELD is that: “NATO is committed to a collaborative response to counter-piracy off the Horn of Africa in response to the UN request for protecting the safety of the commercial maritime routes and international navigation.”

5. Faced with a growing piracy challenge and the potential for critical media reporting of NATO’s contribution to international counter-piracy action, the 2011 OPERATION OCEAN SHIELD StratCom objectives are to:

a. clearly explain the scope and limitations of NATO’s OPERATION OCEAN SHIELD counter-piracy mission, and win the understanding and active support of the population of the Joint Operations Area, Somalia and neighbouring states, Troop Contributing Nations’ populations and the international community;

b. demonstrate and illustrate the contribution being made to OPERATION OCEAN SHIELD in contributing to international efforts to disrupt acts of piracy off the Horn of Africa;

c. dissuade audiences in the Joint Operations Area, Somalia and neighbouring states from conducting and supporting acts of piracy and armed robbery.

6. To be effective, messages, images and actions must be clear, coordinated and synchronized. Four themes are to be promoted during 2011. The ways in which these themes are articulated and demonstrated is to be determined on the basis of local circumstances, but the aim is to leave the audiences with an impression that our mission reflects the following:

a. NATO Responsiveness and Commitment – Within the context of an international collaborative response, NATO has the resolve, capability and commitment to confront threats to international security. Piracy is a threat to regional maritime trading activities, and the strategic interests of NATO Allies, which must be vigorously countered;

b. Cooperation – Maritime cooperation, coordination and complementarities with the other maritime Task Forces and individual navies are essential to fight piracy. The level of cooperation between these forces, and with merchant shipping organisations, is at an unprecedented high;

c. Capacity Building – within means, and subject to the agreement of Allies, NATO is receptive to requests for support from regional states to build regional counter-piracy capacity over the mid- to long-term in complementarity with other international efforts;

d. Realism – piracy off the Horn of Africa is one symptom of deeper political, developmental and security issues in the region. Solutions to these deeper problems lie beyond the means of NATO and require a comprehensive approach by the international community. Moreover, the geographic extent over which acts of piracy are attempted and limited number of assets available means that while NATO ships are proving to be effective at disrupting acts of piracy, the threat itself remains an international concern.

– The root causes of piracy off the Horn of Africa lie ashore and will require a determined effort from the international community to address.

– In close coordination with other international organisations and individual nations, NATO is engaged in countering the piracy threat.

– NATO is conducting counter-piracy operations in support of UN Security Council Resolutions in order to deter piracy activities off the Horn of Africa.

– OPERATION OCEAN SHIELD is a clear sign of the Alliance’s determination to play a role in the international efforts in the maritime field, and its flexibility in meeting the variety of challenges posed in today’s security environment.

– NATO coordinates and complements its efforts with other nations and organisations engaged in counter-piracy activities in and around the Horn of Africa.

– NATO engages at the local, regional and international level in order to deter, prevent and disrupt piracy activities off the Horn of Africa.

– NATO’s Standing Naval Maritime Groups are a multinational force that possesses the expertise, professionalism and experience to accomplish the mission. NATO welcomes contributions by other nations to join in NATO’s counter-piracy efforts.

– NATO supports efforts to develop counter-piracy capacity in and around the Horn of Africa in order to enhance maritime security in the region within the framework of the Contact Group on Piracy off the Coast of Somalia.

– NATO provides an effective and value-added contribution to counter-piracy efforts off the Horn of Africa, in coordination with and complementary to other nations and organisations.

– This operation continues the valuable contribution to maritime security made by NATO in support of World Food Programme humanitarian assistance activities during its earlier OPERATION ALLIED PROVIDER and OPERATION ALLIED PROTECTOR. NATO is open to further requests to provide similar support.

– NATO, through its activities and visible presence, is disrupting an increasing number of pirate attacks, although the total number of attacks continues to increase.