The following is NATO’s policy for strategic communications. Though unclassified, NATO doctrine and policy documents are not released to the public. 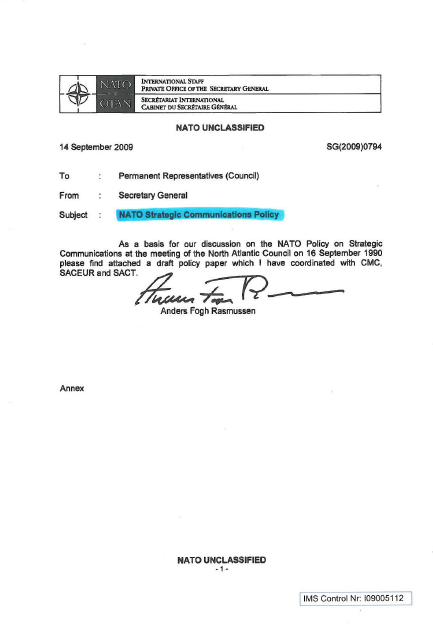 1. Today’s information environment, characterized by a 24/7 news cycle, the rise of social networking sites, and the interconnectedness of audiences in and beyond NATO nations territory, directly affects how NATO actions are perceived by key audiences. That perception is always relevant to, and can have a direct effect on the success of NATO operations and policies. NATO must use various channels, including the traditional media, internet-based media and public engagement, to build awareness, understanding, and support for its decisions and operations. This requires a coherent institutional approach, coordination of effort with NATO nations and between all relevant actors, and consistency with agreed NATO policies, procedures and principles.

10. NATO strategic communications aim, as appropriate to circumstances and theatres, to:

a. Contribute positively and directly in achieving the successful implementation of NATO operations, missions, and activities by incorporating strategic communications planning into all operational and policy planning;

b. Build, in close and lasting coordination with NATO nations, public awareness, understanding, and support for specific NATO policies, operations, and other activities in all relevant audiences; and

c. Contribute to general public awareness and understanding of NATO as part of a broader and on-going public diplomacy effort.

17. The following guidelines will apply to the use of social media by all NATO civilian and military staff, including all NATO personnel deployed on NATO operations :

a. The use of social media is permitted for all NATO military and civilian staff.

b. Social media can be used to discuss and portray the profession and day-day activities of NATO civilian and military staff

c. NATO civilian and military staff should not, however, use social media in ways that:

i. Compromise operational and / or organisational security, or put the safety of anyone at risk

iii. Comment on the policies of the Alliance and of NATO nations as they relate to security issues

iv. Violate the national laws of the country of origin of the staff member

18. Violation of these guidelines by personnel under NATO authority will be subject to appropriate sanction.