Navy Role in Irregular Warfare and Counterterrorism: Background and Issues for Congress 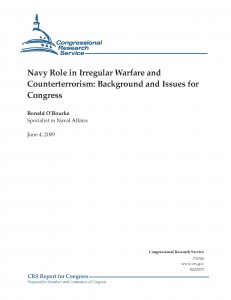 Statements from Secretary of Defense Robert Gates and other Department of Defense (DOD) officials suggest that the Quadrennial Defense Review (QDR) that is currently in progress may lead to an increased emphasis in future U.S. defense budgets on capabilities for conducting irregular warfare (IW) operations, such as counterinsurgency operations. In addition, counterterrorism (CT) operations have received an increased emphasis since the terrorist attacks of September 11, 2001.

The Navy for several years has carried out a variety of IW and CT activities, and has taken some steps in recent years to strengthen its ability to conduct such activities. The  overall issue for Congress is how much emphasis to place on IW and CT activities in future Navy budgets, and whether decisions reached by DOD on this issue in the QDR are appropriate. In addition to this overarching issue, the Navy’s IW and CT activities pose some specific potential oversight issues for Congress This report will be updated as events warrant.

The Navy for several years has carried out a variety of IW and CT activities, including the following:

• Navy sailors, many of them individual augmentees (IAs), serving on the ground in Iraq and Afghanistan in various mission areas;

• Tomahawk cruise missile attacks on suspected terrorist training camps and facilities, such as those reportedly conducted in Somalia on March 3 and May 1, 2008, and those conducted in 1998 in response to the 1998 terrorist bombings of U.S. embassies in East Africa;

• operations by Navy special operations forces, known as SEALs, that are directed against terrorists;3

• surveillance by Navy ships and aircraft of suspected terrorists overseas;

• maritime intercept operations (MIO) aimed at identifying and intercepting terrorists or weapons of mass destruction at sea, or potentially threatening ships or aircraft that are in or approaching U.S. territorial waters—an activity that includes Navy participation in the multilateral Proliferation Security Initiative (PSI);

• working with the Coast Guard to build maritime domain awareness (MDA)—a real-time understanding of activities on the world’s oceans;

• protection of forward-deployed Navy ships, an activity that was intensified following the terrorist attack on the Navy Aegis destroyer Cole (DDG-67) in October 2000 in the port of Aden, Yemen; and

• protection of domestic and overseas Navy bases and facilities.

Since 2005, the Navy has implemented a number of initiatives intended to increase its IW and CT capabilities, including the following:

• assuming command of a joint task force in the Horn of Africa, the detainee operation at Guantanamo, Cuba, and Fort Suse, a high-security prison in Iraq, and assuming the lead in defending the Haditha Dam in Iraq;

• engaging with the U.S. Coast Guard to use the National Strategy for Maritime Security to more rapidly develop capabilities for Homeland Security, particularly in the area of MDA.

In July 2008, the Navy established the Navy Irregular Warfare Office, which is intended, in the Navy’s words, to “institutionalize current ad hoc efforts in IW missions of counterterrorism and counterinsurgency and the supporting missions of information operations, intelligence operations, foreign internal defense and unconventional warfare as they apply to [CT] and [counterinsurgency].” The office works closely with U.S. Special Operations Command, and reports to the Deputy Chief of Naval Operations for information, plans, and strategy.