The following bulletin was obtained from the website of Safety and Security Instruction.  The bulletin was discussed in a July article from Brian Krebs, though the original document was not provided along with the article. 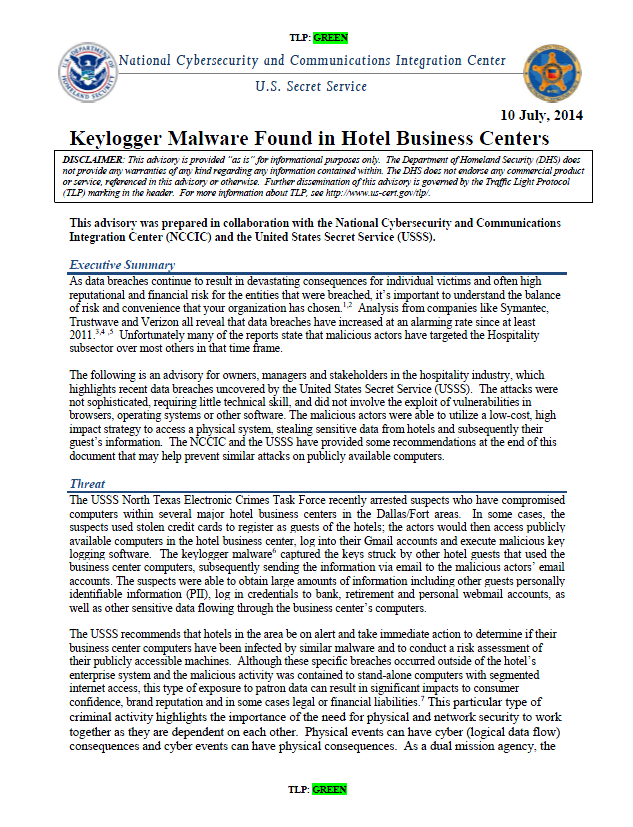 As data breaches continue to result in devastating consequences for individual victims and often high reputational and financial risk for the entities that were breached, it’s important to understand the balance of risk and convenience that your organization has chosen. Analysis from companies like Symantec, Trustwave and Verizon all reveal that data breaches have increased at an alarming rate since at least 2011. Unfortunately many of the reports state that malicious actors have targeted the Hospitality subsector over most others in that time frame.

The following is an advisory for owners, managers and stakeholders in the hospitality industry, which highlights recent data breaches uncovered by the United States Secret Service (USSS). The attacks were not sophisticated, requiring little technical skill, and did not involve the exploit of vulnerabilities in browsers, operating systems or other software. The malicious actors were able to utilize a low-cost, high impact strategy to access a physical system, stealing sensitive data from hotels and subsequently their guest’s information. The NCCIC and the USSS have provided some recommendations at the end of this document that may help prevent similar attacks on publicly available computers.

The USSS North Texas Electronic Crimes Task Force recently arrested suspects who have compromised computers within several major hotel business centers in the Dallas/Fort areas. In some cases, the suspects used stolen credit cards to register as guests of the hotels; the actors would then access publicly available computers in the hotel business center, log into their Gmail accounts and execute malicious key logging software. The keylogger malware6 captured the keys struck by other hotel guests that used the business center computers, subsequently sending the information via email to the malicious actors’ email accounts. The suspects were able to obtain large amounts of information including other guests personally identifiable information (PII), log in credentials to bank, retirement and personal webmail accounts, as well as other sensitive data flowing through the business center’s computers.

The USSS recommends that hotels in the area be on alert and take immediate action to determine if their business center computers have been infected by similar malware and to conduct a risk assessment of their publicly accessible machines. Although these specific breaches occurred outside of the hotel’s enterprise system and the malicious activity was contained to stand-alone computers with segmented internet access, this type of exposure to patron data can result in significant impacts to consumer confidence, brand reputation and in some cases legal or financial liabilities. This particular type of criminal activity highlights the importance of the need for physical and network security to work together as they are dependent on each other. Physical events can have cyber (logical data flow) consequences and cyber events can have physical consequences. As a dual mission agency, the United States Secret Service has long recognized the importance of this methodology in its Protective mission of protecting people and events The USSS Critical System Protection methodology focuses on both the physical and local (cyber) assessment of events and has recognized that to be truly effective in protecting any system, you must establish, monitor and maintain control over both the physical and logical access of your assets.

Contacting your network administrator to request that: