The following document was obtained from the website of a professional organization in the State of New York. 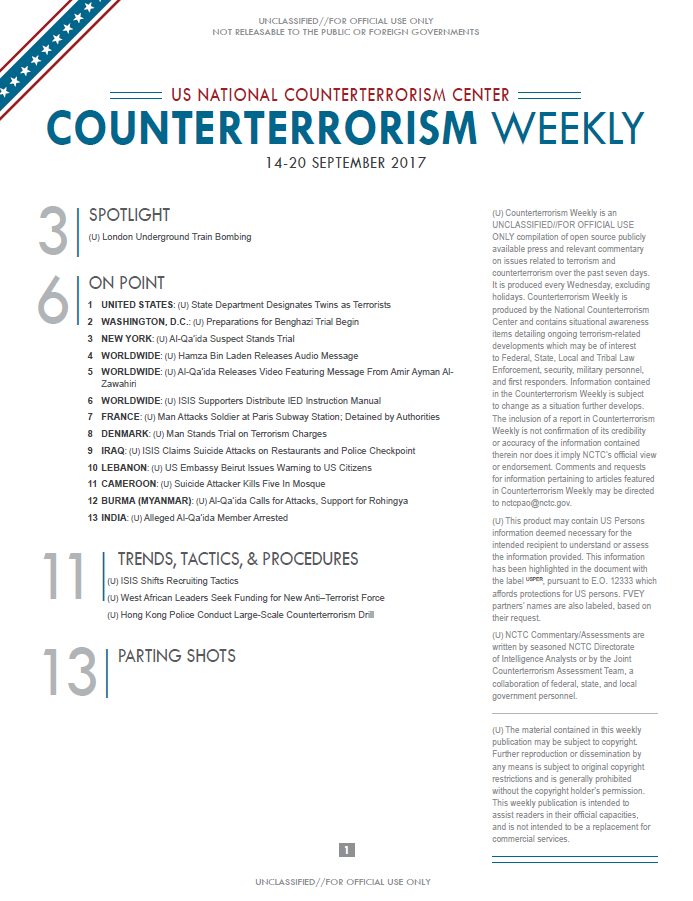 (U) On 15 September, at 0720 GMT (0320 EST), an explosion occurred on a rush-hour commuter train at Parsons Green station in west London, UK, injuring 22 people. London’s Mayor Sadiq Khan stated, “The Metropolitan Police have confirmed that the explosion on a train at Parsons Green station this morning is being treated as terrorism.” As of 20 September, authorities had detained five suspects in connection with the attacks. ISIS claimed responsibility for the attack through its Amaq news agency.

(U) According to images of the device posted on social media immediately after the attack, the device was an IED placed in a white bucket with a supermarket freezer bag on the floor. Christmas lights appeared to protrude from the top of the bucket. Ben Wallace, the UK’s security minister, confirmed the Parsons Green bomb “used the type of explosive similar to that used in Manchester.” However, the images the appeared to show “deflagration”—in which a substance burns away rapidly—rather than detonation, which would resulted in more casualties, according to explosive expert Frank Gardner, the BBC’s security correspondent. Most of the 22 people taken to hospital suffered “flash burns” in the explosion, according to Metropolitan Police Assistant Commissioner Mark Rowley.

(U) In August, ISIS released a seven-minute, English-language video encouraging would-be fighters to travel to the Philippines instead of Syria and Iraq. The video was the latest sign the group has shifted its recruiting tactics as it loses ground to Coalition Forces in the Middle East. Asia has become a new focus for ISIS, according to private sector analysts, such as Flashpoint Intelligence.

At a 1 August press conference in Washington, D.C., Secretary of State Rex Tillerson stated US intelligence is aware ISIS fighters from other countries are operating in Philippines. Tillerson added, “We already see elements of ISIS in the Philippines, as you’re aware, gaining a foothold. Some of these fighters have gone to the Philippines from Syria and Iraq. We are in conversations with the Philippine government, with Indonesia, with Malaysia, with Singapore, with Australia, as partners to recognize this threat, try to get ahead of this threat.”

(U) On 13 September, Mali and Niger made an appeal aimed at international funding for a regional force created to counter terrorist uprisings. Mali’s President Ibrahim Boubacar Keita and Niger’s Mahamadou Issoufou stated the force was assembled by the G5 Sahel bloc—Mali, Mauritania, Burkina Faso, Niger, and Chad—and was crucial to fighting a threat which was beyond their borders. About 5,000 troops will make up the force, which is expected to be in operation by the fall.

(U) A multinational force in the Lake Chad region—including soldiers from Niger, Nigeria, Chad, and Cameroon—had some success against Boko Haram terrorists, in which efforts were financed by Africa’s biggest economy, Nigeria, according to Issoufou. Although no country in the G5 had sufficient resources, Keita believes if these countries work together they will be a greater impact in fighting terrorism. Issoufou noted how important it is for the international community to recognize this need and come together to provide the needed resources to accomplish the mission.