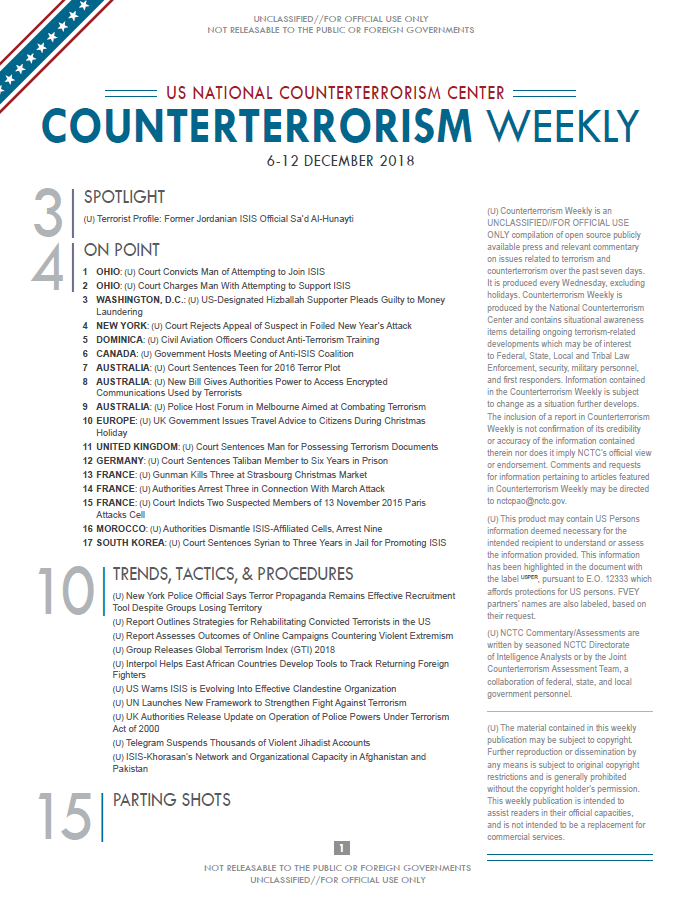 (U) Jordanian national Sa’d al-Hunayti was a leading member of the Jihadist Salafi movement in Jordan before he traveled to Syria and joined Nusrah Front then ISIS. Hunayti was ultimately arrested by Hayat Tahrir al-Sham (HTS) for reportedly being a leader in ISIS-run secret cells in Idlib Province, Syria, that planted IEDs and conducted kidnappings and assassinations in northwest Syria.

(U) During the 1980s, Hunayti studied history at Yarmouk University in north Jordan and was suspended twice for “his political positions.” During this period, he was influenced by Sayyid Qutb’s idea of “governance,” according to Dr. Muhammad Abu-Rumman, a Jordanian researcher who specializes in Political Thought and Islamic Movements. (Sayyid Qutb was the Spotlight topic in the 23 May 2018 issue of this publication.)

(U) In 2011, Hunayti was arrested by Jordanian security forces after demonstrations in Al Zarqa that called for governmental and constitutional reforms. The protests were led by the Islamist movement, which dominated the political opposition, and by the popular protest movement, which encompassed numerous pro-reform organizations. Hunayti was released from Jordanian custody in October 2013.

(U) In April 2014, Hunayti traveled to Syria at the behest of senior Salafi Jihadi ideologue Abu-Muhammad al-Maqdisi to mediate between Nusrah Front and ISIS during their clashes in Deir az-Zour. Bassam al-Nu’aymi, an activist in the Jihadist Salafi movement in Jordan, said that after the failure of his reconciliation initiative, Hunayti received an offer from Nusrah Front leader Abu-Muhammad al-Jawlani to become a Sharia judge and head of the courthouse in northern Syria. The judicial branch faced controversy due to suspicious verdicts, leading to tensions with the Nusrah Front leadership that Hunayti viewed as hindering his “implementation of sharia.”

■ (U) Telegram’s “ISIS Watch” initiative to block channels with “terrorist content” was launched in 2016 after the company came under pressure over the number of violent jihadists operating on its platform. The ISIS Watch channel provided daily and monthly totals for its account suspensions.

■ (U) The Telegram cull followed a recent effort by ISIS to beef up its presence on the platform. ISIS operated a network of multiple channels and groups on Telegram under the “Nashir news agency” brand.

■ (U) Since 12 November, Nashir started advertising a flurry of new Telegram groups to complement its already swelling number of channels, enhancing the overall number of ISIS outlets on the platform.

■ (U) The measure of having dozens of mirror accounts, so far unique to ISIS, was designed to mitigate the impact of take-downs on the group’s media operation. So when 10 or 50 accounts are suspended, other duplicate accounts are still active.

■ (U) In November 2017, Nashir claimed to be operating 600 duplicate channels and groups. While this might have been an exaggerated figure, the group indeed has dozens of active accounts on Telegram. (BBC)

JCAT: (U//FOUO) The desire for and reliance on terrorists and their supporters to communicate electronically with like-minded individuals provides potential investigative avenues through human operations, outreach, and targeting analysis. While a subject’s communications can be anonymized or encrypted, often their participation in online forums, chat rooms, and initial contact with others may not be, providing a window for discovering trends and methods in terrorist COMSEC. (JCAT)