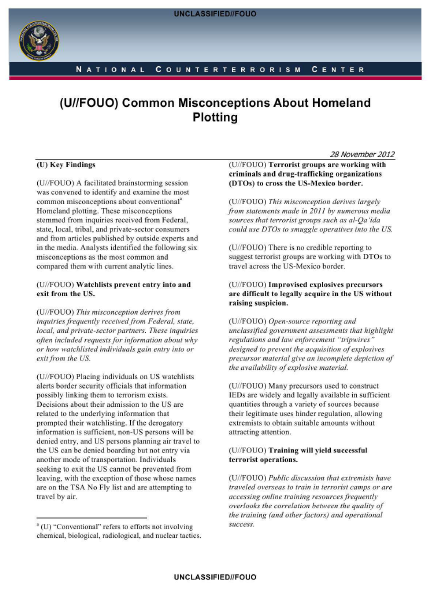 (U//FOUO) A facilitated brainstorming session was convened to identify and examine the most common misconceptions about conventional Homeland plotting. These misconceptions stemmed from inquiries received from Federal, state, local, tribal, and private-sector consumers and from articles published by outside experts and in the media. Analysts identified the following six misconceptions as the most common and compared them with current analytic lines.

(U//FOUO) Watchlists prevent entry into and exit from the US.

(U//FOUO) This misconception derives from inquiries frequently received from Federal, state, local, and private-sector partners. These inquiries often included requests for information about why or how watchlisted individuals gain entry into or exit from the US.

(U//FOUO) Placing individuals on US watchlists alerts border security officials that information possibly linking them to terrorism exists. Decisions about their admission to the US are related to the underlying information that prompted their watch listing. If the derogatory information is sufficient, non-US persons will be denied entry, and US persons planning air travel to the US can be denied boarding but not entry via another mode of transportation. Individuals seeking to exit the US cannot be prevented from leaving, with the exception of those whose names are on the TSA No Fly list and are attempting to travel by air.

(U//FOUO) Terrorist groups are working with criminals and drug-trafficking organizations (DTOs) to cross the US-Mexico border.

(U//FOUO) This misconception derives largely from statements made in 2011 by numerous media sources that terrorist groups such as al-Qa ‘ida could use DTOs to smuggle operatives into the US.

(U//FOUO) There is no credible reporting to suggest terrorist groups are working with DTOs to travel across the US-Mexico border.

(U//FOUO) Improvised explosives precursors are difficult to legally acquire in the US without raising suspicion.

(U//FOUO) Open-source reporting and unclassified government assessments that highlight regulations and law enforcement “tripwires ” designed to prevent the acquisition of explosives precursor material give an incomplete depiction of the availability of explosive material.

(U//FOUO) Many precursors used to construct IEDs are widely and legally available in sufficient quantities through a variety of sources because their legitimate uses hinder regulation, allowing extremists to obtain suitable amounts without attracting attention.

(U//FOUO) Public discussion that extremists have traveled overseas to train in terrorist camps or are accessing online training resources frequently overlooks the correlation between the quality of the training (and other factors) and operational success.

(U//FOUO) The relationship between training in attack planning and operational success- in which the majority or all objectives are achieved- is not strong.

(U//FOUO) Terrorists are focused on attacking only major US cities.

(U//FOUO) Open-source reporting and perceptions of past terrorist attacks have instilled in some Federal partners an impression that terrorist groups, such as al-Qa ‘ida, and homegrown violent extremists are targeting only specific major US cities.

(U//FOUO) Terrorist groups and individual extremists historically have focused on significant or symbolic targets in various locations, often in or around urbanized areas,b and have not restricted targeting to only specific major US cities.

(U//FOUO) The terror is planning cycle is uniform and relatively long.

(U//FOUO) Open-source reporting, private think-tank reports, and government assessments highlighting key indicators of a terrorist attack give the impression that a planned attack will require a predetermined period of time and sequential steps prior to execution with corresponding detectable indicators.

(U//FOUO) Attack planning and preparation generally proceed through several stages, although the details, sequencing, and timing can vary greatly and can change as operational circumstances evolve.