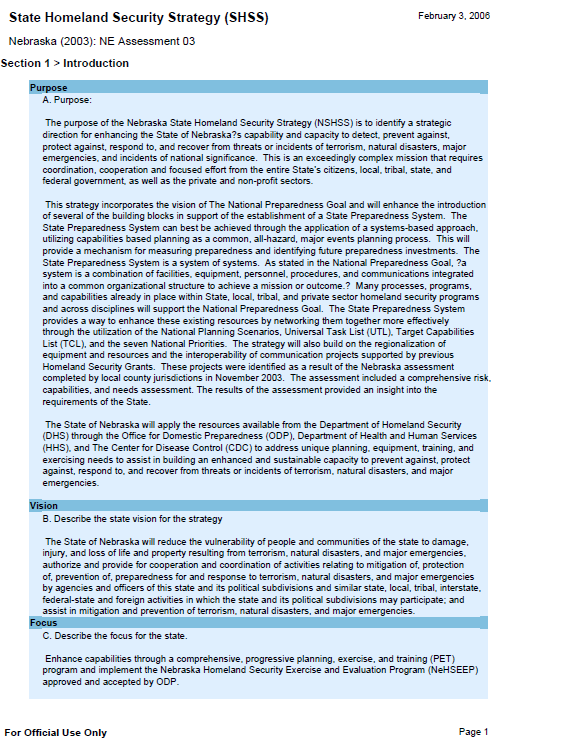 The purpose of the Nebraska State Homeland Security Strategy (NSHSS) is to identify a strategic direction for enhancing the State of Nebraska?s capability and capacity to detect, prevent against, protect against, respond to, and recover from threats or incidents of terrorism, natural disasters, major emergencies, and incidents of national significance. This is an exceedingly complex mission that requires coordination, cooperation and focused effort from the entire State’s citizens, local, tribal, state, and
federal government, as well as the private and non-profit sectors.

This strategy incorporates the vision of The National Preparedness Goal and will enhance the introduction of several of the building blocks in support of the establishment of a  State Preparedness System. The State Preparedness System can best be achieved through the application of a systems-based approach, utilizing capabilities based planning as a common, all-hazard, major events planning process. This will
provide a mechanism for measuring preparedness and identifying future preparedness investments. The
State Preparedness System is a system of systems. As stated in the National Preparedness Goal, ?a
system is a combination of facilities, equipment, personnel, procedures, and communications integrated
into a common organizational structure to achieve a mission or outcome.? Many processes, programs,
and capabilities already in place within State, local, tribal, and private sector homeland security programs
and across disciplines will support the National Preparedness Goal. The State Preparedness System
provides a way to enhance these existing resources by networking them together more effectively
through the utilization of the National Planning Scenarios, Universal Task List (UTL), Target Capabilities
List (TCL), and the seven National Priorities. The strategy will also build on the regionalization of
equipment and resources and the interoperability of communication projects supported by previous
Homeland Security Grants. These projects were identified as a result of the Nebraska assessment
completed by local county jurisdictions in November 2003. The assessment included a comprehensive risk,
capabilities, and needs assessment. The results of the assessment provided an insight into the
requirements of the State.

The State of Nebraska will apply the resources available from the Department of Homeland Security
(DHS) through the Office for Domestic Preparedness (ODP), Department of Health and Human Services
(HHS), and The Center for Disease Control (CDC) to address unique planning, equipment, training, and
exercising needs to assist in building an enhanced and sustainable capacity to prevent against, protect
against, respond to, and recover from threats or incidents of terrorism, natural disasters, and major
emergencies.

B. Describe the state vision for the strategy

The State of Nebraska will reduce the vulnerability of people and communities of the state to damage,
injury, and loss of life and property resulting from terrorism, natural disasters, and major emergencies,
authorize and provide for cooperation and coordination of activities relating to mitigation of, protection
of, prevention of, preparedness for and response to terrorism, natural disasters, and major emergencies
by agencies and officers of this state and its political subdivisions and similar state, local, tribal, interstate,
federal-state and foreign activities in which the state and its political subdivisions may participate; and
assist in mitigation and prevention of terrorism, natural disasters, and major emergencies.

The Nebraska Emergency Management Act of 1996 states, ?It shall be a sufficient reason for the
Governor to require an interjurisdictional emergency management agreement or arrangement pursuant to
section 81-829.47 of the Nebraska Emergency Management Act if the area and local governments
involved have available equipment, supplies, and forces necessary to provide mutual aid on a regional
basis?. A key aspect of Nebraska’s strategy since 1999 has been to develop State Memorandums of
Understanding (MOU) Emergency Response Teams in selected jurisdictions with HazMat capabilities to
become a state resource for HazMat/WMD response. There are 11 MOU jurisdictions geographically
located across the State in addition to 1 Urban Area Security Initiative (UASI) consisting of 3 counties
surrounding the core City of Omaha. These jurisdictions and the UASI have been identified as priority
jurisdictions for past and future Homeland Security Grants with an emphasis on regional HazMat/WMD
response capability.

In addition to the HazMat/WMD MOU jurisdictions, we have also identified 13 interoperable
communications regions for the entire State. These regions were developed in cooperation with the
Nebraska Division of Communications. Common use frequencies based on current mutual aid agreements,
geographical distribution of the communities with common threats and capabilities and the ability to
leverage existing financial resources were the criteria for this regionalization. Prior to receiving Homeland
Security Grant funding each communication region had to develop a communications plan for approval by
the Nebraska Division of Communications. The State of Nebraska plans to utilize the 13 interoperable
communication regions or areas of common interest to implement the National Preparedness Goal and
State Preparedness System on a regional basis.

Interstate response activities at the local level are accomplished by response organization, city and village
governments, and county governments maintaining active mutual aid agreements that cross state
boundaries and the state to state assistance is accomplished through the Emergency Management
Assistance Compact (EMAC).

In support of the National Priority, emphasizing terrorism information sharing, the Nebraska State Patrol
(NSP) supported by the SAA has been very successful in its previous Homeland Security initiatives by
identifying, combining and/or enhancing existing resources. Creating a second information gathering and
dissemination point is not the best use of the tax payers dollars and would add an unnecessary, redundant layer in the information sharing arena that is in operation today.

The following resources are currently available and used for information fusion between and among state,
local, federal, and interstate partners in law enforcement and terrorism prevention.

The Nebraska Law Enforcement Information Network System (NeLEIS) is an automated information
gathering / research / dissemination tool developed by the NSP and the Nebraska Crime Commission in
1997. The original concept was designed for the submission and dissemination of information directly
related to narcotics distribution. The original concept of this information sharing system has been
expanded over the years to include all criminal information and potential terrorist activities. This system
also taps information sources from the following agencies Lincoln Police Department (LPD), Omaha Police
Department (OPD), Norfolk Police Department, Grand Island Police Department, NSP, and the federal
agencies DEA, Midwest High Intensity Drug Trafficking Area (MHIDTA) and the FBI. The system also
accesses the Nebraska NCJIS data source. This system offers secure e-mail and secure instant messaging
for authorized users. The NeLEIS was designed with an automated deconfliction component built into it.
This insures that when a user accesses information the submitter of that information is notified. This
facilitates communication between the two agencies.

The Nebraska Law Enforcement Intelligence Network (NeLEIN) is a communications network that specially
trained local and state law enforcement officers use to gather, submit, and share information related to
criminal activity across the state. NeLEIN is a primary network used by the NSP as well as several local,
county, state and Federal law enforcement agencies and are members of the MHIDTA.

The Regional Information Sharing System (RISS) is a nation wide intelligence gathering and dissemination
system developed in the mid 80’s to facilitate the exchange of criminal intelligence information across the
United States. Nebraska is an active member of the RISS net through participation in our regional
clearing house, the Mid-States Organized Crime Information Center (MOCIC). During 1999, RISS
began expansion of RISSNET to electronically connect state and federal law enforcement agency systems
as nodes to provide additional resources to all users. As of May 2005, 17 High Intensity Drug Trafficking
Areas, 18 state agencies, and 12 other federal and regional systems have an established node connection
to RISSNET.

In September 2002, the FBI Law Enforcement On-line (LEO) system interconnected with RISS. In
October 2003, the RISS/LEO interconnection was recommended in the National Criminal Intelligence
Sharing Plan as the initial sensitive but unclassified communications backbone for implementation of a
nationwide criminal intelligence sharing capability. The Plan encourages agencies to connect their system to
RISS/LEO.

In April 2003, RISS expanded its services and implemented the Anti-Terrorism Information Exchange,
now called the Automated Trusted Information Exchange (ATIX), to provide additional users with access
to homeland security, disaster, and terrorist-threat information. RISS member agencies as well as
executives and officials from other first-responder agencies and critical infrastructure entities can access
ATIX.