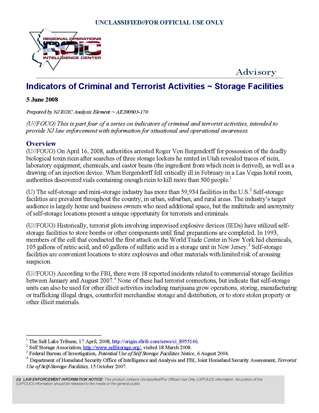 (U//FOUO) On April 16, 2008, authorities arrested Roger Von Bergendorff for possession of the deadly biological toxin ricin after searches of three storage lockers he rented in Utah revealed traces of ricin, laboratory equipment, chemicals, and castor beans (the ingredient from which ricin is derived), as well as a drawing of an injection device. When Bergendorff fell critically ill in February in a Las Vegas hotel room, authorities discovered vials containing enough ricin to kill more than 500 people.

(U) The self-storage and mini-storage industry has more than 59,934 facilities in the U.S. Self-storage facilities are prevalent throughout the country, in urban, suburban, and rural areas. The industry’s target audience is largely home and business owners who need additional space, but the multitude and anonymity of self-storage locations present a unique opportunity for terrorists and criminals.

(U//FOUO) Historically, terrorist plots involving improvised explosive devices (IEDs) have utilized selfstorage facilities to store bombs or other components until final preparations are completed. In 1993,
members of the cell that conducted the first attack on the World Trade Center in New York hid chemicals, 105 gallons of nitric acid, and 60 gallons of sulfuric acid in a storage unit in New Jersey. Self-storage
facilities are convenient locations to store explosives and other materials with limited risk of arousing suspicion.

(U//FOUO) According to the FBI, there were 18 reported incidents related to commercial storage facilities between January and August 2007. None of these had terrorist connections, but indicate that self-storage units can also be used for other illicit activities including marijuana grow operations, storing, manufacturing or trafficking illegal drugs, counterfeit merchandise storage and distribution, or to store stolen property or other illicit materials.

(U//FOUO) The following represents activities that may be of concern to self-storage facility owners, operators, and employees, as well as law enforcement, serving as pre-incident indicators of terrorist or criminal activity. Alone, each indicator could point to legitimate commercial activity. Multiple indicators combined with other factors could suggest criminal activity or a terrorist threat.

(U//FOUO) Unusual activity by self-storage customers may provide a possible indication of preoperational activity. Behaviors of concern include:

• Insisting on paying cash, sometimes weeks or months in advance

Inappropriate Use of Storage Unit

(U//FOUO) Storage of any of the following, particularly in large quantities, may indicate logistical planning for a terrorist attack:

• Agricultural or industrial chemicals and sprayers

• Flight manuals or other similar materials

• Suspicious textbooks and journals, including those involving biology, chemistry, explosives, or poisons

(U) If you encounter indicators of possible criminal or terrorist activities, please contact CT Watch personnel at the NJ ROIC, 866-4-SAFE-NJ (866-472-3365). The NJ ROIC is available 24 hours a day, seven days a week.

(U) Comments or questions regarding this product should be directed to the NJ ROIC Analysis Element, 609-963-6900, or njroicanalysis@gw.njsp.org.