The following document was obtained from a website associated with the State of Maryland. 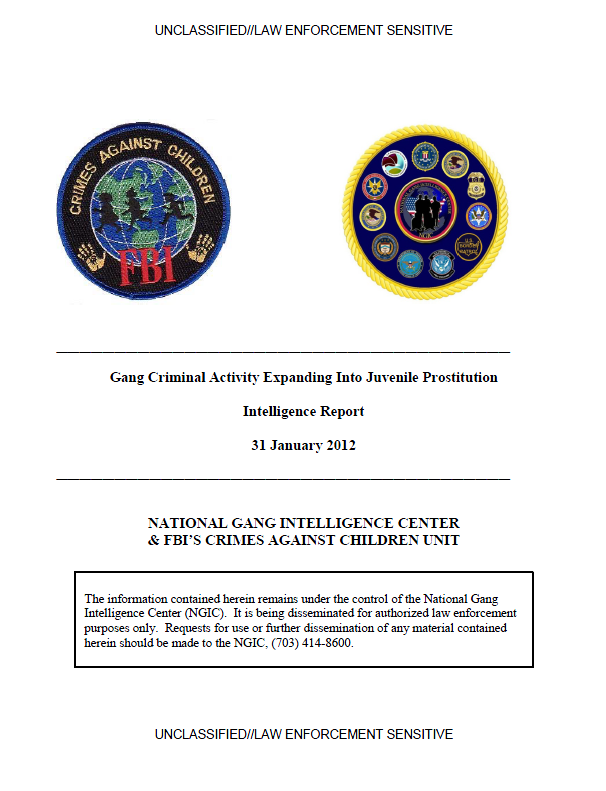 (U//FOUO) The National Gang Intelligence Center (NGIC) and the FBI’s Crimes Against Children Unit (CACU) assesses with medium confidence that gang activity is expanding towards juvenile prostitution primarily for its steady financial rewards and perceived low risk of law enforcement interaction. Historically, prison, street and outlaw motorcycle gangs profit from drug distribution and have recently become involved in non-traditional criminal activity such as mortgage fraud and identity theft. Some gangs appear to be diversifying their income by reducing or eliminating drug trafficking activities in favor of juvenile prostitution.

• (U//FOUO) Juvenile prostitution is expanding as an additional source of income for many gangs, primarily for its high and steady financial rewards and perceived low risk of apprehension and punishment.
• (U//FOUO) Gang members and associates target young, vulnerable, and often runaway girls to recruit them into prostitution, while also sexually exploiting female gang member associates to capitalize on financial opportunities. Gang members and associates recruit and exploit juveniles at detention centers, public housing units, shopping malls, schools, flea markets, sporting events, and through telephone chat lines.
• (U) Gang control techniques include the use of violence, sexual assault, branding, and manipulation of victims in furtherance of their enterprise.
• (U//FOUO) Consistent with current trends in juvenile prostitution, gang members use the Internet to recruit, advertise and exploit victims of juvenile prostitution through modern technology due to the perceived anonymity of cyberspace.

(U) As observed with traditional pimps, gang control techniques include the use of violence, sexual assault, branding, and manipulation of victims to commit other crimes in furtherance of the gang. Gang members provide security, transport the victims to the dates, and schedule appointments often exploiting the victims for free sex. As part of efforts by the pimp to remove himself from direct prostitution operations and shift culpability away from himself, juvenile victims – some of them female gang members and associates – may be forced to advertise for the business, solicit customers, schedule appointments, and collect money for the gang.

• (U) As of November 2011, MS-13 gang members would prostitute victims, whose ages ranged from 15 to 17, on numerous occasions while providing other gang members with free sexual encounters. The gang members also manipulated the victims into obtaining clients, scheduling prostitution appointments, transporting juvenile females to appointments, and collecting money.
• (U) In October 2011, an MS-13 member in Springfield, Virginia, was arrested for operating a prostitution ring involving juvenile runaway girls. The MS-13 member, who allegedly recruited customers and provided security for their appointments, is also accused of threatening the girls and physically assaulting them if they did not want to have sex with clients. He also carried a machete for security duties and had sex with the juvenile girls free of charge.
• (U//FOUO) According to June 2011 FBI reporting, MS-13 gang members in the Washington, DC metropolitan area brandedd their prostitutes’ bodies with “M” and “S” gang symbols using knives and razors to show ownership.
• (U//LES) In December 2010, a suspected Bloods gang member in Toledo, Ohio, allegedly prostituted a 14-year old juvenile female member of the Bloods gang, and girlfriend of the Bloods member. The Bloods member reportedly hosted parties at his home where he forced the victim to have sex with other partygoers, while assaulting the victim and preventing her from leaving.

(U//FOUO) Consistent with current juvenile prostitution trends, gang members and pimps are using the Internet to recruit, advertise, and exploit their victims. Some authorities suggest that gangs are enticed into Internet prostitution by the potentially large profits derived from forcing their victims to prostitute themselves online, in addition to the convenience and anonymity of cyberspace, which often makes prostitution difficult for authorities to detect. The ease of Internet advertising and the use of smart phones have also afforded gangs a larger clientele and recruitment base.

• (U) In November 2011, two members of the Crips gang in Oceanside, California, were sentenced to 10 years in federal prison for the sex trafficking children – mostly runaways – and forcing them into prostitution. Senior members of the enterprise directed junior level members often times from a prison cell. The gang used Internet websites such as Facebook, Twitter, and Craigslist to advertise their victims and find customers.
• (U//FOUO) As of November 2011 an identified Gangster Disciples pimp, with a violent criminal history, recruited juvenile victims through facebook.com, and advertised them on backpage.com, a known escort website.
• (U//LES) February 2011 FBI reporting indicates that several pimps allegedly associated with the Bloods, are operating an underage sex trafficking and prostitution ring in New Orleans, Louisiana and Memphis, Tennessee. The pimps photographed female juvenile victims and posted their photos on Internet websites and message boards to attract customers. The websites included myredbook.com, backpage.com, poshlistings.com, myproviderguide.com, mypreviews.com, cheatingboards.com, and cityvibe.com.

(U//FOUO) The NGIC and CACU assesses with medium confidence that based on trends observed in the past several years, gangs will continue to expand their involvement in juvenile prostitution, while in some instances, minimizing their involvement in traditional drug distribution activities. The NGIC and CACU further assesses with medium confidence that rival gang members will likely cross jurisdictions and collaborate with each other when motivated by the financial gain incurred from juvenile prostitution activity. The exploitation of juvenile victims for prostitution will likely continue to be popular with gang members in as much as gang members are opportunistic criminals. However, proposed changes in legislation to increase the punishment from a misdemeanor to a felony for solicitation of a minor, as proposed in Virginia, may impact gang involvement in this type of criminal activity.