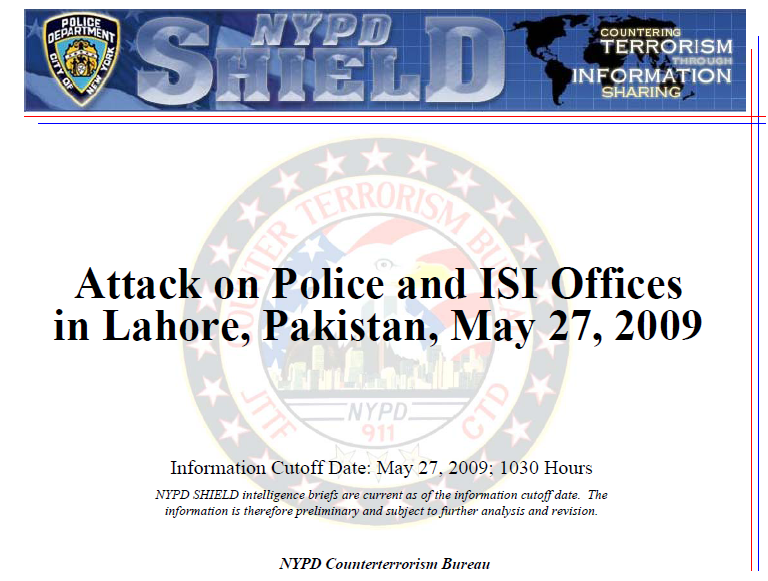 The Attack
•At approximately 1030 Pakistani time, at least four gunmen armed with assault rifles stepped from a car parked between a police emergency services facility and an office of Pakistan’s InterservicesIntelligence Directorate and opened fire.
•The gunmen tried to breach the protective barriers before the ISI building, using gunfire and grenades.
•Heavy return fire from security guards prevented the gunmen from getting any closer, and the explosives-packed Suzuki van was detonated, destroying the police facility and damaging the ISI building.
•Gunshots could still be heard in the ISI building one hour after the explosion.

Details
•An estimated 220 pounds of an undetermined kind of explosive were used in the VBIED.
•The ISI building was probably the main target, and the destruction of the police facility was collateral damage.
•There have been no claims of responsibility, but the attack is assessed to be in retaliation for the Pakistani Army’s offensive against militants in the Swat valley.

Conclusions
•The Pakistani army is engaged in a major offensive against militants.
•Many of these militants were supported in the past by Pakistan’s InterservicesIntelligence Directorate, which was probably the intended target of today’s attack
•The attack might indicate that the marriage of convenience between the militants and certain arms of the Pakistani government is over.
•This attack took place in Pakistan’s most populated and stable province, Punjab, which demonstrates that no part of the country is immune from the violence being perpetrated by the militants.
•The central government was able to turn a blind eye to the fighting that was taking place in the Federally Administered Tribal Areas and the Northwest Frontier Province, but the militants are now routinely mounting operations in what were themost secure parts of the country.
•The government of Pakistan appears to be hard pressed to providesecurity to even its own facilities.

Implications for New York
•The attack took place in the heart of a large city in the middle of the morning, when security measures should have been at their strongest.
•The barriers that were in place prevented further damage, but were not sufficient to fully protect two vital government facilities.
•The damage inflicted was heavy despite the relatively small vehicle and amount of explosives.
•High-profile “hard targets”are still at the top of the militants list.