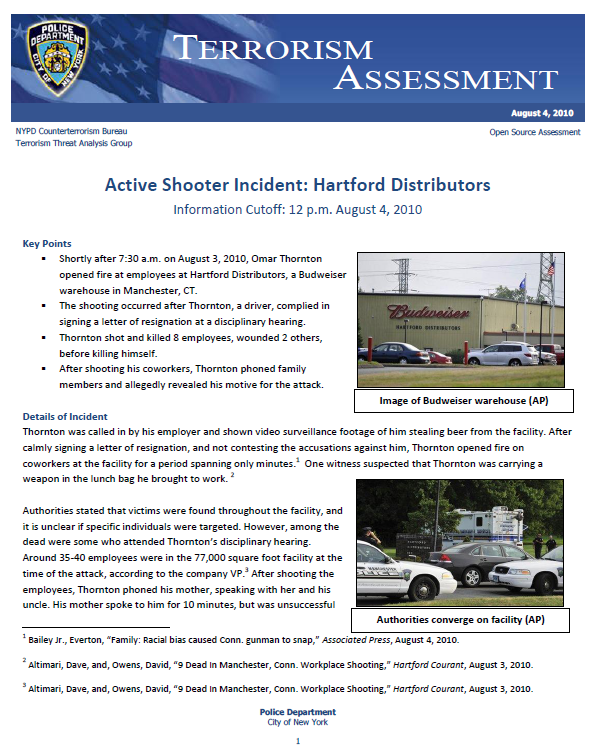 Thornton was called in by his employer and shown video surveillance footage of him stealing beer from the facility. After calmly signing a letter of resignation, and not contesting the accusations against him, Thornton opened fire on coworkers at the facility for a period spanning only minutes. One witness suspected that Thornton was carrying a weapon in the lunch bag he brought to work.
Authorities stated that victims were found throughout the facility, and it is unclear if specific individuals were targeted. However, among the dead were some who attended Thornton’s disciplinary hearing. Around 35-40 employees were in the 77,000 square foot facility at the time of the attack, according to the company VP. After shooting the employees, Thornton phoned his mother, speaking with her and his uncle. His mother spoke to him for 10 minutes, but was unsuccessful in talking Thornton out of killing himself. According to his uncle, after shooting co-workers, Thornton hid as police moved in.

According to local media, police units from Manchester and neighboring communities, including East Hartford SWAT, responded to the shooting. The scene was described as ‘chaotic,’ with employees fleeing and a fire inside the facility caused by a tipped-over forklift. Police first searched the warehouse area, and then the office of the facility where they came across Thornton, who was dead from an apparent self-inflicted gunshot wound. A police spokesman speculated that Thornton shot himself after being ‘funneled’ to an area of the building. Police later found weapons in Thornton’s car, but did not specify make or model. Employees were evacuated from the facility to a local high school.