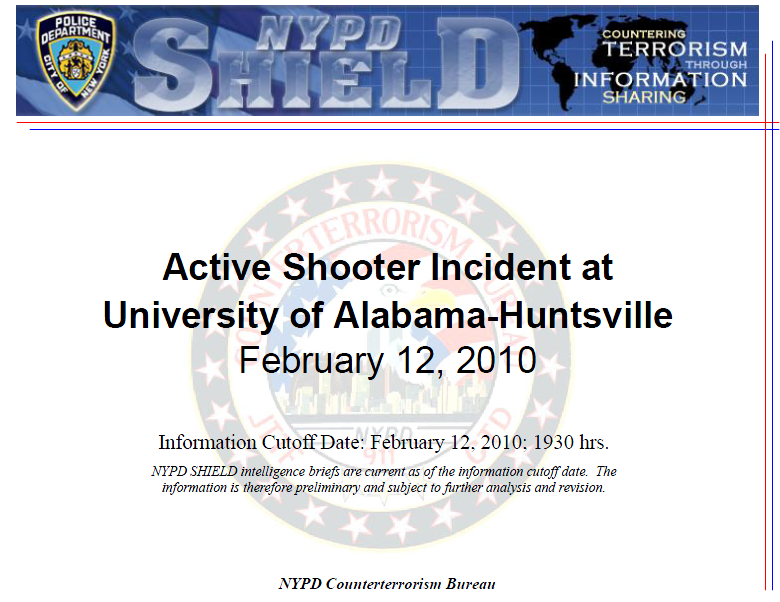 Overview
•At approximately 4 pm, local time, a female shooter opened fire on the campus of University Alabama-Huntsville
-The shooter was a female member of the university faculty
-The attack occurred at a biology faculty meeting
•Reports indicate 3 people were killed and 3 wounded
-2 male victims are in critical condition
-1 female victim is in stable condition
•The female suspect was arrested and her husband is detained
•Shooting occurred in the Shelby Center, a 200,000-square-foot science facility on the university campus
•Motive: the female opened fire when she learned she would not get a tenure faculty position as a full-time biology professor

The University of Alabama-HuntsvilleCampus
-Shelby Center
•A 200,000-square-foot science building at the university campus
•A 6-year-old, $60 million facility
•Named for U.S. Sen. Richard Shelby of Alabama and his wife, Dr. Annette Shelby

The Attack
•Five of the victims were biology faculty members and one was a staff member
•There are multiple witnesses to the attack who have been interviewed by the police
•Students reported hearing gunfire and screams from the faculty meeting room as the attack occurred
•No information on the type of weapon used
•The suspect’s identify is not yet confirmed, but some media outlets are reporting it as Dr. Amy Bishop, a Harvard trained neuroscientist and biology professor
•The University’s Biology Department webpage has been temporarily removed and a notice about the shooting is currently posted

Police Response
•The shooting was called in to police at 4:00 pm
•Police arrived on campus by 4:01pm, and residence halls were secured by 4:10 pm
•The building was secured by 4:45 pm and cleared after 5:30 pm
•Alerts are reported to have been sent out around approximately 5:00 pm on the UA Huntsville’s alert system
•Other buildings were placed in lockdown, but have been cleared
•Police search is complete and the campus is shut down until further notice
•There is a command center set up at Madison Hall, Room 109

Implications for NYC
•Active shooter attacks continue to plague school campuses, workplaces, and public venues
•Attacks by disgruntled employees can take place at any workplace and at any time
•While it is the responsibility of law enforcement to respond to such incidents, prevention and initial response to active shooter events fall upon facility security personnel and employees