The following draft “Framework for Discussion of a Policy for Privacy and Data Retention for the Joint City-Port Domain Awareness Center” was released by the City of Oakland earlier this month for public comment.  For more information on the Domain Awareness Center, see our collection of documents and follow @OaklandPrivacy on Twitter. 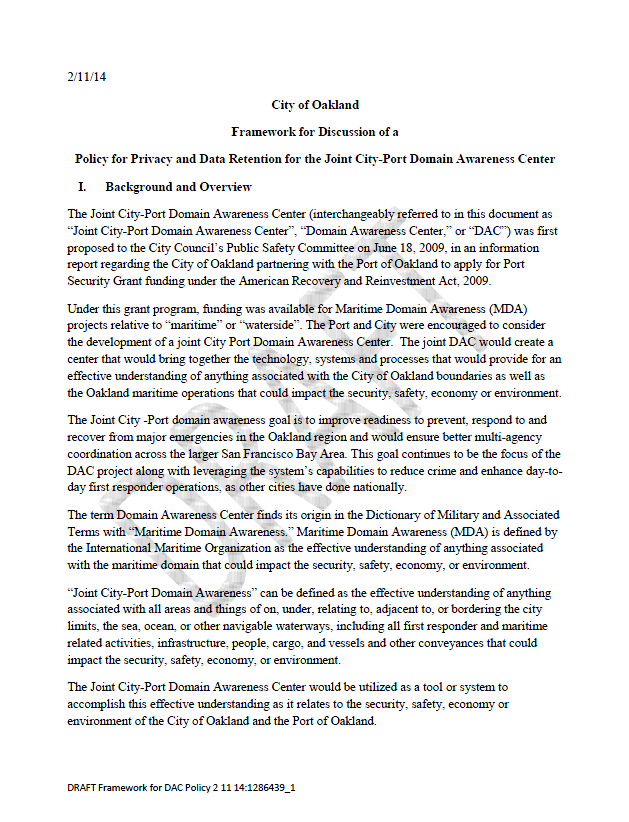 Under this grant program, funding was available for Maritime Domain Awareness (MDA) projects relative to “maritime” or “waterside”. The Port and City were encouraged to consider the development of a joint City Port Domain Awareness Center. The joint DAC would create a center that would bring together the technology, systems and processes that would provide for an effective understanding of anything associated with the City of Oakland boundaries as well as the Oakland maritime operations that could impact the security, safety, economy or environment.

The Joint City -Port domain awareness goal is to improve readiness to prevent, respond to and recover from major emergencies in the Oakland region and would ensure better multi-agency coordination across the larger San Francisco Bay Area. This goal continues to be the focus of the DAC project along with leveraging the system’s capabilities to reduce crime and enhance day-today first responder operations, as other cities have done nationally.

The Joint City-Port Domain Awareness Center would be utilized as a tool or system to accomplish this effective understanding as it relates to the security, safety, economy or environment of the City of Oakland and the Port of Oakland.

The mission of the Domain Awareness Center (DAC) is to: (1) improve readiness to prevent, respond to, and recover from major emergencies at the Port and in the greater Oakland region and (2) ensure better multi-agency coordination in response to emergencies across the larger San Francisco Bay Area.

This policy’s purpose is to protect the privacy of the general public and erect safeguards around any data captured and retained by the DAC, against improper use and/or distribution.

The Oakland City Council has placed limits on current and future technology for the DAC. Specifically, Oakland City Council Resolution 84593 provides in relevant part, the following: The City/Port Joint Domain Awareness Center (DAC) Phases 1 and 2 includes data and video feeds from the following, surveillance, security sensor and video analytics sources only: Port Video and Intrusion Detection Cameras, Port of Oakland Vessel Tracking System, City of Oakland traffic cameras, City of Oakland-owned cameras operated by the City in non-residential areas, City of Oakland Shot Spotter Audio Sensor System, and License Plate Recognition systems, and that the addition of any new surveillance, security sensor or video analytics capability, feed or data sources shall require approval of the Council, including confirmation of compliance by the DAC and all City and Port data sources with the City’s Privacy and Data Retention Policy to the extent allowed by law.

1. There is no facial or gait recognition software installed and/or planned for Phase 2.

2. Some Port security cameras have video analytics capability and these cameras are used as motion sensors for intrusion detection purposes.

3. No analytics are planned that would use biometric data to identify individuals.

4. Some Port security cameras have video analytics capability and these cameras are used as motion sensors for intrusion detection purposes. Specifically, analytics are in use to identify significant security events at the Port of Oakland such as:

a. Crossing of fence lines from public areas into secured areas
b. Unusual activity within secured areas
c. Object sensors that identify vehicles traveling far above the speed limit, which are used to alert for drag racing at the Port.

5. Future uses of analytics at the Port of Oakland could include further alerts to enhance public safety such as:

The City has equipped some police fleet vehicles with the automatic License Plate Recognition (LPR) system. LPR is used to identify vehicles by their license plates. The LPR equipped police cars are used to detect stolen cars and felons with warrants.

LPR technology is not integrated into the DAC System.

License Plate Readers (LPR’s) are used to raise alerts of license plates that are on a “hot list”. The DAC does not receive or database LPR data directly, but will receive alerts from systems that process LPR data. The LPR technology is neither currently linked to DAC nor planned for Phase 2.

The DAC receives Shot Spotter alerts from the system provider identifying geo-location and coordinates on a Geographic Information System (GIS) Map. The DAC does not receive audio data from Shot Spotter sensors. Alerts that match pre-determined criteria are stored in the DAC system as events.

The DAC does not currently have privileged access agreements with any social media provider. Privacy of social media data is controlled by each individual social media provider. Social media could be accessed by the DAC via the same methods available to the public. Individual operators of the DAC could also potentially access social media using their own means according to that individual’s employment agreement, Human Resources policy or other applicable policy. No Social Media feed is either currently linked to DAC or planned for Phase 2. Before any future integration between Social Media feeds and the DAC System, staff will return to Council for approval. If integration of Social Media feed is approved by Council, the DAC Privacy and Data Retention Policy will be updated prior to implementation.

VIII. Access to information and data obtained through DAC

Only City employees with a need to know or right to know will have access to the data gathered by the DAC. Other than staff at the DAC, any sworn or non-sworn personnel without a direct role in investigating an incident will not be permitted access to DAC data.

Under no circumstances shall the DAC be used for the purpose of infringing upon First Amendment rights. Operators of the DAC shall not target or observe individuals solely based on their race, gender, sexual orientation, disability or other classifications protected by law. The City (and any of its employees) shall not “track” the movement of an individual(s) by using the DAC system unless there is a reasonable suspicion of criminal wrongdoing.

– The City shall not use audio in conjunction with closed circuit television cameras unless appropriate court orders are obtained.
– Operators shall abide by the restrictions set forth in this policy regardless of the sources of the closed circuit television video feeds.
– Closed circuit television systems shall only be used to observe locations that are in public view and where there is no reasonable expectation of privacy.
– The City will only add additional cameras to feed into the DAC upon the approval of the City Council.
– Operators shall not focus on hand bills, fliers, etc., being distributed or carried pursuant to First Amendment rights.

Pursuant to Government Code Section 34090 the City will retain any recorded data for two years. The exception to this rule is when an incident or emergency is recorded by DAC monitoring staff that will be used for evidentiary purposes as part of a criminal investigation at which point the data retention policies of the agency that has conducted the monitoring will apply (OPD, OFD, or Port).

DAC system/equipment data for storage of outside systems

Pursuant to Oakland City Council Resolution 84593 (excerpted above in Section VI.), the addition of any new surveillance, security sensor or video analytics capability, feed or data sources shall require approval of the Council, including confirmation of compliance by the DAC and all City and Port data sources with the City’s Privacy and Data Retention Policy to the extent allowed by law.

If a private system is connected to the DAC, its data will only be stored at the DAC if an incident that is captured by that feeder system is recorded by DAC staff.

If the City provides funding for the purchase and installation of any private or quasi-public video surveillance system that is connected to the DAC, the only data storage requirement that the city will impose is that the owner/operator provide access to the footage for the city when there is a recorded incident or major crime in the area. If the private system wishes to retain data for any length of time, the data will not be subject to the City’s policies.

Before any future private video feeds are considered for integration to the DAC system, staff will return to Council for approval. If integration of such outside camera system(s) is approved by Council, the DAC Privacy and Data Retention Policy will be updated prior to implementation.

In order for the DAC staff to provide any stored data to other agencies there must be a warrant or subpoena for records from the requesting agency. Additionally, if the information, data or video that is being requested is from a third party or outside feeder source, the law enforcement agency seeking such information must go to the original source of the information to request the data, video or information.

Outside of ththosescenarios mentioned , the City of Oakland DAC staff must have a written Memorandum of Understanding (MOU) with any outside agencies for information sharing which must be approved by the Oakland City Council pursuant to Oakland City Charter section 504(l) .