Obama Executive Order: Establishment of the Council of Governors 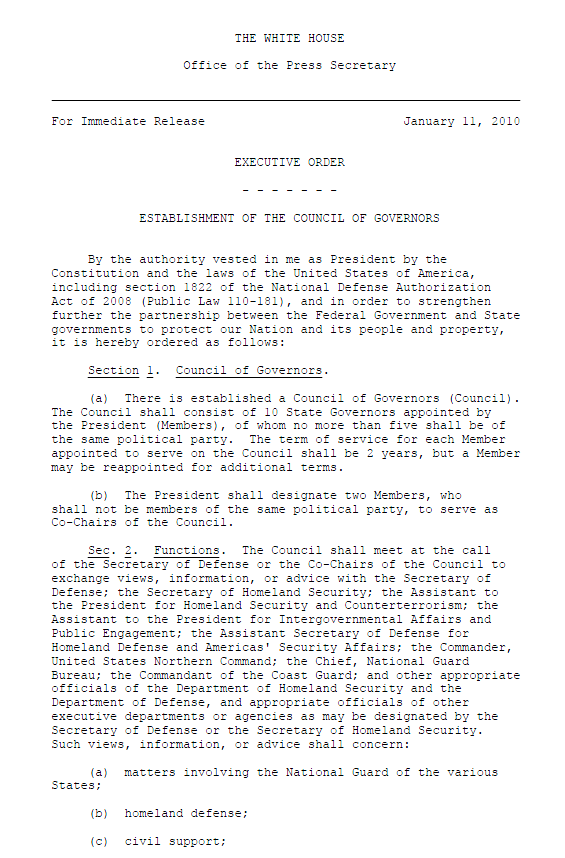 ESTABLISHMENT OF THE COUNCIL OF GOVERNORS

By the authority vested in me as President by the Constitution and the laws of the United States of America, including section 1822 of the National Defense Authorization Act of 2008 (Public Law 110-181), and in order to strengthen further the partnership between the Federal Government and State governments to protect our Nation and its people and property,it is hereby ordered as follows:

(a) There is established a Council of Governors (Council).The Council shall consist of 10 State Governors appointed by the President (Members), of whom no more than five shall be of the same political party. The term of service for each Member appointed to serve on the Council shall be 2 years, but a Membermay be reappointed for additional terms.

(b) The President shall designate two Members, who shall not be members of the same political party, to serve as Co-Chairs of the Council.

(a) matters involving the National Guard of the various States;

(d) synchronization and integration of State and Federal military activities in the United States; and

(a) The Secretary of Defense shall designate an Executive Director to coordinate the work of the Council.

(b) Members shall serve without compensation for theirwork on the Council. However, Members shall be allowed travelexpenses, including per diem in lieu of subsistence, asauthorized by law.

(c) Upon the joint request of the Co-Chairs ofthe Council, the Secretary of Defense shall, to theextent permitted by law and subject to the availability ofappropriations, provide the Council with administrative support,assignment or detail of personnel, and information as may benecessary for the performance of the Council’s functions.

(e) The Council may establish a charter that is consistentwith the terms of this order to refine further its purpose,scope, and objectives and to allocate duties, as appropriate,among members.

Sec. 4. Definitions. As used in this order:

(b) the term “Governor” has the meaning provided inparagraph (5) of section 102 of the Robert T. Stafford DisasterRelief and Emergency Assistance Act (42 U.S.C. 5122(5)).
Sec. 5. General Provisions.

(a) Nothing in this order shall be construed to impair orotherwise affect:

(1) the authority granted by law to adepartment, agency, or the head thereof; or

(2) functions of the Director of the Office of Management and Budget relating to budgetary,administrative, or legislative proposals.

(b) This order shall be implemented consistentwith applicable law and subject to the availability ofappropriations.

(c) This order is not intended to, and does not, create any right or benefit, substantive or procedural, enforceable atlaw or in equity by any party against the United States, itsdepartments, agencies, or entities, its officers, employees, oragents, or any other person.