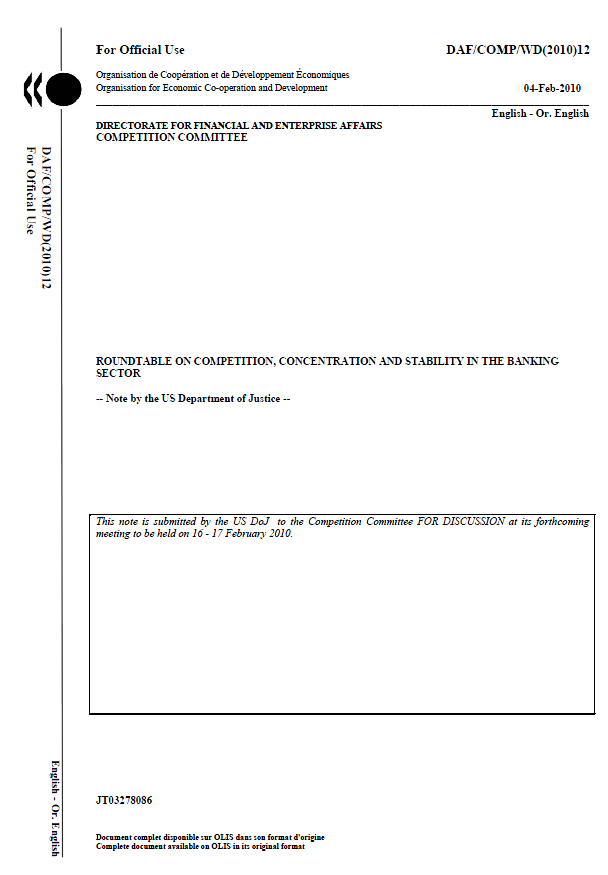 1. This paper addresses questions from the Chairman’s letter of December 2, 2009. For a more detailed discussion of the structure of the U.S. banking industry, see the U.S. Submission to the February 2009 Roundtable on Competition and Financial Markets, DAF/COMP/WD(2009)11.

2. In the United States, the federal antitrust laws generally apply to commercial banking and investment banking products and services in the same manner as to other economic sectors. Similarly, the Horizontal Merger Guidelines1 (Guidelines) of the U.S. Department of Justice (Department) and the U.S.
Federal Trade Commission apply to the analysis of mergers across sectors. Premerger notifications relating to non-bank mergers in the financial sector are filed pursuant to the Hart-Scott-Rodino Act and are analyzed under the Guidelines. For the review of bank mergers, special procedures have been
implemented. These policies are outlined in a document, “Bank Merger Competitive Review,” which is implemented jointly by the Department and the bank regulatory agencies. In the implementation of these policies, the Department applies the principles of the Guidelines and screens for bank merger transactions that would result in market concentration that exceeds the Herfindahl-Hirschman Index thresholds, thereby requiring further review.

Are the standard structural measures of competition (market shares, Herfindahl index, etc.) suitable to
measure concentration in the financial sector in your jurisdiction? If not, why?

3. The standard structural measures of concentration are sufficiently flexible to measure concentration in the financial sector in the United States. Calculating market shares and concentration, however, is only the first step in analyzing whether concentration will create or enhance the exercise of market power. With regard to banking, these measures specifically have been adopted by two of the bank regulatory agencies, as discussed in the “Bank Merger Competitive Review” document. Indeed, studies by the Federal Reserve Board staff have found that less concentrated local banking markets perform better in competition terms than more concentrated markets.5 The joint adoption of these guidelines was necessary, as the bank regulatory agencies and the Department share jurisdiction for competitive review of bank mergers and concurrently analyze the potential competitive effects of such mergers. While the Department applies Section 7 of the Clayton Act, the bank agencies, in addition to considering potential competitive effects, must consider the “financial and managerial resources and future prospects of the existing and proposed institutions, and the convenience and needs of the community to be served.”

In your jurisdiction, is competition in the banking sector measured differently than in other industries?

4. As discussed above, the federal antitrust laws and the Guidelines apply to mergers in the financial sector in the same manner as those in other industries.

How concentrated and how competitive was the banking system in your jurisdiction before the crisis? Can you refer to cases (e.g. mergers) where your agency had to review the degree of competition in the banking sector?

5. Despite the current financial situation, more than 7,000 separately insured banking entities and more than 12,000 credit unions currently operate in the United States, and most product and urban
geographic markets remain relatively unconcentrated. Most recently, in 2008, the Department reviewed the proposed acquisition of National City Corporation by PNC Financial Services; after review, the
Department and the Federal Reserve Board required divestitures to eliminate the anticompetitive effects that otherwise would have resulted from consummation of the acquisition. Investment banking markets are more concentrated but, as a general matter, these markets have been competitive.

Has your jurisdiction experienced a process of consolidation in the last decade before the crisis? If consolidation took place, please explain the reasons behind this process.

6. During the period 1994 through 2006, the Department reviewed more than 1,000 bank acquisition/merger applications annually. Changes to federal statutes in 1994, allowing for interstate expansion/branching and allowing bank holding companies to engage in a wider range of activities closely relating to banking, affected the number of such transactions. Additionally, in 1999, the Gramm-Leach-Bliley Act allowed for a new entity, a financial holding company, to affiliate bank holding companies, banks, insurance companies, securities firms, and other financial institutions under common ownership.

What policies were implemented to facilitate/hinder the consolidation process, if any?

7. As explained above, the enactment of certain statutes greatly expanded the geographic areas and the scope of activities within which financial sector companies could compete. Along with these came new
restrictions, as the relaxation of geographic entry barriers was accompanied by a national deposit cap of 10 percent for any one bank and a default state deposit cap of 30 percent, with the option for any state to impose its own less restrictive deposit cap. Attendant upon these statutes was an overall approach of less regulation or self-regulation, as evidenced by the 1999 Gramm-Leach-Bliley Act13 repeal of the restrictions separating commercial banking and investment banking that had been codified in the Glass-Steagall Act of 1933.

How did the consolidation process, if any, affect the degree and nature of competition among financial firms in your jurisdiction?

8. Based on the Department’s antitrust review of proposed acquisitions and actions taken to remedy the potential competitive effects of such acquisitions, competition among U.S. financial firms remains
robust.

Have banks or financial institutions merged as a consequence of the crisis? If yes, what was the analysis of your agency on the relation between concentration and competition? Was this analysis in any way different because of the particular situation created by the systemic crisis?

9. The financial crisis resulted in some mergers of U.S. financial institutions, as less stable firms were acquired by those that were better prepared to withstand the crisis. In analyzing the potential effects
of such acquisitions, the Department applied the same antitrust principles and analytical framework that it applies in every merger review. One example is the expedited review of the acquisition by PNC of the financially distressed National City Corporation, in which the Department required significant divestitures to eliminate any anticompetitive effects.