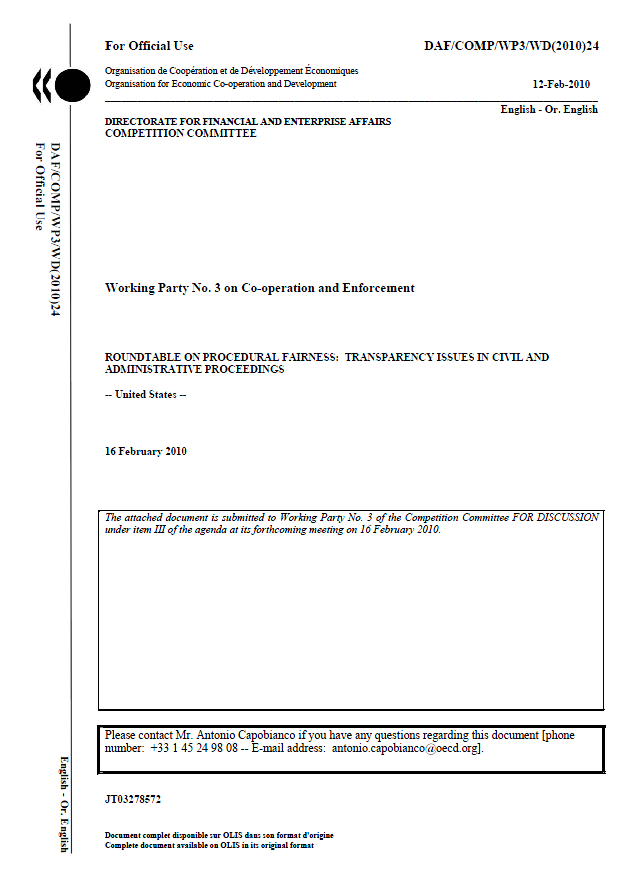 1. Substance and process in government antitrust investigations go hand in hand. Regardless of the outcome of an investigation, concerns about process create the impression that substantive results are flawed, whereas a fair, predictable, and transparent process bolsters the legitimacy of the enforcement outcome.

2. This submission provides an overview of the practices of the Antitrust Division of the U.S. Department of Justice (“DOJ”) and the Federal Trade Commission (“FTC”) (together, “the Agencies”) with regard to transparency and procedural fairness. Part I discusses transparency with respect to substantive standards and agency policies and procedures. Part II discusses open and frequent dialogue with the parties, and Part III addresses the closely related issue of informing parties of the allegations against them in a timely manner. Parts IV and V describe the opportunities that parties are given to respond to agency concerns and to be heard prior to an adverse decision. Part VI addresses the length of antitrust investigations, and Part VII summarizes the Agencies’ practice with regard to the publication of decisions.

3. Although the Agencies’ investigatory processes are similar, their enforcement processes differ procedurally. DOJ is a cabinet department of the U.S. government, and must initiate an enforcement action in an appropriate U.S. district court. The court determines whether the law has been violated and
orders any relief or remedy required. The FTC is an independent agency that enforces competition and consumer protection laws and may use its own administrative processes, codified in Part III of its rules, to enforce the law. Under this process, the Commission, following a full investigation, issues an
administrative complaint, which initiates an enforcement proceeding that is overseen and resolved by an administrative law judge, subject to review by the full Commission and, ultimately, a U.S. court of appeals. The FTC thus exercises both prosecutorial and judicial, functions. The FTC may seek a preliminary injunction in U.S. district court in aid of the administrative proceeding, e.g., to block a merger before it is consummated. The Commission’s process affords respondents procedural rights that are quite similar to those in a court proceeding. Thus, even though the Agencies’ processes differ, both agencies provide procedural fairness to subjects of enforcement proceedings.

1. Transparency of substantive standards and agency policies and procedures

Congress . . . did not intend the text of the Sherman Act to delineate the full meaning of the
statute or its application in concrete situations. The legislative history makes it perfectly clear
that it expected the courts to give shape to the statute’s broad mandate by drawing on commonlaw
tradition.

5. The extensive body of court decisions under the common-law system is an important way that substantive legal standards become known and transparent to the business community, lawyers,
economists, and consumers.7 In addition, the FTC, through its administrative enforcement process, contributes to the body of decisional law interpreting the Clayton and FTC Acts.