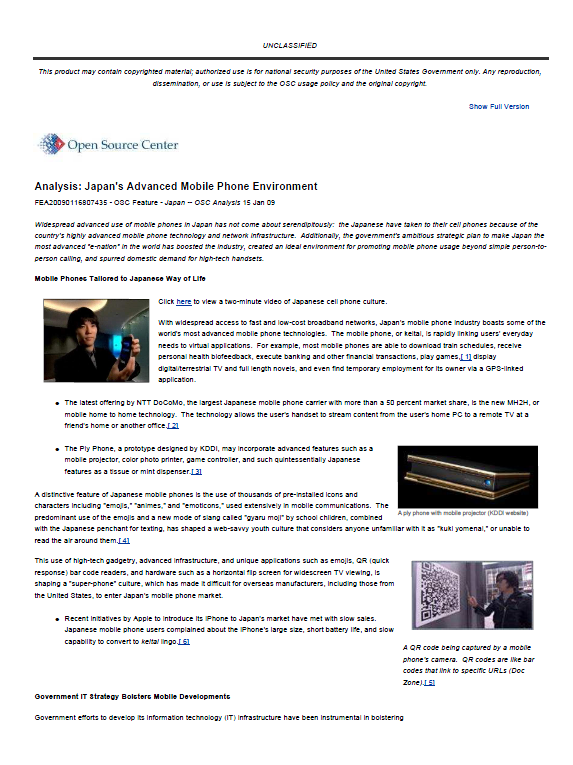 Widespread advanced use of mobile phones in Japan has not come about serendipitously: the Japanese have taken to their cell phones because of the country’s highly advanced mobile phone technology and network infrastructure. Additionally, the government’s ambitious strategic plan to make Japan the most advanced “e-nation” in the world has boosted the industry, created an ideal environment for promoting mobile phone usage beyond simple person-toperson calling, and spurred domestic demand for high-tech handsets.

With widespread access to fast and low-cost broadband networks, Japan’s mobile phone industry boasts some of the world’s most advanced mobile phone technologies. The mobile phone, or keitai, is rapidly linking users’ everyday needs to virtual applications. For example, most mobile phones are able to download train schedules, receive personal health biofeedback, execute banking and other financial transactions, play games, display digital/terrestrial TV and full length novels, and even find temporary employment for its owner via a GPS-linked application.

A distinctive feature of Japanese mobile phones is the use of thousands of pre-installed icons and characters including “emojis,” “animes,” and “emoticons,” used extensively in mobile communications. The predominant use of the emojis and a new mode of slang called “gyaru moji” by school children, combined with the Japanese penchant for texting, has shaped a web-savvy youth culture that considers anyone unfamiliar with it as “kuki yomenai,” or unable to read the air around them.

This use of high-tech gadgetry, advanced infrastructure, and unique applications such as emojis, QR (quick response) bar code readers, and hardware such as a horizontal flip screen for widescreen TV viewing, is shaping a “super-phone” culture, which has made it difficult for overseas manufacturers, including those from the United States, to enter Japan’s mobile phone market.

While some observers might attribute the widespread usage of mobile devices in Japan to cultural phenomena, such as reliance on public transportation giving the average Japanese commuter more time for personal communication, a study by Infinitia, a telecommunications market research company in Japan, attributes the strength of the market solely to technical reasons.

Government efforts to develop its information technology (IT) infrastructure have been instrumental in bolstering Japan’s mobile industry. According to a Japanese Ministry of Internal Affairs and Communication white paper and online trade media sources, after an economic downturn a decade ago, Japan’s government initiated a plan to provide a variety of government incentives to industry to create what the government believed would become the most advanced e-nation in the world. These incentives included funding, human resources, technical assistance, tax relief, and subsidies for start-ups and ventures. In addition, the government deregulated the industry and has removed many obstacles to domestic competition.