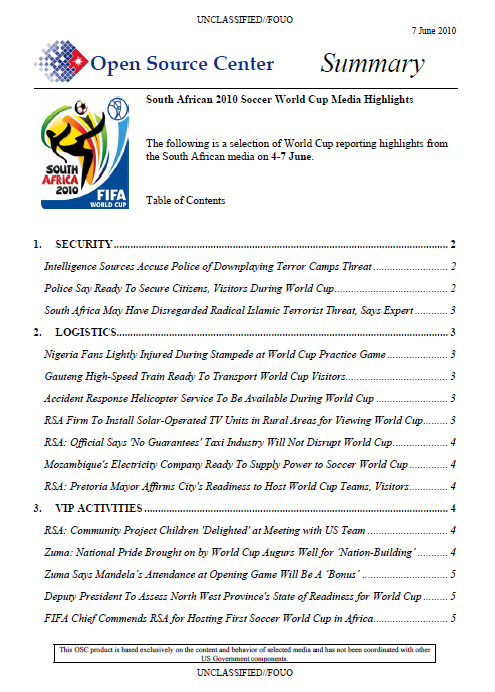 Intelligence Sources Accuse Police of Downplaying Terror Camps Threat — Sunday Times reported on 6 June that director of the NEFA Foundation Ronald Sandee said police officials denial of the presence of terror training camps “is reason to believe they don’t have their apparatus under control” especially because South African police intelligence have “reports containing detailed information about the terror training camps”. The Sunday Times report added that it has seen correspondence from a former trainee stating he was “personally … exposed to training camps” and centers in KwaZulu-Natal, Gauteng and the Eastern Cape which “is one of many that recruit innocent black South Africans into something they do not know”. Local intelligence sources who confirmed the existence of camps and cells said “the only way to eliminate the threat at this stage is to identify extremists in conjunction with foreign intelligence agencies, and technology”. (AFP20100606521015 Website of the most popular South African weekly paper known for its investigative reporting)

Nigeria Fans Lightly Injured During Stampede at World Cup Practice Game — On 6 June SAPA reported that thousands of football fans, many wearing Nigeria jerseys, stampeded the gates outside the Makhulong Stadium in the Johannesburg before a World Cup practice match between Nigeria and North Korea. A policeman was hurt in the crush and was later taken away on a stretcher. Other fans who appeared to be lightly injured walked away from the scene. (AFP20100606521013 Cooperative, nonprofit national news agency)